6-Year-Old's Painful Bulging Head Is Killing Him Slowly, He Needs 3 Surgeries To Live 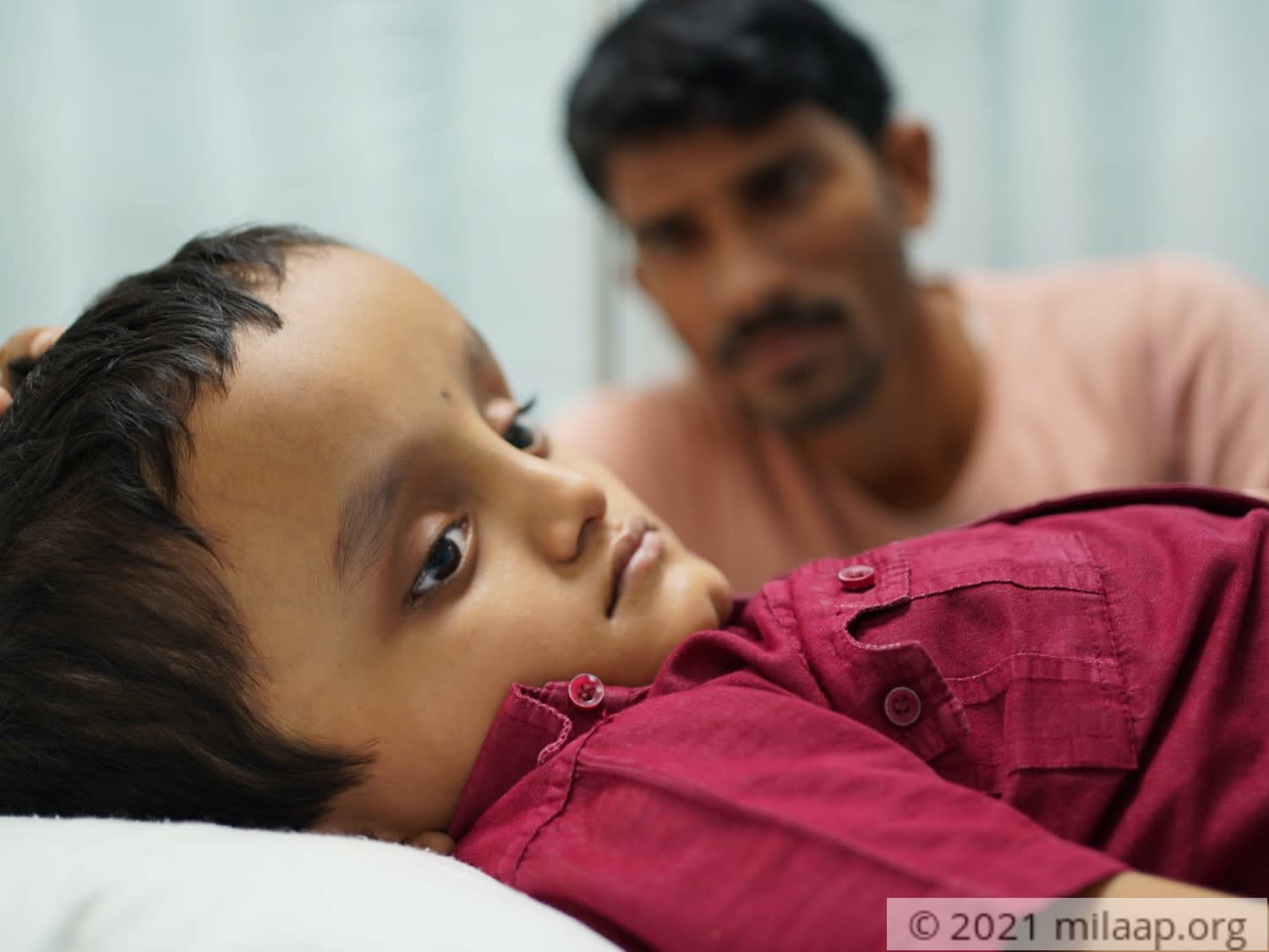 Share
6-year-old Pranit is helpless. He can’t walk, sit or even move due to a disease that is now killing him slowly. His head is enlarged and he whimpers in pain. Pranit’s parents have done everything in their power to keep him safe so far, but now his life is in danger. Only surgery can save him, but they can’t afford it.

3 severe conditions have left him bedridden

“Just a few weeks after her birth, everyone started noticing that his head was getting bigger than the rest of his body. We didn’t know what or how that was happening, and we rushed him to the hospital. After the tests were done and the results came in, the doctors tried to explain to us the ailment but we just couldn’t understand it. All we knew was that he needed surgery for it but no matter how much we tried, we couldn’t get him treated.” - Sainath, father

Pranit suffers from Congenital Hydrocephalus, a buildup of excess cerebrospinal fluid (CSF) in the brain at birth. Along with that, he suffers from a Chiari malformation and Syringomyelia, both of which affect the brain and the spinal cord. His sickness has snatched his childhood from him.

Only surgery can save his life now

Over the years, Pranit’s problems only grew. Because of the extra weight of his head, he cannot walk, eat on his own, or do any other routine activity. He is bedridden and barely able to move his legs due to the cyst in his spinal cord.

“We tried sending him to a regular school. But when he was in Class 1, the school teacher asked us to not send him unless someone can accompany him to school and be with him the whole time. But how is that possible? Every time Pranit sees someone his age, playing with other kids in the neighbourhood, he gets disheartened. He asks me ‘When can I play like them, mumma?’, and I have no answer for that. But this surgery can give him a normal childhood.” - Vidhya, mother

Pranit needs 3 surgeries, over a period of 2 months,  to completely recover. The treatment will cost over 20 lakh rupees. For a family that eats hand to mouth, this sum is impossible to arrange. Sainath is a daily-wage labourer who hardly earns 250 rupees a day. With the ongoing treatment in Nagpur, he is barely able to manage even the expense of food.

“He is our only child and we want him to live a healthy and normal life. We tried relentlessly for the last 7 years to afford the surgery but were not able to, you are our only hope. Doctors say that if we delay any further, it will affect his mental state as well. I wish I could do something to afford this surgery but...but I am helpless. Please help us!” - Sainath