All Alone And Helpless, This Farmer Is Running Out Of Time To Save His Son's Life | Milaap
loans added to your basket
Total : 0
Pay Now

All Alone And Helpless, This Farmer Is Running Out Of Time To Save His Son's Life

Shares
Shares
Share on whatsapp
Little Pankaj has the brightest smile. He has just learnt to say Baba (father) and Aai (mother) recently and is picking up new words with every passing day. He does not have many toys to play with, owing to his family’s poverty, but that does not make him sad. Running around his small house and pulling his sister Pankaja’s hair is enough to make him jump with joy. But Pankaj is not a healthy child as most people assume.


“He is very sick. He needs a bone marrow transplant to lead a normal life like other children, but we don’t have the means to afford it,”-Datta Rode, father of 2-year-old Pankaj.

Pankaj becomes inconsolable when he gets injections, the complete opposite of what he normally is

One day when Pankaj was just 7 months old, he started appearing very weak – he had stopped crawling properly and even stopped eating food altogether. Added to this, his face started turning very pale, and his parents rushed him to the hospital. After blood tests, it was revealed that he had thalassemia, a severe blood disease where the body does not produce enough hemoglobin. A bone marrow transplant is the only curative treatment for this, but it costs lakhs of rupees which is beyond this family’s reach.


“Ever since then, he needs blood transfusions every 25 days or he becomes very ill. Being very poor, I have to borrow money just to take him to the hospital for these transfusions. He hates the hospital and cries just as we arrive at the entrance. I wish we find a way to end his suffering,”-Datta

‘I have asked everyone in the village, but nobody is willing to help me in these tough times’

Pankaj, his mother Sharda, sister Pankaja and father Datta live in a small town called Paithan in Aurangabad, Maharashtra. Datta, a farmer who harvests wheat on his 2-acre land is the sole breadwinner. He earns Rs 6,000 every month and has to feed his family and take care of other household expenses on this meagre income. Ever since he found out that his son needs a transplant, he has been trying to garner help, without avail.

“I am trying to sell my land, but it has not been successful so far. I am begging each and everyone I know in the village for help, but nobody is willing to. They don’t understand my plight. Please help me,”-Datta.

With your kind contribution, Pankaj can undergo a bone marrow transplant and live a normal life 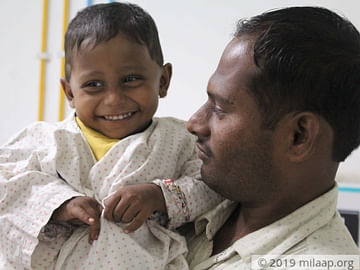 He looks normal, but he is suffering from a deadly disease

UPI: givetodattarode1@yesbankltd (Copy to clipboard)
Or
Click here to read the instructions before you make a bank transfer.