This Father Will Lose His Son To Liver Disease In A Week If He Can't Afford His Transplant | Milaap
loans added to your basket
Total : 0
Pay Now

N
You are sending a message to
Nagendra
Go back

“He vomited blood last week, again. His condition is very bad – doctors told us clearly that without a transplant in a week’s time he will not survive. My son now knows he is sick. He asks me things like ‘Will I die Nanna? Is my liver fully gone? Why didn’t you tell me earlier?’ and burst into tears. I didn’t know what to tell him,”-Dasharadha, father

Whenever Srinivas asked his parents why he vomited blood and why he was not able to go to school, Dasharadha and Bhagyalaxmi would tell him lies. They would either say that he had an infection that will be fine soon or a fever that lasted too long. But recently he overheard a conversation between his father and the doctor where they talked about his chronic liver disease – and he was shocked. He fears death now and cannot even sleep peacefully at night thinking about it. Only a liver transplant can save him, but his poor father has no means to afford it.

2 years ago, Srinivas was not the weak, frail boy that he has become now. He loved the outdoors and would play for hours together with his neighborhood friends and sister Srikanya (13). But 2 years back, after he started getting persistent jaundice everything changed. He started taking leaves more frequently, and eventually stopped going to school. He also started vomiting blood.

“We took him to Hyderabad and that’s when the doctors told us about his damaged liver. From then onwards, he stopped going to school regularly. The days that he went – he would come back weak and tired as he could not walk for very long. 2 weeks back, he stopped going completely,”-Dasharadha

Medicines were keeping him alive till now, but they're not enough anymore

All this while, Dasharadha and his wife Bhagyalaxmi have been begging doctors to sustain his life on medicines as they could not afford an expensive transplant. They prayed for strong medicines alone to cure their child’s illness and kept postponing the transplant, but as fate would have it, he just got worse with time. Now he needs it at the earliest, but his parents are left with no money for the medicines itself and cannot save him.

This father needs your help to save his son

Working as daily wage laborers on other’s farms, Dasharadha and his wife earn Rs 500 as combined wages per day. But work is not available every day and so they end up making only less than Rs 10,000 a month. Their house rent itself amounts to Rs 2000 and with the remaining Rs 8,000 they have to manage household expenses. They did not have any savings because of this. And now, they have absolutely nothing to afford his liver transplant.

“I am ready to give a piece of my liver to my son to save him. But we need money urgently. We are waiting desperately at the hospital for help of any kind,”-Dasharadha

With your kind contribution, Srinivas will be able to beat his liver disease and lead a normal life 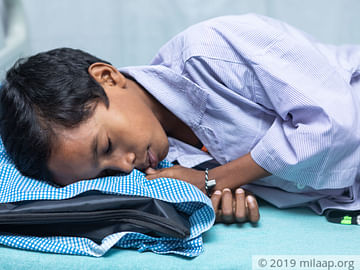 He Needs A Liver Transplant In a Week To Survive

UPI: givetopdasaradha1@yesbankltd (Copy to clipboard)
Or
Click here to read the instructions before you make a bank transfer.