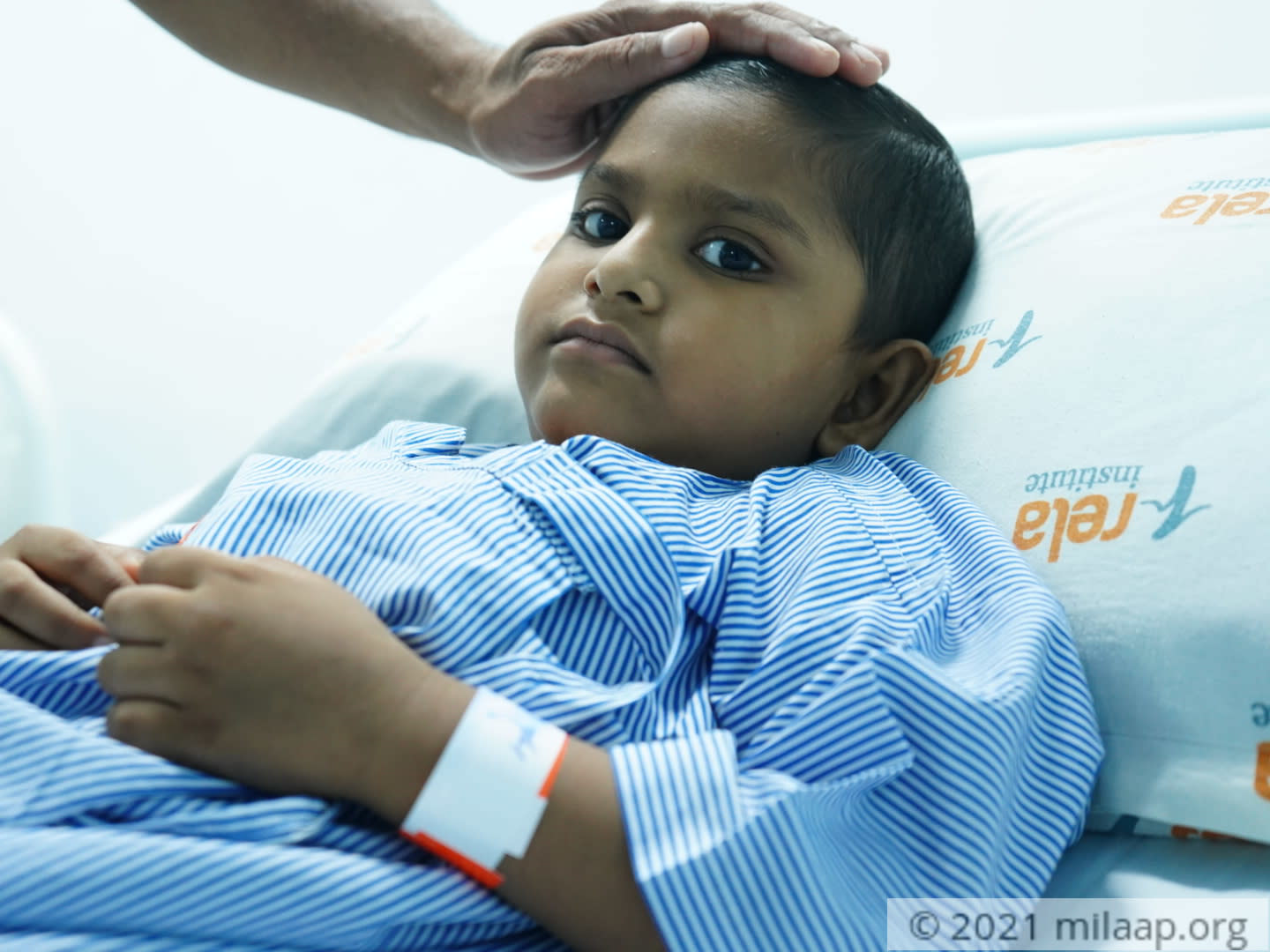 Share
"I work at a pharmacy store and so many people come to buy medicines for cancer from us. Even in my worst dreams I couldn't have imagined that one day, my own son would be needing those cancer medicines and that too not just once but twice."
- Sumon, father

They took out a 7.7cm tumour from his abdomen

Sumon and Monira, Obaydul's parents, had returned to Bangladesh after his first surgery in 2019, where the surgeons had extracted a cancerous tumour from his abdomen of nearly the same size as that of an orange fruit. After a few months in April 2020, Obaydul complained of the same shooting pain in the abdomen and his fever was not going despite medicines.

Things got extremely concerning when he started to vomit blood but despite all efforts, his parents couldn't do anything because of the freshly imposed lockdown due to COVID. It took them a year to know that his tumour had relapsed and that their little kid urgently requires surgery costing about 8 lakhs which they can no longer afford.

To get rid of this aggressive cancer, they have to operate on his liver

"His cancer is so aggressive that despite a critical surgery, it relapsed in less than a year. It is underneath his liver at such a sensitive spot that the doctors have to operate on his liver. They have already warned us that the more we delay, the higher the risk of this cancer spreading to his brain and other organs. Now if we fail to get his surgery done within a week, I'm scared to even utter what can happen to my only child."- Monira, mother

5-year old Obaydul suffers from a Neuro-Ectodermal tumour and needs surgery to remove a part of his liver. A rare tumour, it can not only spread but can also compress or invade his adjoining organs, if left untreated. It has already affected his liver and now it has a risk of spreading to his brain, spinal cord and the nervous tissues.

"Throughout his time in the hospital, he never missed his Namaz. He has learnt all the Islamic recitations from me and now when I cry, he recites them to cheer me up. He is so pure at heart that he keeps assuring me that he will be fine soon. It breaks my heart to see this innocence of his but he isn't aware that we needs lakhs of rupees for this surgery to happen and his Baba is struggling with it. "- Sumon, father

His innocence despite such pain breaks his parents' heart

Obaydul has been fighting this dangerous cancer since he was just 2 years old. He had recovered after a surgery earlier but in a cruel turn of events, his cancerous tumour relapsed and now he is grappling with life again. His parents have spent close to 30 lakhs when he was first diagnosed with it. For them, this surgery is the only chance to save their son but they need 8 lakhs for it.

Obaydul is hopeful that he will get cured and now only you can help him turn his hopes into reality. His innocence while dealing with this harsh pain makes his parents' helpless. Please contribute here.
OI
Patient Obaydul Islam is 5 years old, living in Kolkata, West Bengal
RI
Being treated in Rela Institute, Chennai, Tamil Nadu