Fractured Spine In An Accident Can Paralyze This Kabaddi Player For Life | Milaap
Receive tax benefits by donating to this cause. 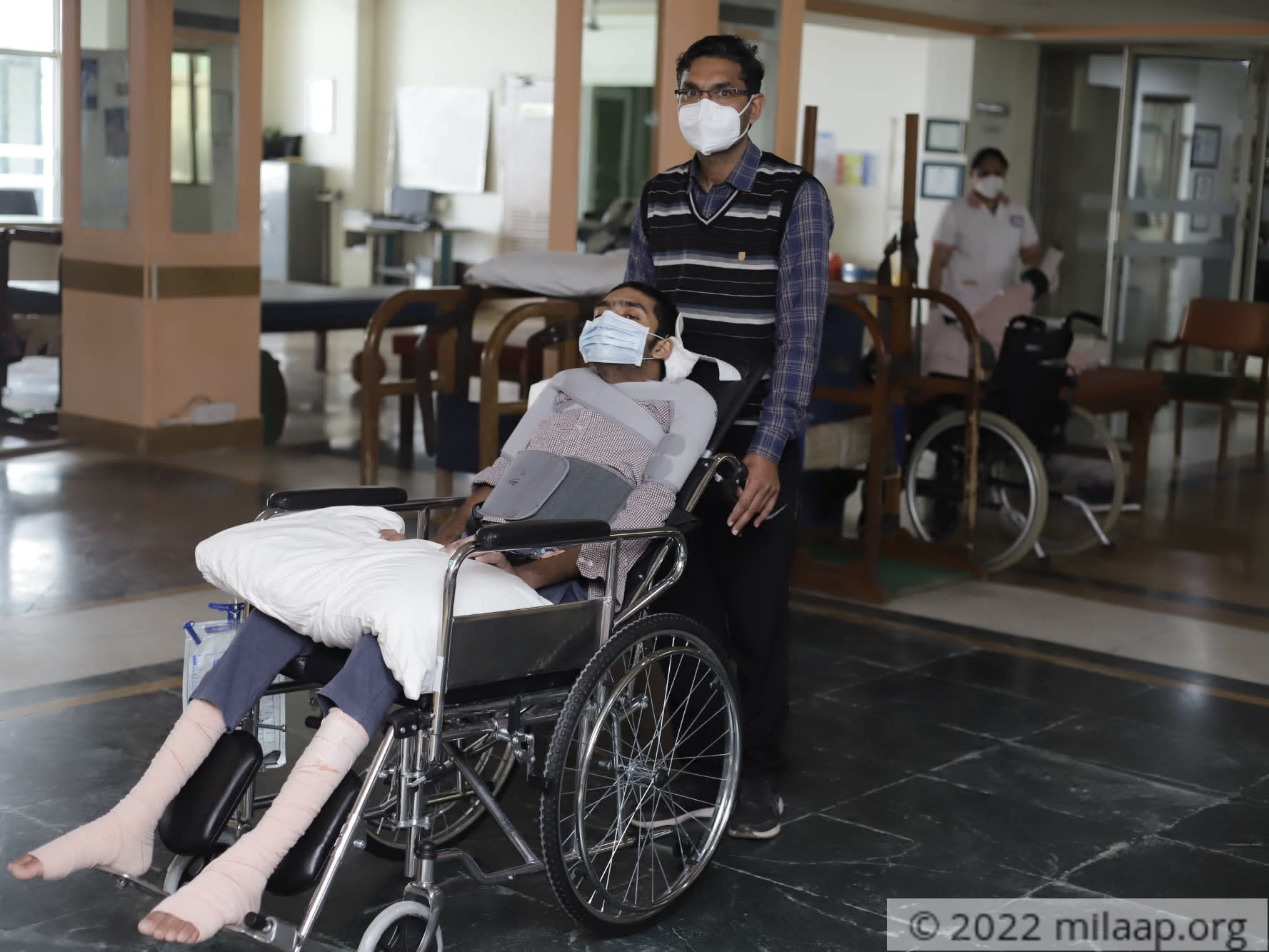 A District level Kabaddi player, Nitin, is lying motionless on the hospital bed for 4 months. An unfortunate accident has jolted this 17-year old teenager who needs a critical spine surgery to be able to move again.

"I fell off and blacked out when I was returning from a wedding with my uncle. A car, out of nowhere, rammed our bike and uncle had to hit the brakes abruptly to avoid a fatal collision. For months, I'm just lying on the hospital bed like a vegetable and being a burden on my poor parents. If this is how the rest of my life will be, then I don't want to live anymore. I wish I had not stepped out of my house that unfortunate day."- Nitin

Crowd gathered at the accident spot, as he laid unconscious on the road

A mob had gathered at the accident scene and it took Nitin's parents 5 hours to reach the hospital from the village. Upon reaching, the doctors informed them that Nitin needs surgery because of a Cervical Spine Fracture. Unaware of what lay ahead, Rajveer and Rekha were of the opinion that their son would take just a few weeks to recover and start his Kabaddi tournaments again until Nitin was paralyzed.

Today, Nitin's motor skills have been severely impaired to the point where he is unable to move, walk or lift his hands. Only gears and belts can hold his body upright. Even after one spine surgery, he needs another complex surgery costing Rs.10,76,000 in the next few weeks, failing which Nitin will lose the only chance to ever walk again.

Being held upright with support, he will be bed-ridden forever without a surgery

Being a sportsperson, Nitin's parents had gotten used to his bruises and cuts, thinking it to be just another injury. They used up all their savings for Nitin because their life would hold no meaning if their son would have to be bed-ridden for life.

"I thought it was just like a normal fracture and in a matter of a few weeks, he would be up and moving. Infact, since Nitin has always been so active in sports that I thought he would recover much faster. But when the doctors told us to gather 22 lakhs for his surgery, I was perplexed. That's when I panicked that something very terrible has happened to my son. I sold everything to save my son once but for another big surgery, I have nothing left now "- Rajveer, father

Nitin with his Kabaddi team

He used to defeat Kabaddi opponents twice his size, now he can't even move his finger

Nitin has been bed-ridden for 4 months now in the Indian Spinal Injuries Centre, breaking down in tears each time he sees his mother sobbing. Running out of patience, all he keeps asking his Ma is if he will ever be able to get his previous life back.

"Bound to the bed all these months, he has been passing time by watching videos of Kabaddi matches on his phone...just wondering if he will ever be able to walk again. A few months ago, he would defeat opponents twice his size but today my son is struggling to even move his finger. It's been 4 months and we are still struggling to arrange 11 lakhs more, now his morale is crushing. He has pinned all his hopes on this surgery and passing every single day without it is tormenting him."- Rekha, mother

With his whole life ahead of him, it is unfortunate for any 17-year old to helplessly undergo such a traumatic situation. A bright student, who was dreaming for a life in the Indian Army, is now uncertain if he will ever be able to leave this hospital bed. The damage in his spine can only be corrected if his surgery is done in the next few weeks, else it will be too late for Nitin to ever see himself walk again. Due to absence from work for months, Rajveer has lost his job as a field boy and is hardly in a position to afford 11 lakhs more.

Please help 17-year old Nitin get a spine surgery as only that can help him stand back on his feet now.
NB
Patient Nitin Bainsal is 17 years old, living in Palwal, Haryana
IS
Being treated in Indian Spinal Injuries Center, Delhi