Widowed Mother Blames Herself For Being Unable To Save Her | Milaap

Widowed Mother Blames Herself For Being Unable To Save Her Daughter 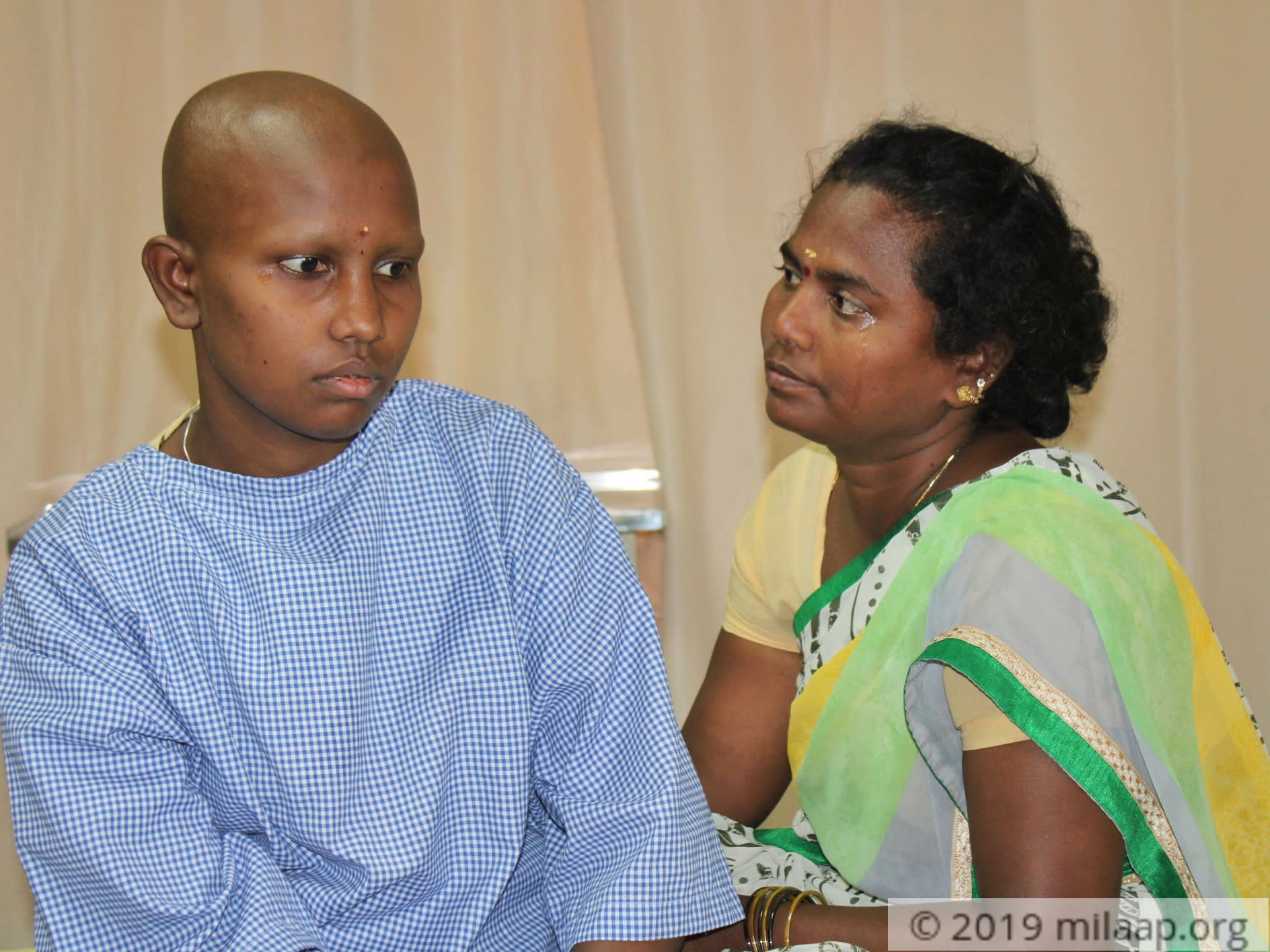 Share
“Six months after my husband died, Nithya’s cancer was diagnosed. The first thought I had was that I’m going to lose her too. I only expected the worst because that’s all we’ve ever seen - poverty, illness and death. But I have to stay strong for my daughter, I’m a mother after all. I'm more scared now than I’ve ever been, but I try not to show it to Nithya. We will fight this together.”
– Sheela, mother

For 4 months, the tumour kept growing – but Nithya couldn’t get treated straight away

Nithya’s (17) cancerous tumour was diagnosed when her left leg started swelling up. It started out as just a swelling, but then the pain began, and soon she couldn’t walk at all. However, even after the bone cancer was diagnosed, Sheela couldn’t start Nithya’s treatment. How could she when she’s neck deep in debt?
“I kept her at home for 4 months, because I had no money to even take her to the hospital. I had no other choice… I went to so many people, begging them for money. I had already borrowed 2 lakhs for my husband’s treatment, so no one would lend me any more. But I still kept trying, I didn’t think of how I’m going to pay it all back. All I knew was that I can’t let my daughter die before my eyes.”
Eventually, Sheela somehow managed to borrow some money and started Nithya’s treatment 3 months ago. But Nithya needs continued chemotherapy, followed by a surgery to remove the tumour in her left leg. Sheela is once again helpless.

Nithya is a bright young girl. She has always been interested in all her lessons in school, and wants to join the army someday. Even though she knows she has cancer, and could lose her leg to it without treatment.

“I haven’t hid anything from her. What is the point? I don’t want to lie to her. How will she fight this dreadful disease if she doesn’t even know what it is… She begs me to save her leg. She is positive she will fight it. Her friends from school keep calling her, they say they pray for her to get better every morning. She believes their prayers will get her through…”

Sheela’s husband died of liver failure over 1.5 years ago. Despite all their best efforts, and borrowing from everyone they knew, they couldn’t save him. Now, Sheela works as a cook in others’ homes for Rs. 1100 per month, with which she has to take care of 5 children. But it’s been 3 months since she has gone to work.

“I can’t send my children to school anymore, I can’t feed them… Sometimes I can't help but think - what kind of a mother am I? I’m trying my best. But my best isn’t enough. Everything is on my shoulders now… I can’t do this alone. I have so many people to pay back, Nithya’s treatment is more than I will ever be able to afford.”
Sheela has been Nithya’s rock through everything. During her father’s death and now through her illness. But Sheela can’t do it on her own. She needs your help to save Nithya’s leg and life from cancer. Else, she could lose her daughter to this dreadful disease.
NP
Patient Nithya P is 17 years old, living in Bengaluru, Karnataka
SS
Being treated in Sri Shankara Cancer Hospital And Research Centre (A Service Unit Of Sscf), Bengaluru, Karnataka