Help 4-year-old Nitharshan Fight A Fatal Disease That Causes His Body To Swell Up | Milaap
loans added to your basket
Total : 0
Pay Now

You are sending a message to
Joshin
Go back

"When people see my son, they say he is so chubby and cute. If only they had seen him before, they would understand that his disease has made him unrecognizable, and it is swelling not baby fat. He is in pain!"

Nitharshan is 4 years old. He was once a happy and mischievous child. Now he just begs his parents to let him go to school. It breaks their heart, but they have to keep him home in a sterile environment as Nitharshan has a rare autoimmune disease. It took his little sister's life. Now, his parents are fighting to keep him alive.

A fever made them fear for his life

Viakundamani, Jenifa, Nitin, and Nitharshan live in Kalkulam Taluk, Kanyakumari. Here, Viakundamani works as a mason for half a month, earning about Rs. 700/day. For 2 weeks, he tries to pick up odd jobs to support his family. This family has gone through a tough time ever since they lost their first daughter.

"10 years ago, my daughter, Nithu, also suffered the same disease and died on the age of one and half years. Nitharshan began having the same symptoms. High fever. For 2 months we were in and out of the local hospital without any answers. Afraid to lose him too, we decided to go to Kerala. By then, his entire body began to swell up."

Nitharshan was once a healthy-looking child. By the time his parents got him to KIMS in Kerala, they could not recognize him. The doctors ran tests and found that he had an enlarged liver and spleen but could not deduce the underlying problem.

"After countless blood tests, 2 painful bone marrow tests and 1 liver biopsy all they could say was that he had a blood infection. They referred us to CMC. By mid-March, we had to run all the tests at CMC again and a bone marrow biopsy. Finally, we had the answer. Nitharshan was born with a life-threatening genetic autoimmune disease."

His body is attacking him

Hemophagocytic Lymphohistiocytosis (HLH) is a condition in which the body makes overactive immune cells causing too much inflammation. Normally, these immune cells would destroy infected, damaged cells in the body. In HLH, the immune system begins to damage the patient’s own tissues and organs, including the liver, brain and bone marrow where blood is made.

"We understood where the swelling is coming from. We understood that he cannot go out and play like other kids because his own body is attacking him. If he catches germs, it is even worse. I will lose my son if we cannot fix this soon."

There is a small window to cure him

Nitharshan's sister had the same genetic disease. Her condition deteriorated much before the parents could even have her diagnosed. They could not save her. Nitharshan has very little time. He needs a stem cell transplant to beat this disease. This family is not in a state to fund the transplant.

'I want to go to school' he says, with a bag of books in his little hands. My heart breaks! Jenifa wanted to commit suicide with the whole family because we cannot afford to save him, and we cannot bear to lose him.

At 4 years, he is in excruciating pain from the inflammation. These parents are struggling to relieve their son's pain. The cost of this surgery is Rs. 14 Lakhs. Although they had help from family for bills until now, nobody can afford lakhs. Viakundamani and Jenifa have already sold their land and jewelry. They have exhausted the money on diagnosis.

Your contribution can gift Nitharshan the life he desires. 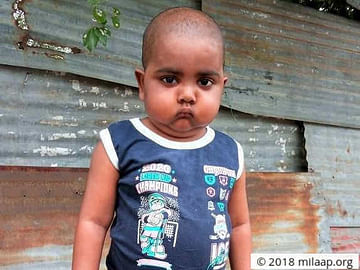 Baby Nitharshan has a fatal autoimmune disease. His parents need your help to save him.

UPI: rzpy.givetomlpnitharsh001@hdfcbank (Copy to clipboard)
Or
Click here to read the instructions before you make a bank transfer.