Born With A Head Twice The Size Of Normal, This Baby Is Struggling To Survive | Milaap

Born With A Head Twice The Size Of Normal, This Baby Is Struggling To Survive 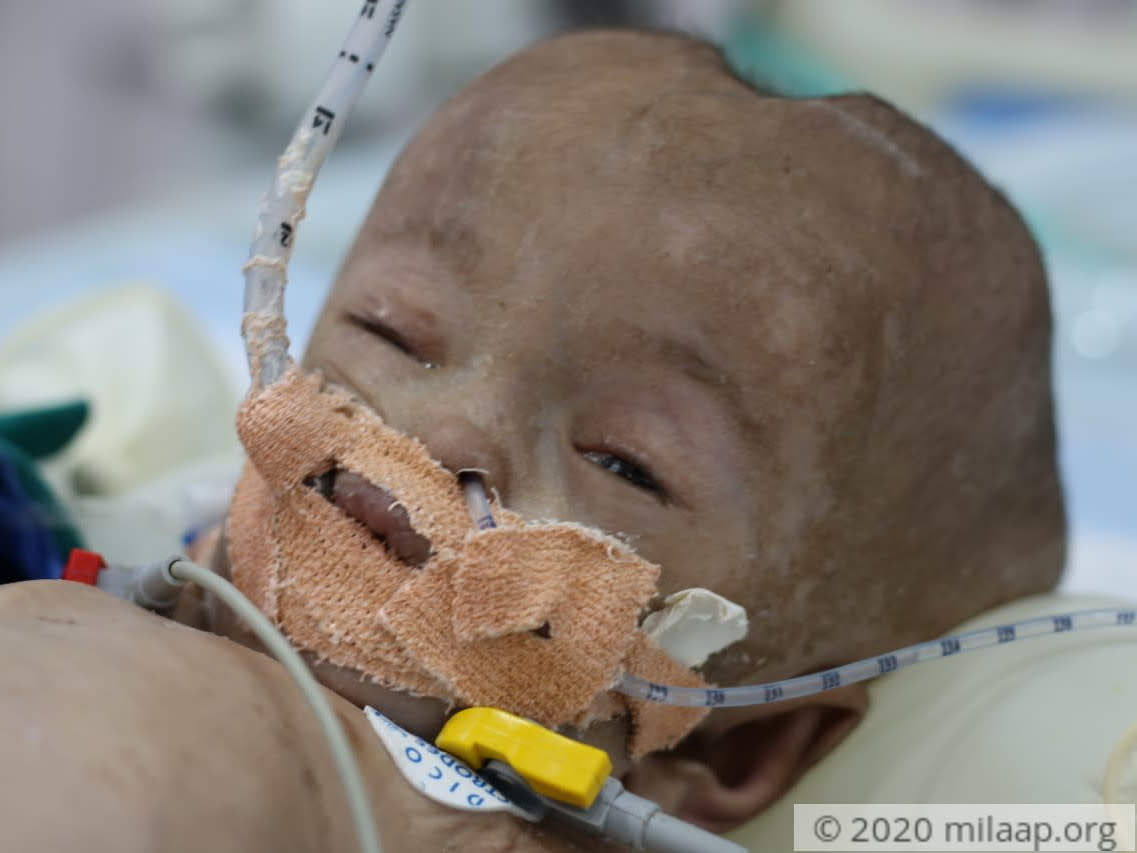 Share
They had warned me that there was something wrong with my baby, some condition in her brain. They said ‘Be prepared, your baby might not look "normal" like other babies.’  But how does one prepare for something like that? When my wife went into labour, I just kept imagining the worst, I didn’t know what to think. And then... they brought my baby out.
Her legs, her arms, her body, they were tiny, but her head... it was huge.  Bulging veins and bumps all over... And yet, as I took her into my arms...
When she looked up at me... She was the most beautiful thing I'd ever seen.
Little Nandini was born to Biplob and Shivani 6 months ago, suffering from a condition called Hydrocephalus. In a normal brain, a fluid called cerebrospinal fluid (CSF) is produced in the center, which then exits through a small pipe at the base to coat the outside of the brain as a protective layer. But in some cases, the pipe gets blocked and leads to a severe buildup of CSF inside the brain. This causes it to swell abnormally with so much pressure that it makes the skull expand too. Through scans, the condition can be detected before the baby is born, as in Nandini’s case, but what exactly causes this birth defect is still unknown. Hence, there’s no way to prevent it.

“Last year, while Shivani was pregnant with Nandini... her mental health started deteriorating. She started forgetting things, being unable to talk properly. She couldn’t even recognize us anymore. We don't know what caused it, and doctors don't either. After the delivery, when Shivani woke up, I took Nandini to her so she could hold her baby but... she asked me who it was! She couldn’t recognize her own daughter! My parents have been taking care of Nandini since then, while I go out to work. I don’t know why all this is happening to my family...”

She had a successful surgery, but developed a life-threatening infection

To ease the extreme pressure building inside her skull, Nandini had to have a shunt-procedure done a few weeks ago, at just 4 months of age. While the surgery was successful and stopped further enlargement of the brain and skull, little Nandini acquired a life-threatening infection in her lungs shortly thereafter. It has left her gasping for breath in the ICU, straining her already-frail body. On top of this, the infection has led to a severe reaction in her body called sepsis, an equally life-threatening condition. She needs to be on ventilator/life-support for weeks to fully recover, but Biplob can't afford the cost.

Biplob is struggling to remain strong on his own, in these circumstances

“I’m a school-bus driver. With the way things are at the moment in the country, I’ve not been able to go to work. And people like me, we don’t have savings... we can’t afford to. For her surgery, I had to borrow money from so many people, and we got some donations from a nearby temple as well. I knew I’d be in debt for years to come, but I was happy because I thought Nandini would live a long and happy life. It’s only been a few weeks since then... and her life is in more danger than ever. I don’t know what to do. I cry, sometimes, and Shivani... She asks me what’s wrong, she doesn’t understand our daughter’s dying. I feel so alone. Please help me...”

Click here to donate, so that Biplob can afford to keep Nandini on life-support until her body is strong enough for him to take her home.
NC
Patient Nandini Chakraborty is 5 months old, living in Kolkata, West Bengal
IO
Being treated in Institute of Child Health, Kolkata, West Bengal