With Every Passing Minute, This Cab Driver’s 5-Year-Old Is Nearing Heart Failure Without A Transplant | Milaap
loans added to your basket
Total : 0
Pay Now

With Every Passing Minute, This Cab Driver’s 5-Year-Old Is Nearing Heart Failure Without A Transplant

“To afford her meals and medicines I have to drive the cab every day. Every call I get frightens me, expecting the worst to happen. I wait for the my duty to get over only to rush home to my daughter. It’s been nearly a month since we have been told that she needs a heart transplant. Instead of undergoing a transplant, she is bedridden at home without treatment all because I'm unable to afford it,” - Somashaker, Nadimgorla Alekhya's father.

Three months ago, Somashaker and his family visited their hometown Gollapalli Village in Chittoor District. Alekhya was having the best time with her grandparents until she fell sick with fever, cough and cold. Even after taking medicines, the illness did not subside. They consulted a local doctor who advised them to take Alekhya to a better hospital in the city as soon as possible. Unaware of what to expect, the family rushed to Bengaluru.


“We admitted our daughter in the hospital and she underwent various tests for nearly three days. We were told that she is suffering from severe heart problem and needs a heart transplant immediately. We used up all the money that we saved for the future of our two daughters and still could afford only 15 days of hospital stay. We discharged our daughter from the hospital despite her critical condition, it was a painful moment but we did not have an option,” - Somashaker.

After 10 days of medication at home, Alekhya was too weak to even move and Somashaker rushed her to the hospital. However, he discharged her within three days again as he couldn’t afford to pay the bills.

Our house was once filled with her laughter, but now there's only silence and sadness

5-year-old Alekhya is a charming little girl. She is an obedient student at school and a naughty child at home. She used to trick her mother with her lovely smile and a pleasing face whenever she wanted to eat maggi, her favourite noodles. But now, she is bedridden with weakness and she barely speaks to anyone.


“My daughter loves holi festival, when she was just three-year-old she started playing with the colours. But during this year’s holi, she was crying with chest pain,” - Gautami, Alekhya's mother.

Somashaker is a cab driver in a private company in Bengaluru. He earns Rs 15,000 a month, with which he pays Rs. 6,000 for rent and feeds the family and also manages to pay his daughter’s school fees with the remaining amount. After the tragedy struck, he not only exhausted all his savings and but also borrowed Rs 70,000 from his friends.  But his child who is suffering from dilated cardiomyopathy, a condition that causes the heart's inability to supply the body with enough blood, needs to undergo heart transplant urgently. But 18 lakhs is above his means.


“With every passing minute death is threatening to take her life and I feel dreadful for my helplessness. The transplant has already been delayed for a long time now and I cannot afford to keep her in the house without any treatment. Please help me save my daughter,” - Somashaker.

Your kind contribution can save Alekhya 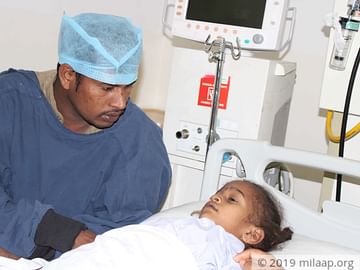 Only an urgent heart transplant can give Alekhya a new life

UPI: givetosomashekharfunds1@yesbankltd (Copy to clipboard)
Or
Click here to read the instructions before you make a bank transfer.