The Treatment That Should've Saved This 2-Year-Old's Life Gave Him Cancer | Milaap
loans added to your basket
Total : 0
Pay Now

“Zayan is our first and only child. The pregnancy had no complications, the delivery had no complications. He was a happy baby, smiled at everyone. Everything was great until ten weeks after he was born, when we noticed that his skin was starting to turn yellow. People told us that it’s normal in babies and not to worry, but we still took him to the doctor. There they ran some blood tests, but found nothing. So then they decided to run some more tests. That’s when we found out that… that my Zayan’s liver was very weak. So weak it could kill him.” – Tasni, mother

It had seemed like the end of the world for the young couple, but they found hope in what the doctors told them next: medicines could heal Zayan's liver. Eight months later, however, not only was there no improvement, his liver had reached acute failure stage. At that point the only way for these desperate parents to keep their only child alive was to get him a liver transplant.

“Trying to save our son's life took everything from us. We sold whatever jewelry we had, anything and everything of value that we had. We borrowed from our family, our friends, from strangers. We did everything we could, and with the help of some kind strangers who donated some money we were finally able to get our son the surgery he needed. In the end, when it was time to take our boy home, it was all worth it. We got our son back after almost losing him forever, and that’s all we cared about.” – Haneef, father

But tragedy has struck this family again.

One month ago, a year after his liver transplant, Zayan’s parents noticed that he was starting to breathe with a lot of difficulty. Each time they took him to a doctor they treated him and sent him back, but soon a small bump started forming on his neck. Upon closer examination, the doctors revealed to the stunned parents that their 2-year-old son has cancer. Unfortunately for little Zayan, his body hadn’t fully accepted the new liver. While it didn’t outright reject the organ, some of the cells in his body had mutated and turned cancerous.

“We couldn’t believe it. He is just two years old. He already fought and won a battle with death once. Now he has to do it again? I don’t understand why this is happening to him, he’s such a sweet little boy. He used to laugh all the time. Now he can barely keep his eyes open, and whenever he does… they’re full of tears.” - Tasni

Zayan was admitted into the ICU as soon as his cancer was diagnosed. Because of his respiratory trouble he requires 24x7 ventilator support, with only minor breaks every few days to see if his breathing improves. He has lost 2 kgs in the past few weeks and it is still going down with each day. The doctors did one emergency chemotherapy session, due to which he has also lost his appetite and vomits whatever he does eat.


“The doctors told us the only way he will live is if he gets at least 5 more chemotherapy sessions. But we just cannot afford it. I'm just a driver, and my wife stays at home to take care of my sick mother. We gave up everything, gave our all for his liver transplant. We have nothing left now, and no one to help us. Every day I try to arrange some money but with each day I see my son get thinner and thinner. If we can’t give him his treatment now, soon he’ll disappear forever.” - Haneef

These parents don’t know what to do. All they know is that they cannot lose their only son, and that too so soon after bringing him back from the brink of death once already. You are their only hope now. Please donate, and save baby Zayan’s life. 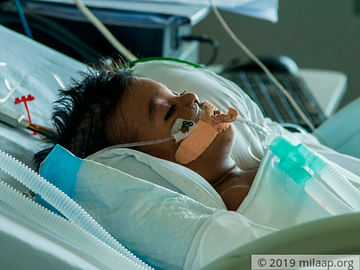 They brought him back from the brink of death once. Now his life is at risk again.