This Could Be The Last Time We See Our 8-Year-Old Alive If We Can’t Afford His Treatment | Milaap
loans added to your basket
Total : 0
Pay Now 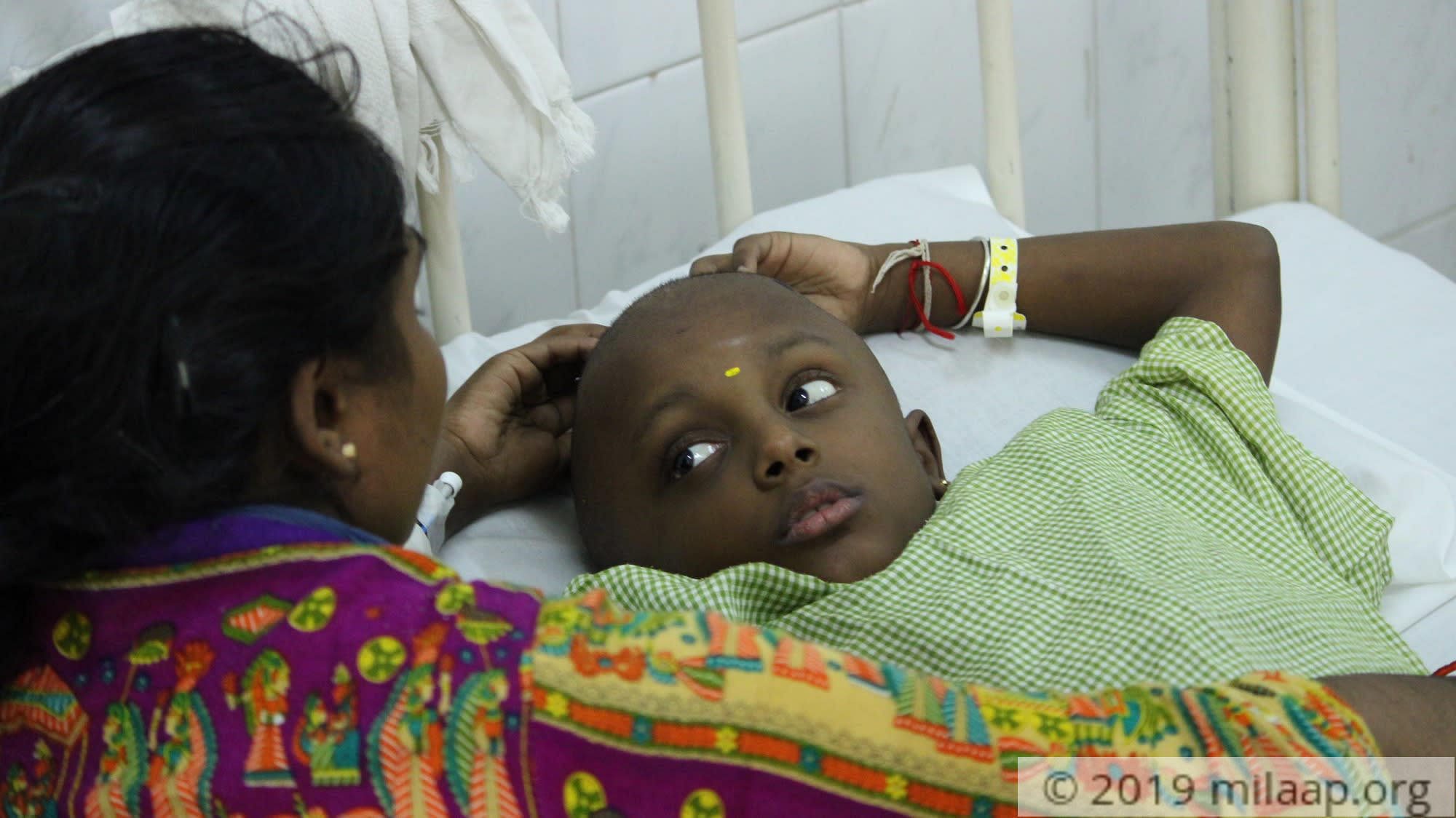 "He was just playing outside with his brother, when Mugilesh got hit in his eye by accident. It was just a small bruise… we never imagined even in our dreams that it would turn out to be deadly cancer. His disease is getting stronger each day and it is trying to take my son from me. We only have a few days left to pay for his surgery and if we fail, it could be the last time I see him." – Radha, Mother

8-year-old Mugilesh was getting ready to start his 4th grade in June. His vacations were coming to an end, and he was spending his last few days of his holidays playing with his brother. After the accident that day, he got a black eye which soon started swelling. His vision got blurred and his parents had to rush him to the hospital overnight.

"Doctors told us not to worry, and that it would heal on its own. We took him home but the next day when he got a fever and became weak, we rushed him back. That's when they took a blood test and discovered that he has blood cancer. I couldn't believe my ears. It was just a small wound, how could it turn out to be cancer?... I prayed for it to be a dream or some error in the blood result." - Radha

Mugilesh is now diagnosed with Acute Myeloid Leukaemia, a rare blood and bone marrow cancer. Cancer interferes with the production of platelets and white and red blood cells, making him weaker and prone to more bruising. He underwent two sessions of painful chemotherapy last month but his cancer has become so aggressive that only a bone marrow transplant can cure him.

"He dislikes the hospital and just wants to go back home. He was so excited to meet all of his friends and start his 4th grade after the holidays. But we had to admit him here on the same day his school re-opened, and now he’s angry with us. It’s been four months now and I'm starting to wonder if he'll ever leave the hospital at all. I know it’s difficult for him to miss his childhood and spend it in a hospital bed but his life is what matters more to me now." - Radha

He needs a bone marrow transplant within a week to survive. Mugilesh’s ten-year-old brother will be his donor and the doctors have advised undergoing the transplant soon to avoid the rapid progress of cancer. Mugilesh is ready and has undergone all tests and treatments that are required, but his parents can't afford it. The longer he waits the lesser is his chance of survival.

My husband is a school-van driver who makes a modest salary of Rs. 10,000 per month. We had to sell all our jewels and borrow money from everyone we knew to pay for the chemotherapy in the beginning. My husband is already neck-deep in debt, and is even on the verge of losing his job as he took more days off to look after our son in the hospital. My little boy has only a few days left and I don’t know how am going to save his life. His life is precious and I dont want him to die.

Please help this little boy who is struggling to fight cancer and live. Without your help and kind contribution his parents cannot pay for his life-saving transplant. 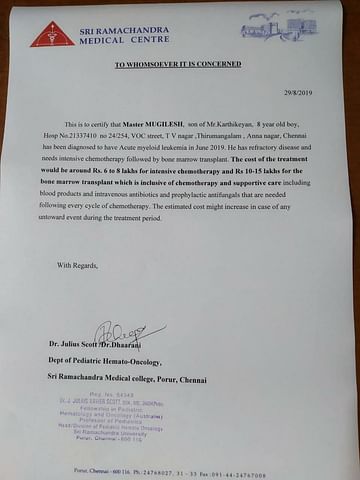 Click here to know more about Mugilesh
Donate now
OR
Click here to read the instructions before you make a bank transfer.

Arun Rs.600,000
213 others have contributed
Click here to know more about Mugilesh

Dear child, hope you will be fully recovered soon. Wishing you all the best. God/Buddha bless you.