Without Help, This Smiling 3-Year-Old's Chance To Fight A Dangerous Disease Is Very Low | Milaap
loans added to your basket
Total : 0
Pay Now

Without Help, This Smiling 3-Year-Old's Chance To Fight A Dangerous Disease Is Very Low

Shares
Shares
Share on whatsapp
By just looking at 3-year-old Nawaz, who seems happy and playful on the outside, it’s hard to digest the fact that he’s been battling a dangerous form of Thalassemia since December 2017 and if he doesn’t get a bone marrow transplant within the next 10 days then he won’t have long to live. Over the past year, his poor parents have taken him to several hospitals around the country and now they’re in need of support to save their son.

“He requires blood transfusions very frequently. On several occasions, we were unable to give him a transfusion on time and his condition worsens so quickly. Just within a few hours, he gets terribly weak, he gets pale and he doesn’t even have the energy to walk, let alone play. He’s repeatedly got high fevers and in a day, he vomits 3-4 times too. He doesn’t eat much. Seriously, the past 18 months have been the hardest of our lives.” – Mohammed Sharif, Nawaz’s father

The 3-year-old’s condition had worsened to such an extent that Mohammed and Nagina, Nawaz’s mother, thought that they’d lose him anytime. Now, his only chance of survival lies in getting an urgent bone marrow transplant.

Nawaz’s parents struggled to find treatment for a year

“I work in Mumbai but Nawaz, my wife and 3 daughters live in a village in Bihar. We’ve been to so many hospitals. We’ve left 2 of our older daughters at home and been away from home for so long. For someone like me, traveling is very expensive. Every day, Nagina can’t stop crying over the possible fate of Nawaz. The past year has been terribly hard for her because she has also got a fracture and had to be treated for that. We spent over Rs. 40,000 on that too. ” – Mohammed

Mohammed Has Absolutely No Money To Save Nawaz

The bone marrow transplant costs around Rs. 15 -17 lakhs. Mohammed, who earns lesser than Rs. 10,000/month by working at a small hotel, he has absolutely nothing left to save Nawaz.

“We’ve spent over Rs. 2 lakhs already and we had to sell whatever little jewelry Nagina had too. We’ve already borrowed Rs. 80,000 from friends, family and no one has anything more to give. How can I afford a transplant when I don’t even have money for a blood transfusion or checkups? It’s difficult for me to pay a rent of Rs. 3500 too because I haven’t been able to go to work for months.” – Mohammed

“I just want to see him play. He was so active, now it’s hard to see him like this – always in the hospital, always undergoing tests. I can’t help but keep feeling that we may lose him. As his mother, I’ve watched him struggle for a year and I just want him to get better.”- Nagina

With no idea on how much more time they’re going to spend in Mumbai, Nawaz’s parents have no money for anything. They don’t even eat properly in order to save money. Nawaz is very anemic and his only hopes to a normal life, and to survive, lie in getting an urgent bone marrow transplant. For Mohammed and Nagina, your support can go a long way and it will give them hopes of saving their 3-year old boy. 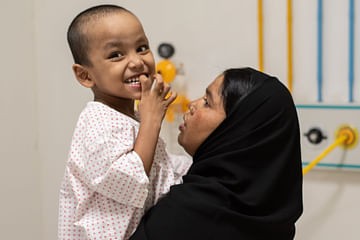 Nawaz Needs Your Help To Get An Urgent Transplant, That's His Only Hope

His parents are struggling to get him treated, you can help them