This 14-year-old Cancer Patient Tries To Run Away From The Hospital To Escape The Pain | Milaap
loans added to your basket
Total : 0
Pay Now

“My wife and I have to hold her when she is getting any injection or chemotherapy. The minute she sees the nurses coming in, she tries to run away. She'd rather die than go through this pain.” - Howlader (Father)

14-year-old Methara knows she has cancer. She is devastated that it took her away from home and reduced her to a person she cannot recognize. Methara is in pain all the time. She says her body is always on fire from the inside. Unable to eat, sleep, or even talk to her favorite person in the world, this little girl feels that death is better than existing in a world of pain. Her father, now unable to continue her treatment, worries that he might end up losing her altogether, despite having struggled to keep her alive so far.

Methara dared to dream to become a doctor despite poverty, now cancer is shattering her dreams

14-year-old Methara dreams of only one thing - she wants to become a doctor who would give free treatment to the elderly like her grandmother. Methara was brought up by her ‘daadi'  (father’s mother) and is very close to her. She is losing hope because she is not able to talk or be with her 'daadi'.

“Recently, my mother suffered from a cerebral stroke and has not recovered yet. We are struggling to pay for her treatment as well. Methara misses her a lot but we can’t even afford to make a single call.”

‘Every time they delayed treatment, her condition worsened'

Methara has Acute Lymphoblastic Leukemia. It is a type of cancer of the blood and the bone marrow that affects her white blood cells. Methara’s immune system is very weak and she is always running the risk of getting fatal infections. Her condition deteriorates every time they delay treatment. She now has unbearable pain in her chest and legs, so much that she stays up all night curled up, screaming and vomiting. She is very weak and weighs only 38 kgs as she is unable to eat or hold down the food.

"The time it took us to come to Kolkata. The delay to start chemotherapy, first cycle and second cycle. All this has just made her worse. This cancer spreads fast. So we cannot lose more time."

‘Don’t show me the mirror, I know I look ugly’

Losing hair is traumatic for any cancer patient, especially children. It reinforces the fear of losing life, and often leads to loss of hope, which impacts survival. So, when Methara began experiencing the side-effects of chemotherapy, the medical team took the decision to shave her head.

“She is angry with us for letting the nurse shave her long hair. Now, she asks us not to show her the mirror because she feels she looks ugly. She thinks we are punishing her by giving all this pain.” - Husnehara, mother.

4 months ago Howlader and Husnehara got to know about their only daughter’s blood cancer. She was taking medicines but her condition did not improve. 2 months ago they brought her to Tata Medical Centre, Kolkata. Since then, the parents have been collecting every rupee for their daughter's treatment.

“I am a salesman at a bike showroom in Khulna but I haven’t been able to go to work in the longest time. I have already spent more than 6 lakhs - not just mine, my brother’s savings were also used up in this. I need 8 lakhs more and now my only hope is begging to strangers on the road for help.”

Methara can beat this. She can go home to her daadi. She does not have to be in pain. Your contribution can help her parents pull her out of this nightmare. 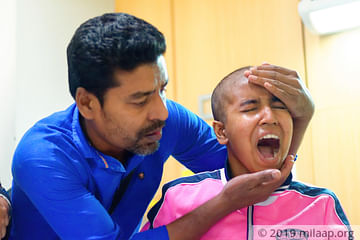 Methara Hates That Her Hair Has Been Shaved Off