Youngster Who Quit His Studies To Care For Brother With Cancer Now Struggles To Save Him | Milaap
loans added to your basket
Total : 0
Pay Now

“My elder brother Danish has always been my role model. It was his biggest wish that I become an engineer and make him proud. But now, he is battling cancer and I had to quit my studies recently to take care of him. I don’t regret it as my brother’s life is most important to me but we don’t have the funds to save him,”-Anis, brother of Mohammed Danish.

Danish is suffering from relapsed blood cancer and needs a bone marrow transplant to recover. Chemotherapy has weakened his body but he is trying to be mentally strong in the face of this adversity. Even when he is going through unimaginable pain, he tells his brother Anis that everything will be alright and asks him to be strong. Anis wants to do everything in his capacity to save his brother and afford his urgent transplant, but his family's poor finances will never let him do so.

Danish was first diagnosed with blood cancer two years ago, when he had landed a job as an accountant in his hometown of Benares, UP. His father had just quit working as a carpenter due to high blood pressure issues, making Danish the sole breadwinner of the family. But fortunately for Danish, doctors assured him that his cancer could be controlled with medicines. After 2 years, he was recently declared cancer-free and even got engaged in March. But sadly, cancer came for him again – this time deadlier than ever.

“He was so happy. He was looking forward to getting married and starting a new chapter in life. We hadn’t seen this coming – now his condition is so bad that the wedding had to be called off. He doesn’t deserve this,”-Anis

Danish and Anis’ parents Maqbool and Mehjabeen do not know the severity of their son’s cancer relapse. Nobody had the heart to tell them the truth. They still think that the cancer is under control and will go away with medicines.

“They will die of sadness if they come to know that he is very critical and can even die without a bone marrow transplant. They are praying and waiting for him to get better with medicines. I hate hiding things from my parents but I have no other way,”-Anis

Despite borrowing heavily from his college mates, Anis is struggling to save his brother

Anis was pursuing his final year of engineering when his brother was admitted in the hospital for cancer relapse. He had to quit his studies immediately as his aged father and mother couldn’t manage hospital admission and other formalities by themselves. As there was no income anymore, he had to borrow more than a lakh from his college mates to kickstart his brother’s treatment. But now, he does not have anybody else to ask for help and is struggling to arrange funds.


“We haven’t told our relatives about the relapse as even our parents don’t know. We don’t want them to call our parents and alarm them. I am trying to manage everything on my own for now, suppressing all my sadness and anguish. I need urgent help to save my brother now,”-Anis

With your kind help, Anis can save his brother before it is too late 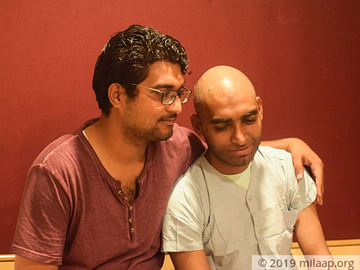 Anis is struggling all by himself to save his elder brother from deadly cancer. Please support.