Despite Driving His Bullock Cart Day And Night, This Father Can't Afford To Save His Only Child | Milaap
loans added to your basket
Total : 0
Pay Now

Despite Driving His Bullock Cart Day And Night, This Father Can't Afford To Save His Only Child 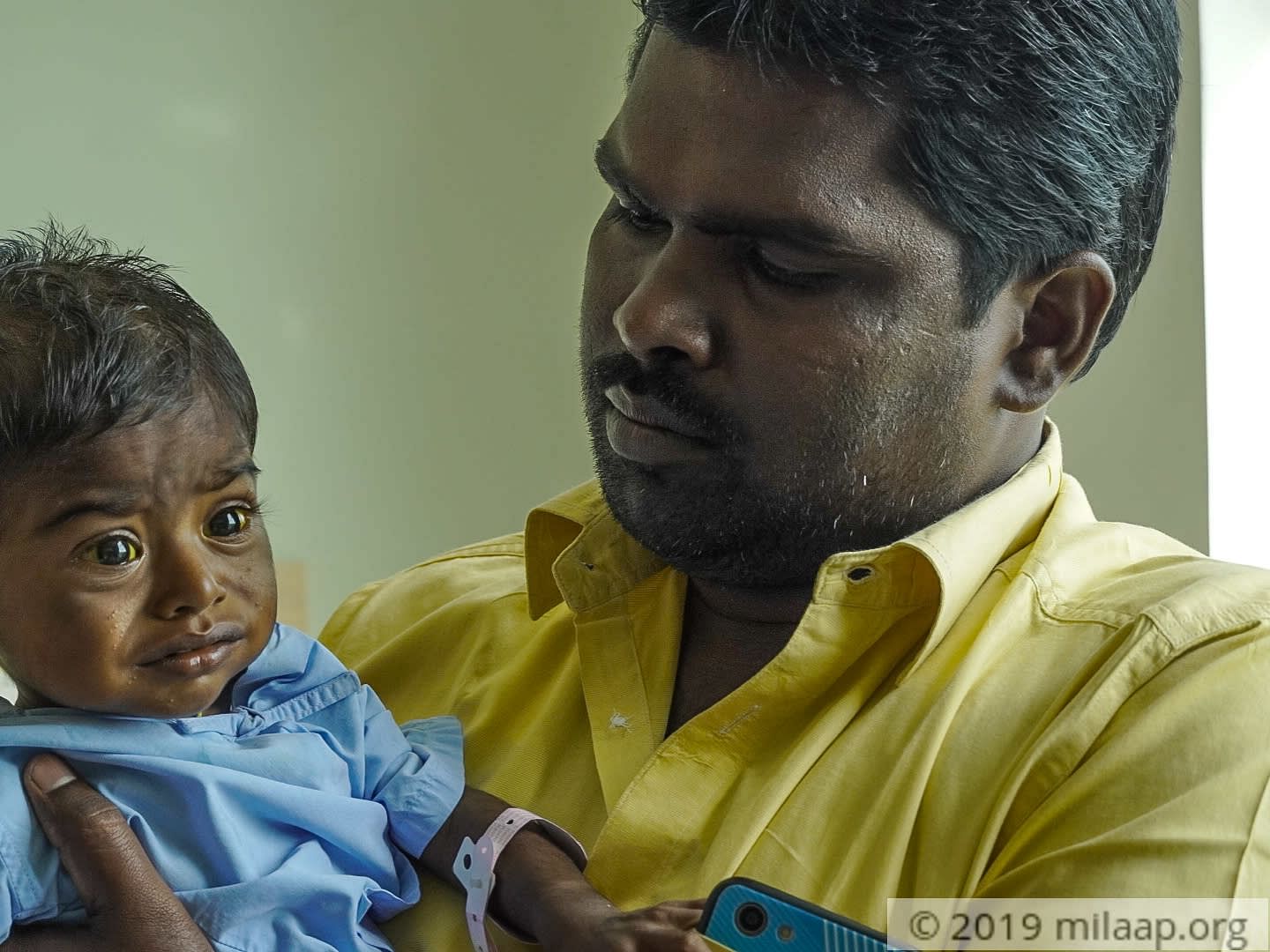 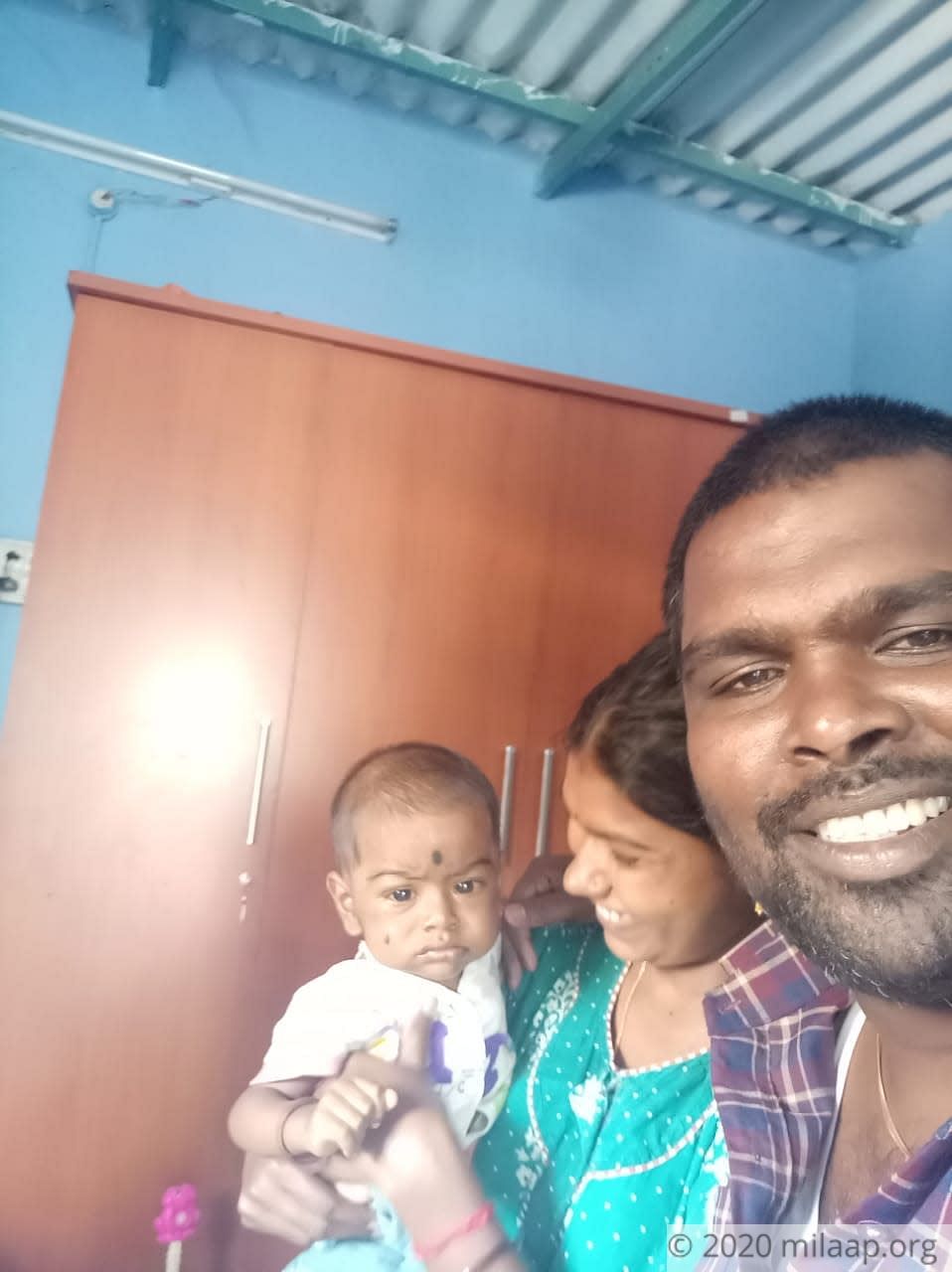 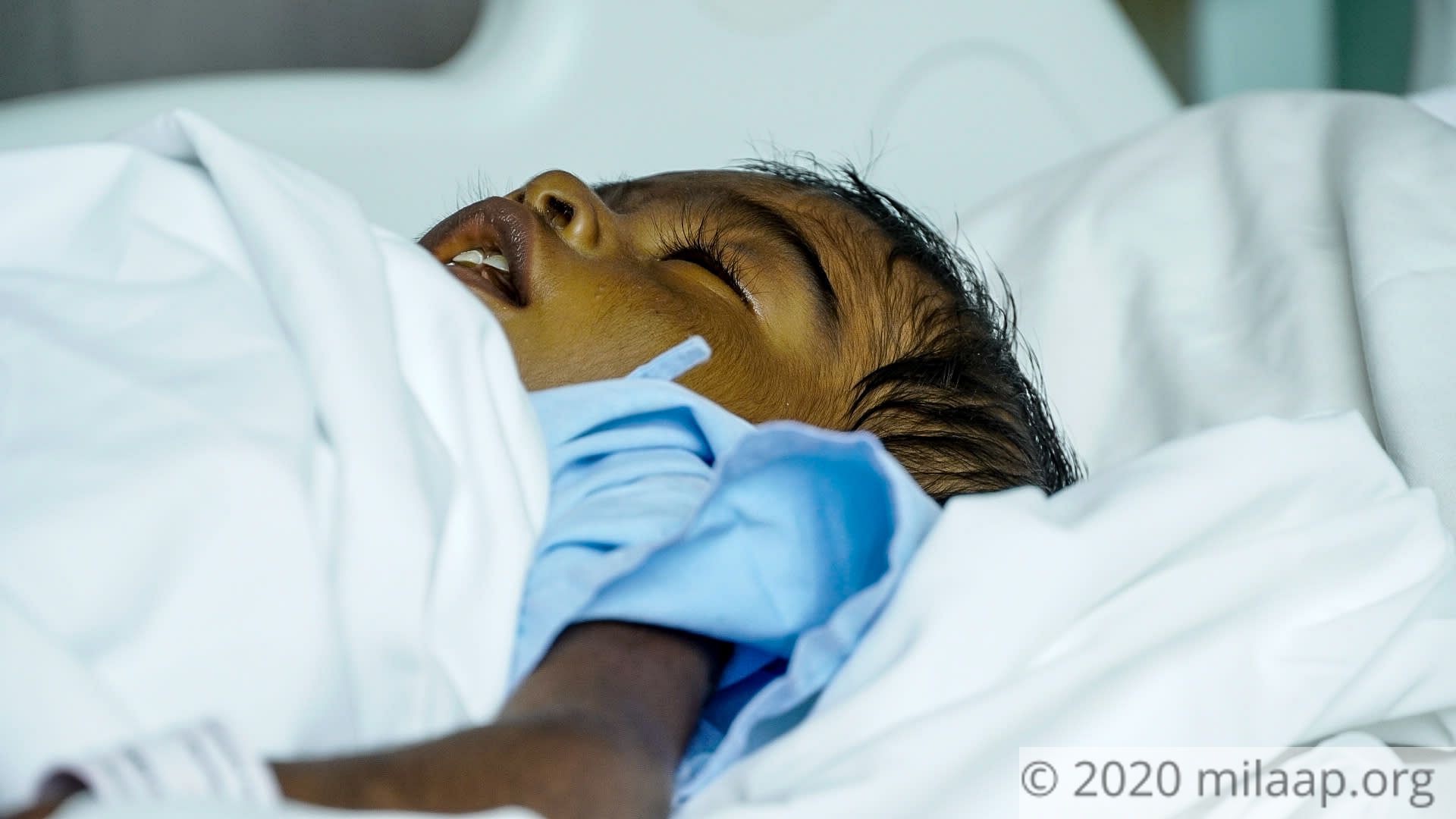 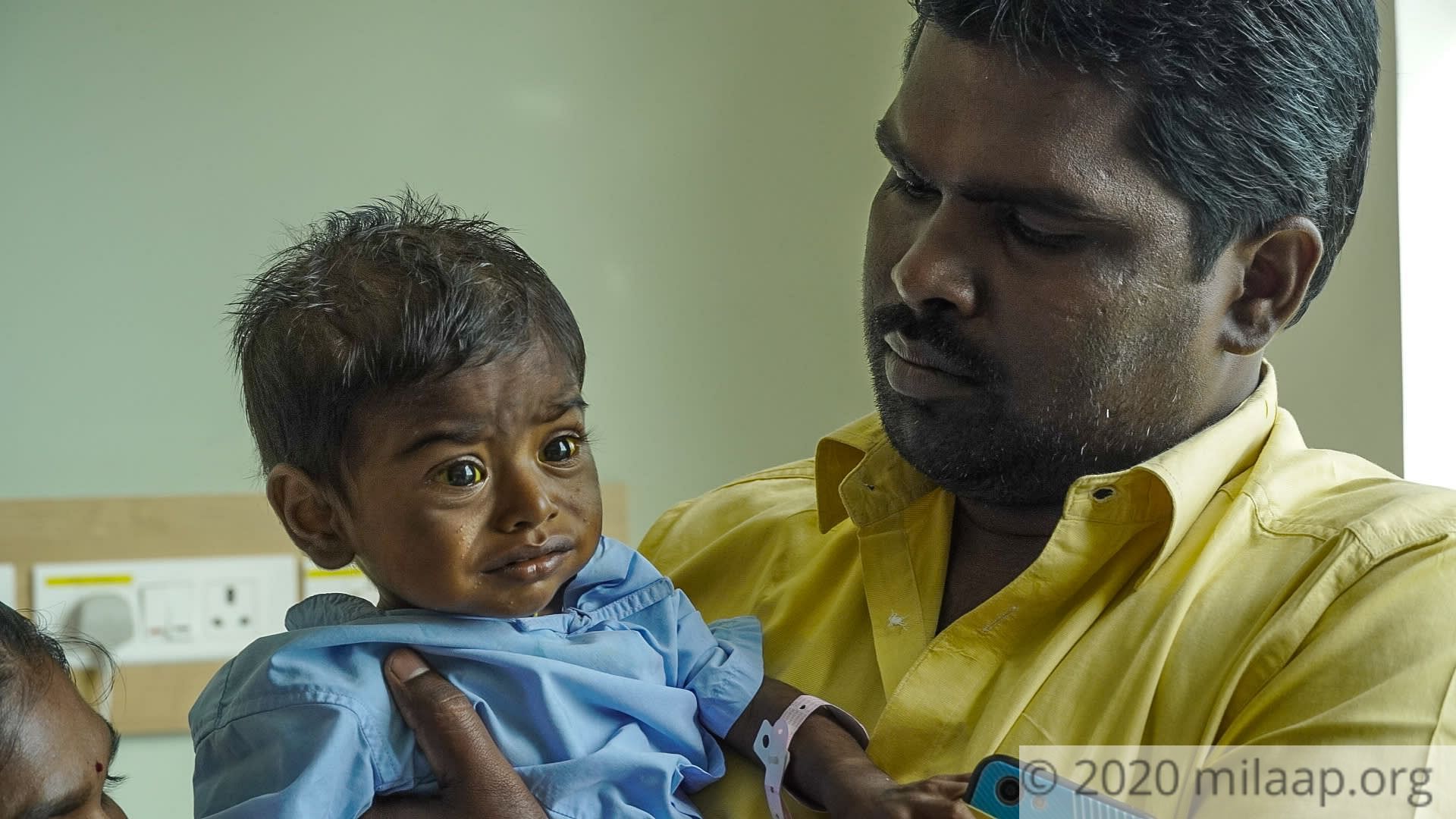 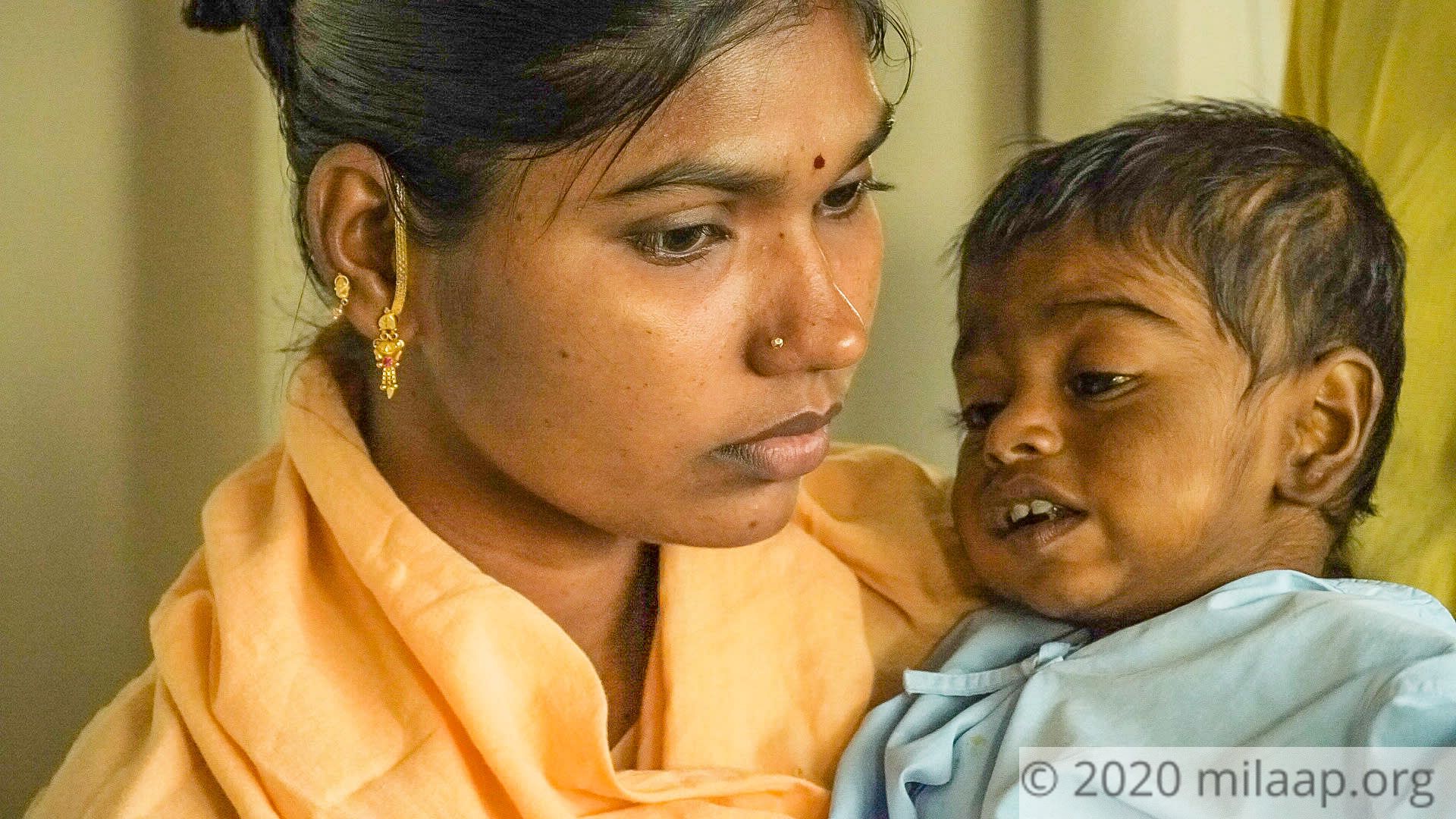 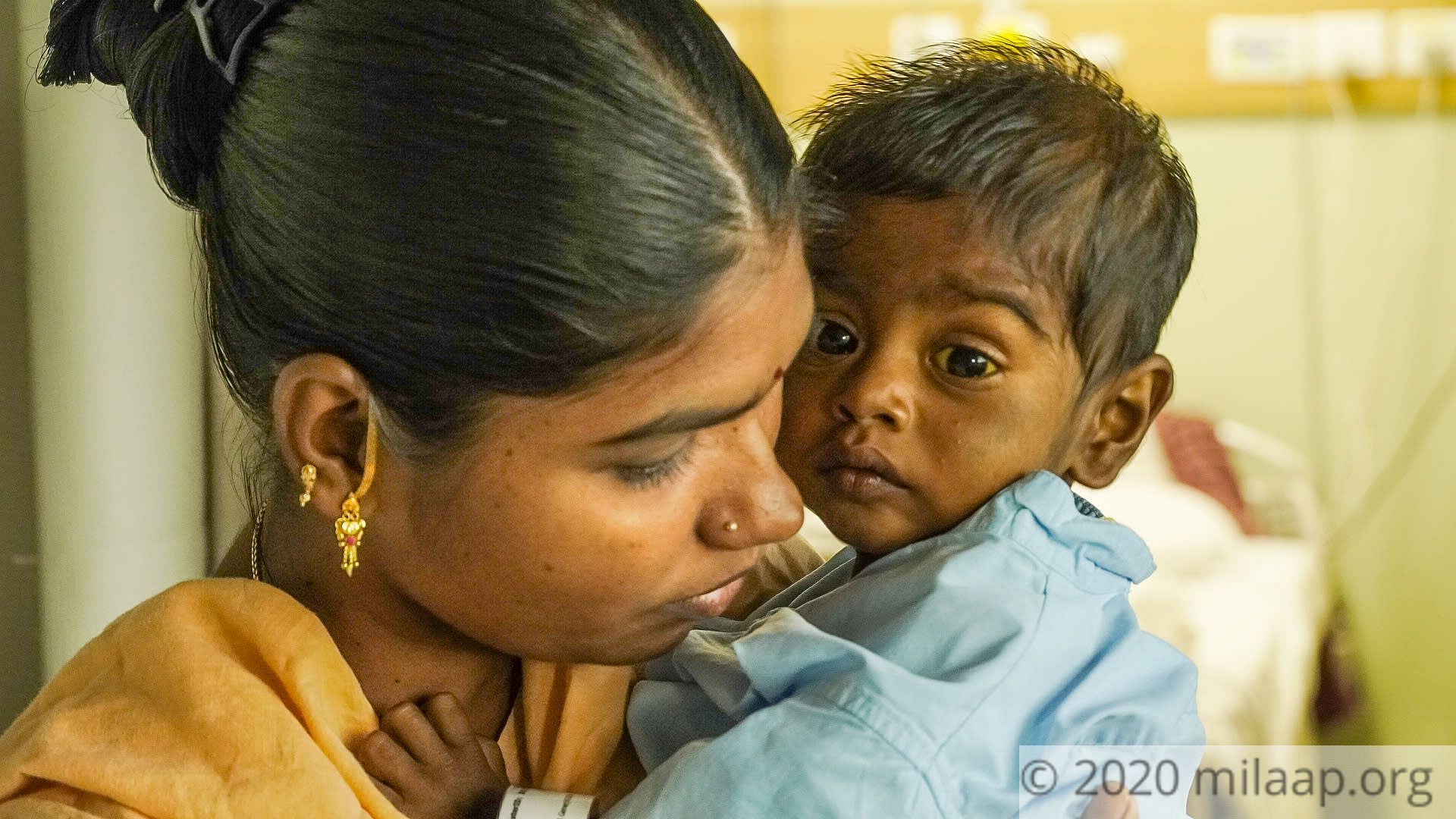 “There are times when he smiles and gets excited and rolls over face-down, like babies do. But the next second, his smile is gone. He winces, and shrieks in pain and flips back again. With his swollen stomach, he’s denied even this simple joy of rolling over!” – Saravanan, father

Saravanan and Vanitha spent their lives aching for a child. After each of their hospital visits, they came home more hopeless and crushed than before. There was no hospital they hadn’t visited; no treatment they hadn’t tried. They went to every temple near and far, in vain. Just when they were about to give up, after 6 long years, Vanitha was told she was going to be a mother. They were blessed with a baby boy. Their joy knew no bounds, but it was short-lived. At 1, their little boy is now fighting for life.

Can a 3-month-old survive an operation this big?

“He was doing fine but one day, we noticed his eyes were pale yellow. We did not worry much for it was very mild. But then, his stomach started bloating. He winced every time we even touched his stomach. We rushed him from hospital to hospital, and nobody could tell us what it was. Finally, we got to know his liver was in poor shape and that he needed an operation that would cost 20 lakhs. Money was a concern. But more than that, we were scared. Can a 3-month-old survive an operation as major as that? We took him back home without getting him operated.” – Saravanan, father.

“Many doctors we visited told us he won’t survive. Angry with life, we decided to keep him with us, without even a prick on his skin, for as long as he lived” – Vanitha.

Later, little Guru was administered herbal medication that the parents could afford. While the medication promised recovery, Guru wasn’t receiving the supportive care he required. Months passed and his stomach only got bigger. Soon, when they realized the medicines weren’t helping, they rushed him to a hospital, where their worst nightmare came true.

Little Guru has been diagnosed with end-stage liver disease

Guru’s sickness had been nearly asymptomatic until later. When he was examined, the results revealed he was fighting end-stage liver disease. He was diagnosed with Decompensated Cirrhosis. It involves severe scarring of the liver and is defined by the existence of Jaundice and Ascites – Swelling of the stomach due to fluid build-up. Left without treatment, Guru can't survive.

“Maybe if he had been born in an educated family, they would have caught the disease earlier. He wouldn't be suffering this way!” – Vanitha.

With an urgent liver transplant, he can still be saved

His condition worsens each day, and a liver transplant is his only hope for survival. Currently, Guru is admitted in a hospital in Kochi, far away from home. He’s receiving treatment, to prepare his body for the transplant, while his father is struggling to gather funds for the surgery. The surgery, along with the supportive care, costs 15 lakhs, and the parents are helpless.

"He can't roll over, neither can he sit. His legs are too weak and won't let him stand. His stomach hurts all the time. All he's seen in life till now, is pain!" - Saravanan.

Saravanan drives a bullock cart for a living. He transports goods to construction sites, and earns not more than Rs. 85-90 per day. While his family is in Kochi, preparing for Guru’s treatment, Saravanan is in his hometown, toiling. Every few weeks, he rushes all the way to Kochi to give his family the money he has earned over the days. Despite all his efforts, they are still very far from gathering the required amount.

“I can’t sleep at night! It feels miserable. So, I start work earlier than I used to, before. I take out my cart at 3 in the morning and take up as much work as possible through the day. But it’s difficult to make even a few thousands and I feel helpless. He’s our only son – a blessing born after years of prayers. Please help me save him!” – Saravanan.

Little Guru is denied even the simple joy of rolling over. At 1, he still can't sit. He's led a life of pain all this while. Your generous contribution can help him lead a normal life. 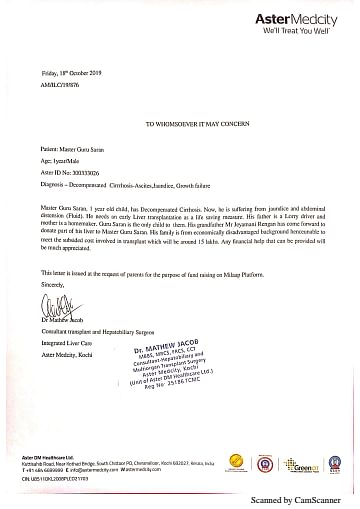 Click here to know more about Master Guru Saran
Donate now
OR
Click here to read the instructions before you make a bank transfer.