My 6-Year-Old Is Battling Two Rare Diseases, Either Of Them Can Kill Him | Milaap
loans added to your basket
Total : 0
Pay Now

My 6-Year-Old Is Battling Two Rare Diseases, Either Of Them Can Kill Him

Shares
Shares
Share on whatsapp
My baby Faizy was just 3 months old when he got his first fever. I remember how scared I was as my husband and I rushed him to the doctor. Mubarak, my husband, kept telling me everything would be okay, and so did the doctors once we reached the hospital. But I couldn’t stop feeling afraid, and when the doctors came to us and said they needed to run some tests, I knew something was very wrong.

We went back the next day to collect the results and it was there that we found out that my son has a severe and life-threatening blood disease. The doctor revealed to us that the disease was genetic. My heart just sank at that point and I remember closing my eyes. Not just because it meant that we were the ones who gave our son the disease, but because I was pregnant at the time… we must have given the baby growing in my womb the disease as well.


We went to bed hungry so many times.

Our life has never been the same after that day. Faizy had to be immediately put on blood-transfusion treatments, needing one every three weeks to stay healthy. It killed me every time, seeing him hooked up to those machines like that when he was just a baby, his blood coming in and out of his fragile body through those tubes. And it was very expensive; we were barely surviving month to month.

After Mehreen, my beautiful baby daughter, was born our expenses doubled. Mubarak started doing double shifts whenever he could, while I stayed with the children at the hospital. But a driver’s job isn’t consistent - we didn't even realise when skipping meals became normal for us.

Somehow we still managed. Despite all our difficulties, we fought as hard as we can and kept our children alive. Faizy is 6 now, and Mehreen 5. They live an almost-normal life between the blood transfusions and their daily medication. They both love school and have so many friends. They love playing around too, we just have to keep them from overtiring them, otherwise they collapse.

But one month ago my precious Faizy started getting extremely sick.

He woke up with a fever one day and within a day or two his entire body started to hurt. He also started vomiting and having diarrhoea. When we took him to the hospital, they told us he had H1N1 – Swine Flu. They immediately admitted him into the ICU, where he remains to this day. Two weeks ago he was put on ventilator support because his lungs couldn’t support his body anymore. The doctors explained to us that H1N1 strikes significantly harder in those who already have the blood disease that Faizy has. After a 6 year fight, my precious son is near death, and I feel like I’m cursed to lose him.

He can still be saved. If he stays in the ICU for just 3 more weeks, he can come home to us and my family will be complete again. But the cost is far beyond even our imagination. We have no savings, and we’ve already tried borrowing money. We will never be able to afford the cost to keep him alive. But maybe you can help. Please consider donating however much you can. I can’t bear the thought of losing my little Faizy. Every little bit will help.

Help me bring my Faizy home. 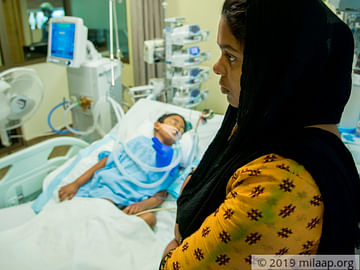 Now he has another disease, and he may not have long to live