Poor Parents Struggle To Save 4-Year-Old Whose Heart Can Fail Any Moment | Milaap
loans added to your basket
Total : 0
Pay Now

Shares
Shares
Share on whatsapp
Evenings are 4-year-old Manshu’s favorite time of the day. That’s when the neighborhood children come back from school and play in the ground near his house, and he does not waste any time joining them. But just 5 minutes into running fast, Manshu collapses. His feet hurt very badly and he runs out of breath. His mother, Surekha, has to come and carry him back home. He then proceeds to spend the rest of the day resting as he becomes completely weak. He can feel his heart pounding in his chest when he keeps his palm over it, and it scares him.


“He asks me ‘Why do I get tired like this when I run? Why can’t I be active like others? I tell him that everything will be alright, but I know very well that his heart condition will keep getting worse without an urgent surgery. But we don’t have the means for it, and we are struggling to save him,”-Surekha, mother.

Despite undergoing one surgery, Manshu is still critical

Little Manshu is the only child of Parvesh and Surekha. When he turned 2 his parents noticed that their child was not growing well – he looked thin and weak despite eating nutritious food. They took him to a doctor thinking that he will prescribe medicines, but instead they got the shock of their lives when their son was found to have a hole in his heart. This was contributing to his poor health and lower levels of oxygen in his body.

“Doctors advised surgery at the earliest but we didn’t have the funds for it and it got delayed. But due to God’s grace, an NGO helped us and he got the surgery last year. We thought he would be fine after that, but he just got worse. Now the hole has become bigger and without another surgery, his heart may fail,”-Parvesh, father.

‘When will I be able to go to school?’

All the children in their neighborhood go to school, except Manshu. When the children come to his house, they talk about their day at school and discuss whatever they learned that day. Manshu always listens to them keenly and listens in awe as they narrate funny incidents. He keeps a smiling face throughout, but as soon as they leave, he starts crying.

“He had believed all along that he would start going to school this year like his friends, but we couldn’t enroll him as doctors had advised against it. Now he keeps asking us when he will be able to go. We lie, saying next year, but we fear that something bad will happen to him before he gets to do so,”-Parvesh

Parvesh works as a peon-cum-domestic help in a chartered accountant’s office in Delhi, earning Rs 7,500 per month. His wife and child stay in their ancestral home in Allahabad as he can’t afford to bring them to Delhi. He spends very little on his food and rent, and sends the rest of the money back home as he is the sole breadwinner. The money would be just enough to cover household expenses, and there would be nothing left to save. Now, Parvesh needs close to Rs 3 lakhs for his son’s surgery and he is struggling to arrange it.

“I have never even seen such a big amount in my life. I don’t have anyone to ask as my relatives are poorer than me. Please help me before it is too late,”-Parvesh

With your kind help, this father can save his son and give him the life he deserves 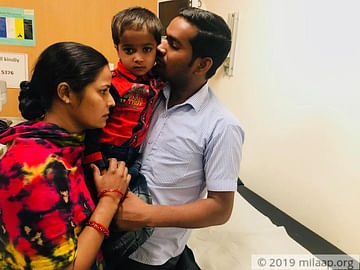 Despite undergoing a surgery in the past, this little boy is still critical and needs help

UPI: rzpy.givetomlpmanshuya002@hdfcbank (Copy to clipboard)
Or
Click here to read the instructions before you make a bank transfer.