Boy Who Worked On The Weekends To Support His Education Is Now Fighting Deadly Cancer | Milaap
loans added to your basket
Total : 0
Pay Now

Shares
Shares
Share on whatsapp
What makes Manju’s story so heartbreaking is the kind of person he is – if anyone needed anything, Manju would be the first person to help. Whether it’s his friends in school or neighbours. He’s responsible and hardworking – this is exactly why he offered to help his parents on other’s farms when he found out they didn’t have money to even send him to school this year. Unfortunately, now when Manju needs help to fight cancer, no one he knows can help him.


“Manju studies in an English medium school. That’s a big deal for poor farmers like us. But this year we haven’t earned much and Manju decided to start working to help out. Now when he needs us the most, we can do nothing for him.” – Satyavva, mother

In just 15 days, they spent everything they had

It’s been 15 days since Manju has started chemotherapy for bone cancer. His right leg is swollen, somedays he vomits a lot, can’t breathe and needs help to even sit up. In these 15 days, Basappa and Satyavva have spent everything they had borrowed from neighbours and money lenders.


“It was just one month ago when he came home limping. His right leg was hurt, he said it was while playing. But the swelling only increased with each day. These past two weeks have felt like a lifetime, I can’t remember the last time we ate one full plate of food.”

Manju needs continued chemotherapy and a surgery to fight cancer, but at this point, Satyavva and her husband, Basappa have absolutely nothing left with them.

A poor family of farmer’s Satyavva and Basappa tried to do their best for their children. Their older son is now working as a daily wager in their village in Karnataka, while trying to get admitted to college. They have rented a small room near the hospital in Bangalore. The owner of the room sometimes buys them food, he has even got Basappa a cleaner’s job in a small shop. But how can they afford 14 lakhs while earning Rs. 100 a day?

Manju wants to fight cancer, will you help him?

Manju’s voice doesn’t shake or quiver when you ask him how he is. He says he is fine, and that he will go back and finish school. That’s how young and mature he is. Manju is confident he will fight cancer, but his parents worry that they will lose him. All because of their poverty.

“This is all I’ve said to anyone that has called us – we are very poor, please help us. We worked hard only so that we could educate our children. Nothing is in our hands now.”

Your support will save Manju. 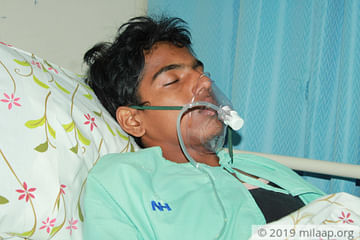 Manju needs chemotherapy and surgery to fight cancer. You can help him.