This 7-Year-Old Dropped Out Of School Because She's Fighting A Scary Hole In The Heart | Milaap
loans added to your basket
Total : 0
Pay Now

k
You are sending a message to
kumari
Go back

"We are poor people. We don't understand much about diseases and hospitals. I just know that my baby is really sick, and as a father, I have to do everything in my power to make her better. The thought of her not being in our life is killing us," said Mamatha's father, Madhav Deshmukh.

7-year-old Mamatha should be in school but she was forced to drop out because of a hole in her heart. Her parents are lost in helplessness trying not to lose her to this defect and they are unable to fund a surgery that can save her life.
Mamatha reading her school textbook

My baby had to drop out of the school

Mamatha's father, Madhav Deshmukh recently lost his father, and on his mother's insistence, took his family to his hometown. Since his mother wasn't doing well alone, they decided that Lata, Madhav's wife, would stay back and Madhav would find a job in Hyderabad. But the day before he was to leave, he took his daughter for a checkup to a family doctor in his hometown in Andhra Pradesh as she had been sick for some time.

At the clinic, the doctor realised that the problem was bigger than it looked. It wasn't just occasional fever and weakness that his daughter had. Mamatha was battling a life-threatening condition. Mamatha had a hole in her heart, and the only way to save her was an open heart surgery. The diagnosis crushed Madhav's meticulous plans. He is filled with regret that he didn't take his baby to a proper clinic before she got sick.

"The diagnosis that my baby has a hole in heart came only 20 days back, but she has been suffering for a long time. We took her out of school because she used to turn blue and have difficulty in breathing all of a sudden. Now, she is extremely weak, and most days can hardly get out of  bed", said Madhav.

Open heart surgery is the only way to save Mamatha

Mamtha is suffering from a heart condition known as tetralogy of fallot.  This defect causes oxygen-poor blood to flow out of the heart and into the rest of the body. An open heart surgery will completely cure Mamatha - she is past the age where medicines could reverse the damage done.

"She has been sick for quite some time now, but even then I never thought something this serious would be the cause of it. I blame myself for being so reckless with my daughter's health. If I had the resources to take my baby to some bigger hospital from the start, things would never have come to this", explains Madhav.

Madhav and Lata work in a furniture shop and make Rs 9,000 per month. They have a younger son, who recently started school. Given their income, the couple is finding it difficult to look after their children.

The estimated cost of Mamatha's open heart surgery is Rs 3 lakhs and her parents are finding it difficult to even buy Mamatha's medicines. They have managed to borrow a few thousand rupees from their friends and relatives for now. But that will not last very long.

Mamtha is barely 7-year-old and has an entire life in front of her. Due to her heart condition, she has been forced to dropout of school and visit hospitals every other day to survive. She needs help fighting for her life. Funds raised through this fundraiser will go towards her treatment. 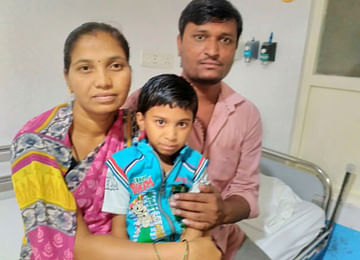 For the last two years, this little one has had heart disease and now urgently needs heart surgery.