Irfan Doesn’t Remember His Own Name Due To Violent Seizures, It Can Leave Him In A Coma | Milaap
loans added to your basket
Total : 0
Pay Now

Irfan Doesn’t Remember His Own Name Due To Violent Seizures, It Can Leave Him In A Coma

Shares
Shares
Share on whatsapp
Every time Mastan Vali and Ayesha see their 12-year-old son Maksood Irfan in the ICU, he's different. That's every 2 hours. They never know if he will remember them or his younger sister, sometimes, he doesn't remember his own name.

"Two days ago I asked him where his papa and mumma are, he stared at us blankly and after a few minutes, he said they are not here. We were standing right in front of him. Ayesha and I tried to stay strong in front of him, but now we only cry. Imagine your own child forgetting who you are." - Mastan Vali, Father

We all have had that one classmate who excelled in everything they did - whether it was sports or academics. Irfan is that child in his class. Favourite among his peers and teachers, Irfan is their go-to person. But now Irfan has been in the ICU for 10 days because of violent seizures and persistent high fever.


"He had his first seizure earlier this month. It looked like he was possessed...his eyes rolled up, his hands and legs shaking violently."

Irfan has been slipping in and out of consciousness since then. He gets seizures every 12 hours.

A helpless father, a mother in shock and piling medical bills

Irfan needs to stay in the hospital for 2 more weeks. He can make it with your help. Else, he risks slipping into a coma, or worse, death. Mastan borrowed from his employer, neighbours and relatives to start his son's treatment. He's a driver in a small town in Andhra Pradesh and earns Rs. 8,000 per month.

"The first two hospitals we took him to told us he might never wake up. But 12 long hours later, he opened his eyes again. Luckily now we're in a hospital that is doing everything they can to make him better. It's me who is failing him... but I've done my best. I arranged for 5 lakhs, I can't afford more."

Unfortunately, Mastan and Ayesha can't keep him in the hospital any longer without your help. This is their only chance to save their son. Irfan needs you. 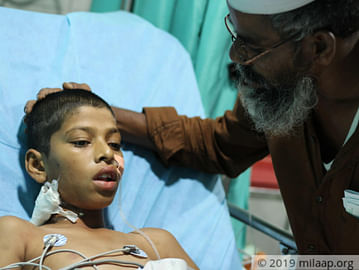 Irfan needs to stay in the hospital longer to survive. He needs your help.