Madhavi's Baby Is In a Critical Condition On Life Support, And He Needs Your Help | Milaap
loans added to your basket
Total : 0
Pay Now

Madhavi's Baby Is In a Critical Condition On Life Support, And He Needs Your Help

Shares
Shares
Share on whatsapp
Life is hell for parents whose child is dealing with a life-threatening illness. Misfortune stuck Prasad and Madhavi when their 6-month-old baby when he developed a high fever and started having seizures. Their son has a rare brain condition where his body attacks his brain causing inflammation. Luckily the condition is curable, all he needs is critical treatment and intensive observation.

The baby before he became sick

Prasad and Madhavi are from a small village in Nellore district, Andhra Pradesh. Prasad works in administration for a meager salary in a government office. With his insignificant income, he manages the expenses of his wife, child and aged parents.

When the baby started having seizures, they rushed him to a hospital in Atmakuri, the closest good hospital from their village. The doctors there asked him to go to a super specialty hospital in Nellore. But when they got there, realising the severity of the case, the baby was sent to Kanchi Kamakoti CHILD Trust Hospital in Chennai. That’s where he’s being currently treated.

The baby has regular seizure and vomiting. He is always running a fever and his condition has also seriously altered his eyesight. He can look only in one direction now. It’s disheartening to see the baby suffer from so pain discomfort and pain at such an age.


He has been in the hospital for over 50 days now and so far he has been in and out of the ICU because his condition is unstable. The illness has affected his breathing because of which he often needs a ventillator. The only thing that can save the baby is treatment with high-dose medicines.

The treatment is extremely expensive and has exhausted all the savings that Prasad had. Despite borrowing money from his friends and family, he has nothing left with which to continue the baby's treatment. In just one month, he has already spent Rs 5.5 lakhs and now his resources have almost run out. He also took a long leave of absence from work to take care of his son during the treatment and is losing his pay for the month.


Prasad and Madhavi have a 2.5-year-old daughter too. Both their children are young and they have to shift between taking care of them both. Without an income, even the smallest expense is draining them of any hope of saving their baby.

Almost choking on his tears, Prasad talks about how hard it is to struggle for their baby they haven’t even named yet. The only silver lining is that the condition is completely curable with the right treatment. Prasad’s financial status shouldn’t be the deciding factor for whether his baby can live or not.

Let’s help Prasad and Madhavi raise the funds needed for their baby’s treatment. 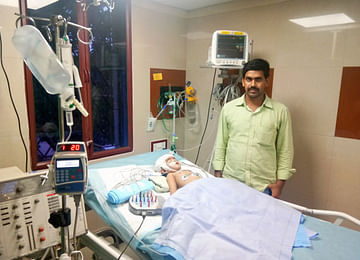 Save Madhavi's baby who needs life support to survive