This Maid Has No Choice But To Take Her Sick Son To Work, She Can’t Afford His Treatment | Milaap
loans added to your basket
Total : 0
Pay Now

This Maid Has No Choice But To Take Her Sick Son To Work, She Can’t Afford His Treatment

Shares
Shares
Share on whatsapp
5-year-old Madan doesn’t go to school anymore. These days, at 10 am every day, Ratna carries him to the house that she works at. Madan quietly watches as she works. There’s nothing else he has the energy to do. Ratna is a domestic help who has been desperately trying to get more work, but she can’t leave Madan alone either. He is very, very sick.

“He has a very rare disease and it’s killing him. My husband and I are trying to do our best to work more so that we can afford the transplant that can save his life. But even after all this time, we are nowhere close. Now I can’t leave him alone for even a minute. I take him wherever I go…anything can happen to him.” – Ratna, mother

Madan has activated protein kinase delta syndrome, a disease that impairs the immune system. Children with this disease have recurrent infections that can be fatal. Madan was diagnosed in May this year and the only cure for this is a bone marrow transplant.

They thought it was cancer

For over a year now, Madan has been in and out of the hospital. Sometimes admitted for 2 days, sometimes for 15. One day it’s a fever, the next a cough and one another day severely swollen arms and legs. The symptoms were plenty, but no one could tell Ratna and Lokesh what was making their son so sick.

“We took him to 4 hospitals here in Bangalore, we even took him to hospitals in Tamil Nadu. But nothing. They did so many blood tests, they thought it was cancer first. They told us he had small tumours in his stomach.  I remember praying, I know how dangerous cancer can be, I’ve heard stories. It wasn’t cancer, we were relieved. But soon we found out how dangerous even this disease is.”

Madan’s nose, forehead, hands and leg swell up a lot now. He is currently fighting a viral infection. He has to take injections every other day. Lokesh and Ratna have already spent 4 lakhs in one year on all his tests and medicines. 37 lakhs for his transplant is unimaginable.

They haven’t given up, but they can’t save him on their own

Lokesh works as a daily wager who helps load goods in a factory. He earns Rs. 200 when there is work. Ratna now has only 2 homes that she works at. They both have borrowed from their employers and family. Even though with both their incomes together, they might not even be able to save a quarter of the amount needed to save their son, they continue to fight.

Ratna and Lokesh can’t do it on their own. They need your help to afford Madan’s bone marrow transplant. They are relentless in their fight, a helping hand can take them a long way.
Donate 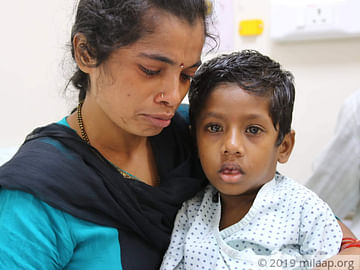 They thought it was cancer, but his disease is equally dangerous

Madan needs a bone marrow transplant urgently. Only you can help him.