While His 3-Year-Old Fights Cancer, This Father Has Nothing Left To Save Him | Milaap
loans added to your basket
Total : 0
Pay Now

While His 3-Year-Old Fights Cancer, This Father Has Nothing Left To Save Him

“My son, Likith, is just three years old. What has he even seen in life? How can such a young life be in danger? I am a farmer who makes a living by growing crops. I cannot even bear to see my crops die. How can I see my little son die?” – Chethan, father

Likith lives in a small village in Chikkaballapur district in Karnataka with his parents and older brother, Sachin. In the last few months, Likith has lost a lot of weight and hardly eats.  His brother asks what is happening to his little brother and why he has lost his hair. Likith's parents are unable to explain to him as he is also just 6 years old.

He has Hepatoblastoma (liver cancer). It is a very rare cancerous tumor that starts in the liver and usually affects children between 0 and 3 years. Likhith's stomach swells up and it pains a lot. The little boy screams out in pain. The doctors have said that if not treated in time, the cancer cells can spread to other areas of the body.

Likith has become very weak.  He has also become very quiet and distant. He is not able to adjust to the hospital surroundings.

"He says he wants to go play with his brother and friends. We don’t know what to say to him. He is so young, what can he understand.” – Bharati, mother.

When Chethan was informed that his youngest son has cancer and would require almost 14 lakhs, he was left speechless and broken.

Chethan earns Rs 4000 through farming and running other small errands in his village. He says he has left everything back in the village and has come for his son's treatment. He has taken a small loan to take care of the daily expenses. Arranging 14 lakhs is next to impossible for this poor farmer.

Chethan has no idea how to afford such a huge amount. Likith needs to undergo chemotherapy and surgery to recover. This poor farmer without an alternative is now in desperate need for your help to save his son. 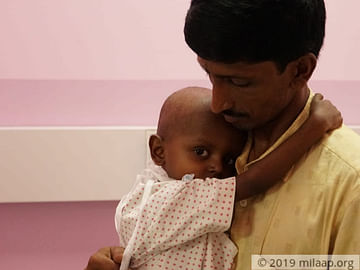 Likhith Has Become Very Quiet And Distant, He Just Wants To Go Back Home

Chethan has no idea how to arrange 14 Lakhs for his son's treatment. You can help him