This Village Library Started By Children Will Close Without Help | Milaap
loans added to your basket
Total : 0
Pay Now

You are sending a message to
Gnanasekar
Go back

This Village Library Started By Children Will Close Without Help

Shares
Shares
Share on whatsapp
About 40km from Dharmapuri district, at Nagadasampatti village, 27 children decided to join the Children's Parliament – an international initiative to encourage social participation in children. They came together every week to discuss issues they faced in their school and village. It proved to be a game-changer for the village.

Unfortunately, Nagadasampatti turned out to be too far-flung for the initiative to continue beyond a year. Yet, the students aged from 12-17, decided to meet every week because this platform had become their way of changing what they felt was lacking in the village. They have many success stories to their credit that they recount with pride.

15-year-old  Abitha says, “My classmate from school was to be married even before finishing school. I felt so bad and helpless about it. When I told my parents, they asked me not to meddle in others' business. Her parents knew what they were doing. But I was worried about my friend. My friends and I decided to call child helpline and we stopped the marriage.”

These children stopped an age-old social crime that so many practice with impunity! Now, the village has hardly any reports on child marriage. This has given the children the confidence to really shape the future of their village.

These first-generation learners decided to start a library

These children have grown up with poverty, realities of class and caste conflicts, and social taboos like child marriage and child labour. But they are determined to stay together and fight it. Being the first-generation learners of the village, they understand the importance of education and reading.
They named their library 'Inclusive Knowledge Resource Centre'

And their vision of their village has a place to read – a library. When having three square meals a day is a struggle, buying books to read is a luxury. The only government library they had in village shut down four years back. They wrote to several authorities for re-opening the library but nothing worked. So, they decided to open one of their own.

“We did not have any funds with us, our parents are struggling to run the family, we were not sure if they’ll support our idea, but to our surprise, everyone was happy to contribute to our library,” says Gnanasekar - another child leader.

Children who studied in the street lights, made use of this library to study

They found a space for the library. It was inaugurated on May 1, 2017. Mr Manikandan, Deputy Superintendent of Police, Pennagaram, was the Chief Guest. He was surprised by these children’s efforts and promised to donate the books in the Government library. NGOs that the children had written to, also contributed. They have more than 1,700 books!

Library has become their second-home

For most of the children, the library is their second home. Children who studied under streetlights use the library to do their homework. They also decided to make use of the space to organise awareness and empowerment programs.

They have named the library “Inclusive Knowledge Resource Centre”. A name that truly does credit to the children's thought process.

They don't have funds to pay rent and appoint a librarian

They don't have funds to pay rent for their library

The children's dreams and efforts are at stake! They have run out of funds and have defaulted on rent for the last two months. If they don't pay rent soon, the library might have to close permanently.

It is not just a library that will shut down. It is the only place where the children see possibilities of success and not the hurdles in their way. It has been a safe place for their thinking, planning and discussions.

They conduct awareness programs on weekends at the library

"As we don't have a librarian, it is kept closed in the morning hours. If we get more funds we'll appoint a librarian and pay for her/him. We have decided to appoint a  physically challenged person" says Sathya.

These children are really an inspiration to every one who wants to beat odds and achieve their goals. It’ll be terrible if these children’s dreams and efforts go in vain because of lack of money. Your contributions can help the school students run their library.

Funds will be utilised to pay rents and salary for the librarian. 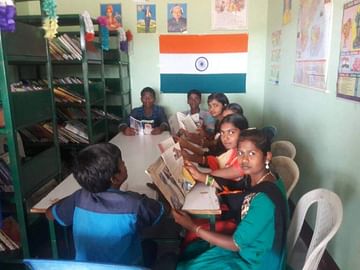 They have to close the library if they don't get funds.

Help them to have a library in their village. Your contributions can make it possible.