Parents With No Source of Income Are Struggling To Save Their Daughter From Cancerous Kidney Tumour | Milaap
Receive tax benefits by donating to this cause. 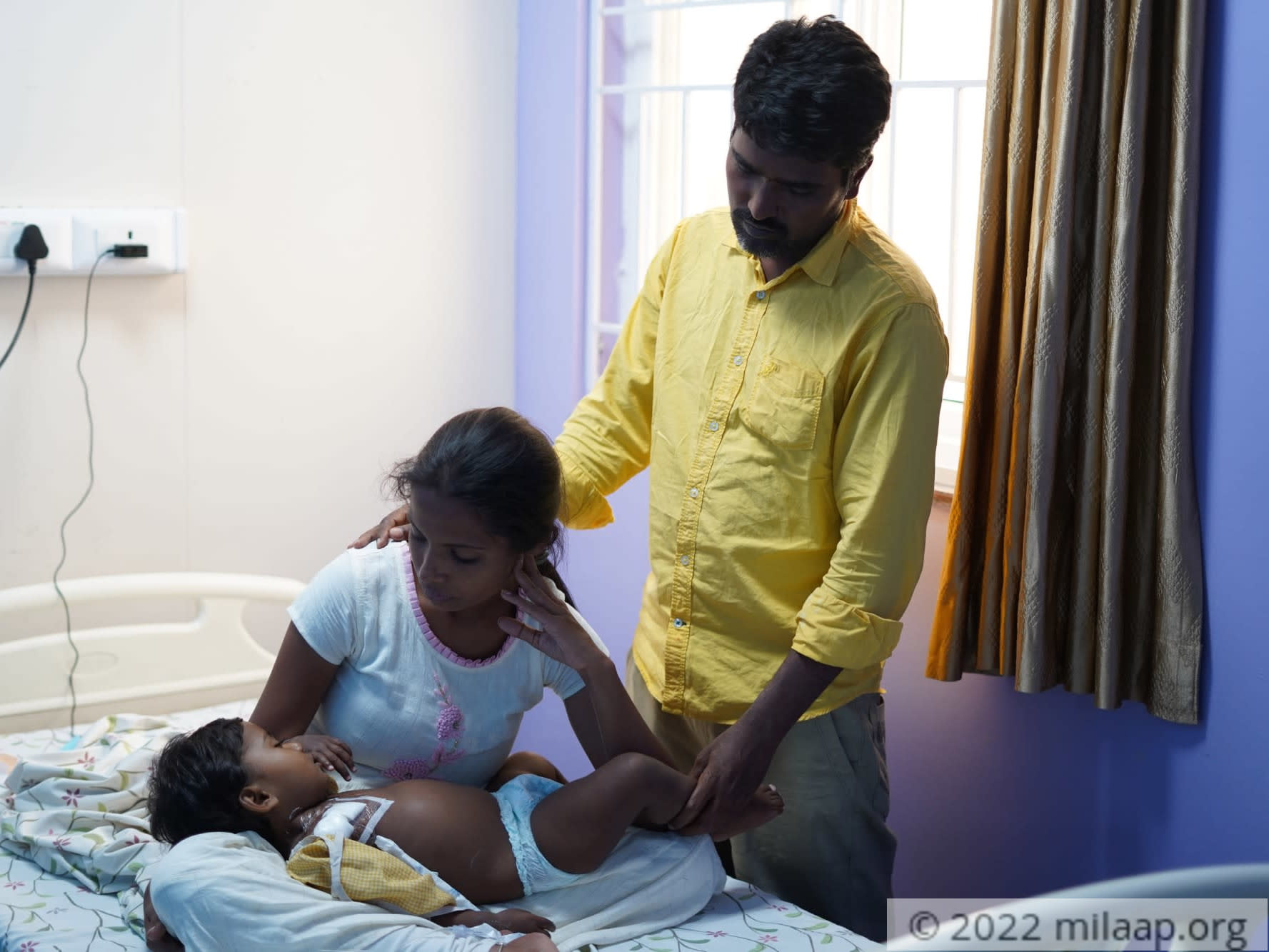 “In just 2 weeks, I have borrowed 3.5 lakhs from everyone I know for my daughter’s chemotherapy sessions. I’ve sold my land and my wife’s jewellery. Yet it isn't enough. I’m afraid I’ll fail as a father if I cannot save my daughter from cancer. ” - Eshwar, father

Eshwar and Anitha knew something was wrong when they saw blood in Lavishka’s urine, one day, in November 2021. With timely medication after the doctor's consultation, she got better. But a month ago, Anitha got worried when the right side of Lavishka’s stomach was abnormally swollen and hard.

“I was given the devastating news that Lavishka has a cancerous tumor near her kidney which will spread if not treated immediately. She never showed any obvious sign of cancer. Sometimes a cough at night or a gassy stomach, but nothing serious.” - Anitha, mother

Lavishka has a Wilms tumour, a rare kidney cancer that doesn’t show any symptoms unless it starts spreading aggressively. The tumor has spread in the right side of her kidney. She needs to undergo chemotherapy and surgery, followed by radiotherapy to get rid of the tumour and beat cancer.

She’s in excruciating pain every day

Anitha cannot help but weep, as she watches her little one being adminstered chemotherapy. For the past few weeks, Lavishka has spent most of her time in the hospital getting chemotherapy or treatment for the side effects. She is unable to sleep at night. She vomits continuously - both the the food she eats and the water she drinks.

“I wish there was an easier way to cure this cancer. I wish my daughter didn’t have cancer at all. The treatment is harsh and painful. I feel miserable and helpless for making her go through all of it.” - Anitha, mother

Eshwar used to work as a helper in a medical shop, before lockdown took away his job. Since then he’s been struggling to find a job while Anita managed to get a job, 2 months ago. But she had to resign from her job to take care of her daughter. They borrowed money, which has to be repaid with huge interest, to start her treatment. They could only afford 3 chemotherapy cycles and are now running out of money to continue their daughter's treatment.

“Lavishka just started walking on her own when she got diagnosed with cancer. With huge debts on our shoulders, we were able to start her chemotherapy, but we're struggling to continue. It is just the beginning of her treatment and she needs a surgery and radiotherapy as well, which is difficult for me to afford. I need your help to save my little girl.” - Eshwar, father

These poor parents are in desperate need of your help to save their daughter from the cancerous kidney tumor.
LE
Patient Lavishka Eshwar is 1 year old, living in Uppada, Andhra Pradesh
NH
Being treated in Narayana Harudayalaya Hospitals, bengaluru