They Took Their 2-Year-Old For An Eye Checkup, And Discovered She Has Cancer | Milaap
loans added to your basket
Total : 0
Pay Now

They Took Their 2-Year-Old For An Eye Checkup, And Discovered She Has Cancer

“Her eyes were swollen. We thought it was some infection or insect bite. At the eye hospital, they did a blood test and... we were told she has cancer. Can you imagine getting your 2-year-old baby for a normal check-up and then suddenly they tell you she has cancer?  I just couldn't believe what was happening in our life all of a sudden,” - Anjum, mother

Baby Thaha Fatima has been diagnosed with Acute Myeloid Leukemia, a cancer of the blood and bone marrow.  The parents are unable to come in terms with their daughter’s sickness yet. The mother’s cries for her little daughter is heart-breaking to witness.

Cancer… it’s such a scary word, I had only heard it in movies before

"She was such a normal and healthy little girl. She used to get a fever every now and then but after a couple of days with general over-the-counter syrups, she would be fine. We thought it is due to changing weather. It was just the swollen eyes a few days ago that concerned us. But we never imagined it could be something this big! It’s such a scary word; I had only heard it in movies before.” – Anjum, mother 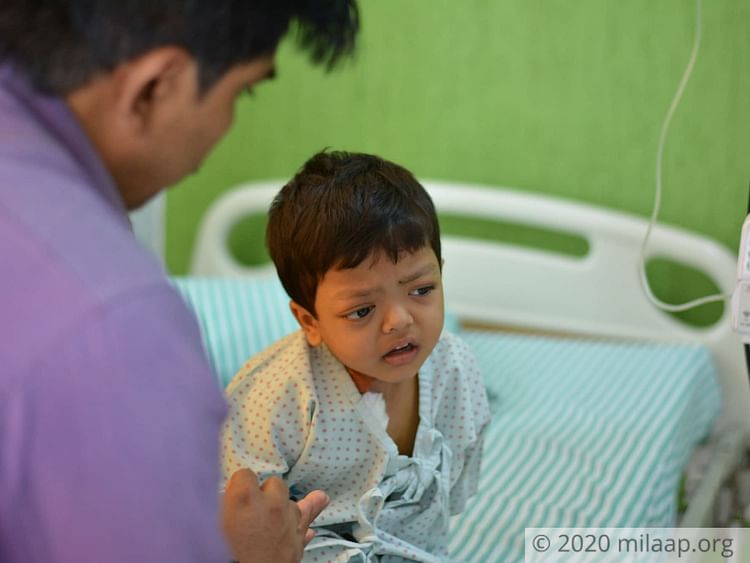 Mansur is desperate to save his daughter

“I borrowed 2 Lakh Rupees from my friends. I said I will repay within a few months. I’m not sure if I can though. And now where will I go for more money? I can’t even think of any source. If you can help me now, I’d be ever grateful to you and will always keep you and your family in my prayers. I’m just a helpless father begging for my daughter’s life.” – Mansur, Father.

Baby Thaha has to undergo intense chemotherapy for the next few months to fight her cancer. The days ahead are not going to be easy for her, nor her parents. You can help them in their hours of distress.
Donate

Baby Thaha has to undergo intense chemotherapy for the next few months to fight her cancer.