11-Year-Old Is Unrecognisable Due To Monstrous Facial Tumour That Has Claimed Her Vision | Milaap
Receive tax benefits by donating to this cause. 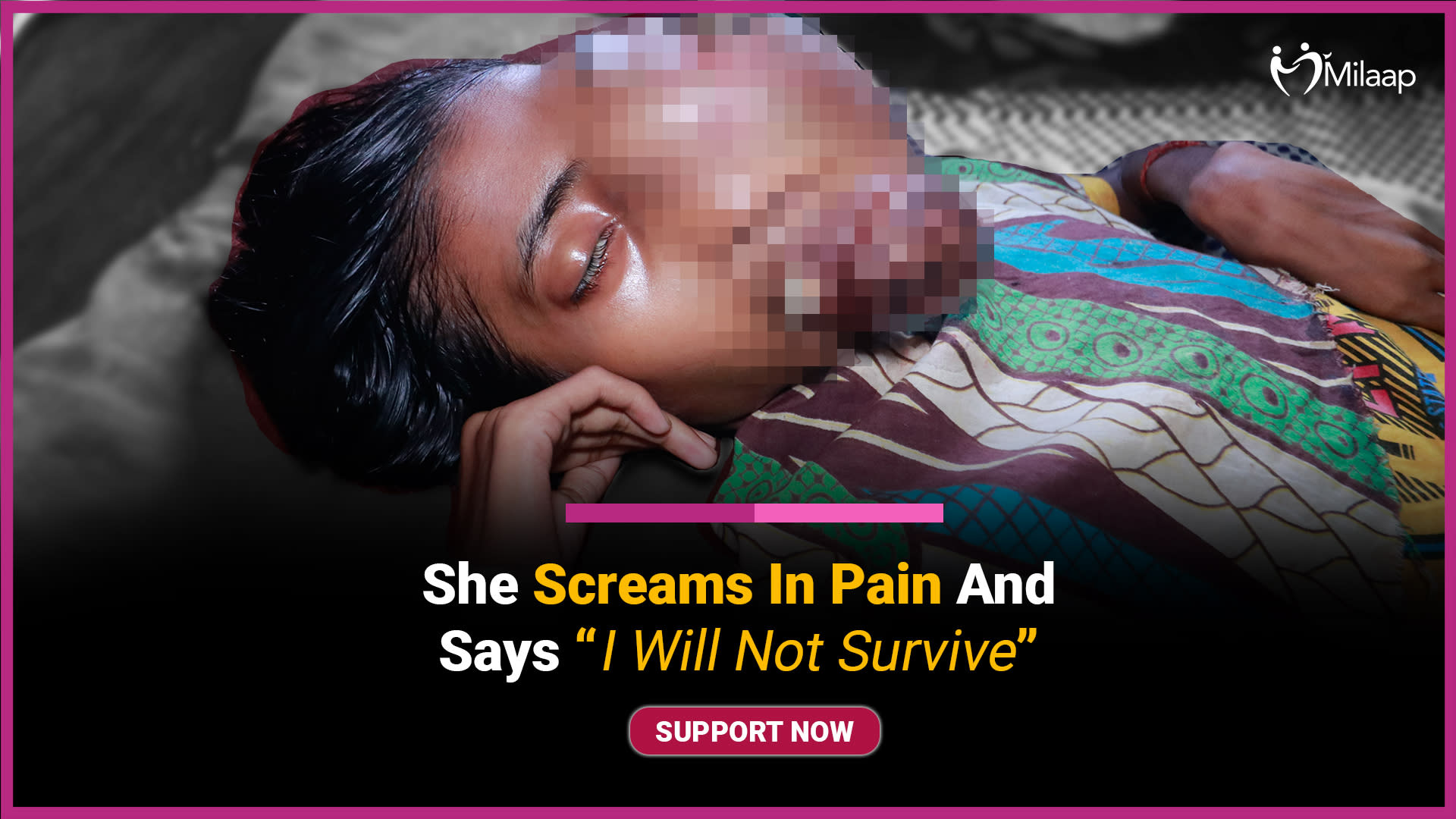 “After the facial mass developed, she hasn’t been able to eat or drink anything. She has lost her sight now, and can’t see anything or anyone. Neither can she walk, talk or use the bathroom by herself. She gets violent and attacks when the pain increases. My daughter keeps on screaming all day due to pain. She has been in this state for the past 5 months.” - Rekha Devi, mother

Just less than a year ago, Khushbu Kumari was like any other girl her age, while helping her parents with daily chores. But today, she lays in bed, writhing in pain from a monstrous swelling that has completely disfigured her face. 11-year-old Khusbhu suffers from intra cerebral orbital tumour, a growth that develops in the orbit or the bony socket in front of the skull that contains the eye.

What started as a mild eye pain has turned the 11-year-old's life upside down, after it escalated into a full-blown tumour.

"At first she had eye pain, it was followed by bouts of headache and then her left cheek started to swell and the facial mass came out. Now, this swelling is increasing in size with each passing day. We have taken her to various hospitals in and around Jharkhand, and even some far away from here, but to no avail. The tumour is only growing and her health, in turn, is rapidly worsening." - Rekha Devi

‘The pain is too much for her to bear, that she thinks it will kill her’

Apart from limiting her to the comforts of the bed, the disease has had taken a mental toll on the young girl, who remains perpetually tense.


“She used to take care of the house and keep everything in order. But now… look at the way she is suffering. She used to talk a lot, and run around the house. Now she can barely move her body. Sometimes, she will call out to me over and over again, just to tell me in broken words that she won't survive…” - Rekha Devi, distraught

Her father’s failing health has added to the family’s misery.

Khushbu’s father used to work as a labourer, but began to fall severely ill. Forced to quit his daily wage job as he couldn’t put in even a day’s work due to his declining health, he stays home all day. Now, without a steady source of income, the family has to often seek financial help from others.

"With my husband unable to work, I had to step in as breadwinner. I earn only 2,000 rupees a month. How will we repay our debts with that money, when we are already struggling to afford food? We are very poor. Had her father been well, we would have managed with his income, but right now, even that is not possible.” - Rekha Devi

Without surgery, her condition could turn dangerous

If left untreated, this tumour could cause irreparable damage to the young girl, and chances are that it could even turn cancerous. She needs urgent medical help, before it is too late. According to doctors, Khushbu will need surgery and neuro-intervention, along with extensive facial reconstruction. Her treatment would run for six months and cost INR 50 lakh, an amount that her mother can never afford single-handedly.

"We have done everything we were asked to. We are very poor and did all that we were capable of. Now it is just out of our hands, and we are desperate. How would you feel as parents if your daughter suffered like this? Please help us save our daughter. We just want our Khushbu back.” - Rekha

This mother is in dire straits and appealing to you for help to save her ailing daughter. Click here to donate.
KK
Patient Khusbhu Kumari is 11 years old, living in Giridih, Jharkhand
AC
Being treated in Aster CMI Hospital, Bengaluru, Karnataka