First To Become An Engineer In Her Family Of Masons And Weavers, Today, Kavitha Is Battling Cancer | Milaap
loans added to your basket
Total : 0
Pay Now

First To Become An Engineer In Her Family Of Masons And Weavers, Today, Kavitha Is Battling Cancer 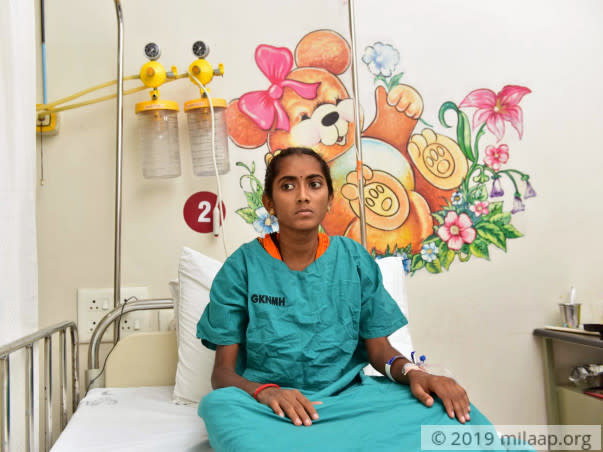 Newspaper clipping talking about how well Kavitha fared in her 12th exams
When she was in 6th std, Kavitha’s parents and elder siblings were struggling to find a job. It was a period of recession, and their only option was to leave Salem and work in Bangalore for a few years. So, leaving behind Kavitha and her little brother all alone, the family left to take up masonry. Kavitha took care of her brother all by herself, for 7 whole years. Despite the responsibilities put on her shoulder, Kavitha worked hard and aced her exams. With her photo in the local newspapers, and a gold medal around her neck, she made her parents and her neighbourhood proud. Today, when it’s time for her to taste the fruit of her hard work, she is battling a deadly cancer all by herself, unable to afford the required treatment.

"While everyone from her class reported to their jobs, my daughter was admitted in the hospital..."

One morning, just a week before her final exams, Kavitha noticed a lump on the right side of her neck. It was not an insect bite like every thought.  Within 10 days later, the lump grew exponentially and it began to pain. When taken to a nearby hospital, the scans and tests revealed that there was a cancerous tumor in her neck. She had to be admitted for a month in a hospital outside Salem.

“She was at the end of her course when this happened. She did not agree to miss the exams. Years of hard work would go waste. Despite being given a news like this, she studied hard and aced all her exams. She had become an engineer. The very next month, when everyone from her class reported to their jobs, my daughter was admitted in the hospital” – Malliga, mother.

She underwent chemotherapy, and was declared cancer-free

She was put on chemotherapy immediately and after a month at the hospital, the lump in her neck had decreased noticeably. Following the discharge, she went to the hospital every week, to receive the medication. 6 months later, she was declared cancer-free! But the cancer relapsed and a stem-cell transplant is her only hope now

“For us, cancer means death. To be told that she was cancer-free, we were beyond joy. But, just when she was getting better, the lump on her neck grew. They said it had come back and that it would keep relapsing. We did not know what to do! We did not know how to make it go away.” – Malliga.

Currently, Kavitha is undergoing a radiation treatment to dissolve the lump. Following that, she has to undergo a cycle of chemotherapy. A week after its completion, she needs to receive a stem-cell transplant, without which it’s difficult for her to survive. The donor is ready, and so is Kavitha. But the parents can’t afford the treatment.

Having sold his cows goats and his loom, Rajendran still can’t afford to save his daughter

Rajendran is a weaver who works for daily wages, and earned up to 2500 a month. The initial cycles of chemotherapy costed 7 lakhs and Rajendran had to sell all that he owned - his loom, the source of income; the cows and the goats. He has borrowed money from acquaintances and is neck-deep in debts. The stem cell transplant, including supportive care will cost them 30 lakhs, and the parents are helpless.


“Coming from a family of masons and weavers, she stood out. She made us proud and known to people. She got placed in one of the biggest companies. But she couldn’t go.I don’t understand why God chose the brightest of us. It could have been me. Why her? Where will I go now, for so much money? Help me save my daughter.”

You are a fighter ... U will win this crisis too

34 others have contributed
Click here to know more about Kavitha

Donated to this campaign via Paytm? Click here if you can’t find your donation listed below.
P
Prathiba donated Rs.10,000

You are a fighter ... U will win this crisis too