16-year-old Daughter Of A Farmer Who Committed Suicide Now Has No Aid In Battle Against Cancer | Milaap
loans added to your basket
Total : 0
Pay Now

You are sending a message to
PraveenKumar Bidri
Go back

“Her father was not there for her. He was a drunkard, who did not go to work, and plundered whatever money he loaned from people. Eventually he committed suicide leaving behind a wife with two children. Now, Kaveri is hanging onto life with all her might, and we are just helpless.”

This is the story of a 16-year-old girl named Kaveri from Gulbarga. She comes from a family that has seen hardship for years and continues to suffer. What began as a fever and was misdiagnosed as typhoid turned out to be blood cancer. Kaveri does not fully understand what she is going through and needs all the help she can get to win this dreadful fight.

Dolappa, Kaveri’s maternal uncle has been the guardian angel for this family even before the passing of her father. Her mother depends on Dolappa to care for this abandoned family, and he has been a pillar of support through their tough times. Speaking of her condition brings tears to his eyes, and his voice breaks when he says,

“I have seen her grow up. She has been our baby girl. I enrolled her in college. I don’t know what to do or where to go right now! She keeps asking me if she is going to die because the word cancer scares her. All I say is that the injections are going to cure her fever and she will be back to college in no time.”

Cancer is the last problem this family needed

Kaveri was enrolled in 1st PUC last year. In 2 months she began having a persistent fever. When Dolappa took her to a local hospital, they diagnosed her of typhoid. After 8 days of treatment, she was discharged. 5 months later, she began having similar symptoms. This time she had a high temperature. They changed several hospitals and finally heard the diagnosis.

“Acute Lymphoblastic Leukemia. We are all not well-read. My brother understood when the doctor explained it to him, and of course, everyone gets a shock when they say cancer. I am still in shock. The child did not know until a few weeks ago. I did not want to tell her. She had already been through enough without cancer attacking her. Now, it felt like we were all cursed from the beginning.” - Kaveri's mother.

Hard to pay bills when there is no income

The family changed several hospitals as Kaveri was not getting the right treatment. Finally, she began treatment at HCG in Gulbarga. She is slowly recovering with chemotherapy.

“Yes, her disease can be dealt with chemotherapy. The problem is we need to give her love, care, time and manage the expenses. They said the approximate cost for this treatment will be Rs. 6 lakhs. My brother has already spent Rs. 3 lakhs on our bills so far, and cannot afford to fund her entire treatment. There is no other person who earns for this family. Kaveri’s brother is also studying. We cannot jeopardize either of their education. We cannot jeopardize her life.”

Kaveri is quite unaware of her circumstances most of the time because nobody tells her what is going on. It has been difficult for her to fight when people are trying to protect her from the truth, and affordability stands as an obstacle.
Your support can help this 16-year-old survive this terrible disease and work towards changing her life.

The specifics of this case have been verified by the medical team at the concerned hospital. For any clarification on the treatment or associated costs, contact the campaign organizer or the medical team.
Click here to contribute to Kaveri or for more details on this campaign.
Donate 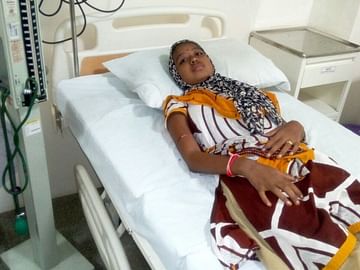 Her family now turns to you for help in saving her from blood cancer.