Farmer Who Has To Borrow Even To Take Son To Hospital Can't Afford His Life-Saving Transplant | Milaap
loans added to your basket
Total : 0
Pay Now

“ We live in a remote village in Hingoli, Maharshtra and the nearest good hospital is more than 300 km away. I have to beg people to lend me money to just take him to the hospital. We have to travel 60 km in crowded buses, where my sick son is forced to stand most of the time. For the rest of the journey, we don't have a choice but to ask for lifts from kind strangers if we miss the train. But I am determined to save Kanhya's life. I am ready to bear anything to save him, ”-Rajeev Kadam, father

6-year-old Kanhya is suffering from Thalassemia, a severe blood disease where the body produces abnormally low amounts of hemoglobin in the blood. Kanhya was an active and playful 6-year-old whose favorite activities included singing and playing in the fields with his brother Arjun (8). But 4 months ago, everything changed when he stopped eating food altogether and started vomiting continuously. It was at a hospital far away from home that little Kanhya was diagnosed. And ever since then, he was advised to go for blood transfusions every 15 days, but he had to miss many sessions because of low funds.


“In the beginning we did not understand how important these transfusions were to his survival and missed a few sessions as I had no money to take him. But he would faint all of a sudden and become so pale and weak. He would also refuse to eat anything”-Rajeev.

People refuse to believe that this little boy is sick

Earlier, the boy used to be scared of the hospital and the painful needles. But now he has accepted it as a part of life. After that, he goes back to being his normal self – playing with his brother and running around in the fields. As Kanhya appears cheerful most of the time, his neighbors and relatives have a difficult time believing that he is suffering from a deadly blood disease.

“We have shown them test reports and doctors’ notes, but they say things like ‘He is not bedridden or anything. He does not even look like sick. How can we believe this?’”-Rajeev.

This poor farmer needs your help to save his son

Rajeev is a farmer who grows soyabean on his 2 acre land. He earns less than Rs 3000 monthly as his crop has not done very well this year. He struggles to buy food and clothes for his family, and Kanhya’s hospital visits have become an added pressure. Blood transfusions may help in sustaining this little boy’s life, but they are not a cure for his condition. The only way that Kanhya can escape this is through a bone marrow transplant. Fortunately, Kanhya’s brother Arjun is a matched donor and is ready to donate his bone marrow. The only obstacle they face is lack of money.

“It costs me more than Rs 3,000 for a single trip to the hospital – I earn less than that in a month. Even if I save money by starving, I will never be able to accumulate such a big amount. I have been asking everybody I know for help, but it is being delayed due to one reason or the other,”-Rajeev

Your support will save this boy's life 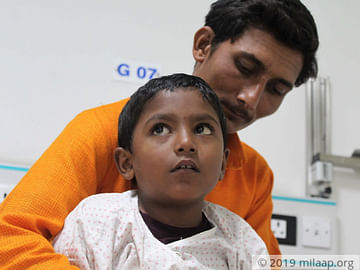 You can give Kanhya a life free of painful blood transfusions and save his life. Please support.