After Losing Husband In Accident That Also Left Her Daughter Gravely Injured, This Mother Struggles To Save Her | Milaap
Receive tax benefits by donating to this cause.

After Losing Husband In Accident That Also Left Her Daughter Gravely Injured, This Mother Struggles To Save Her 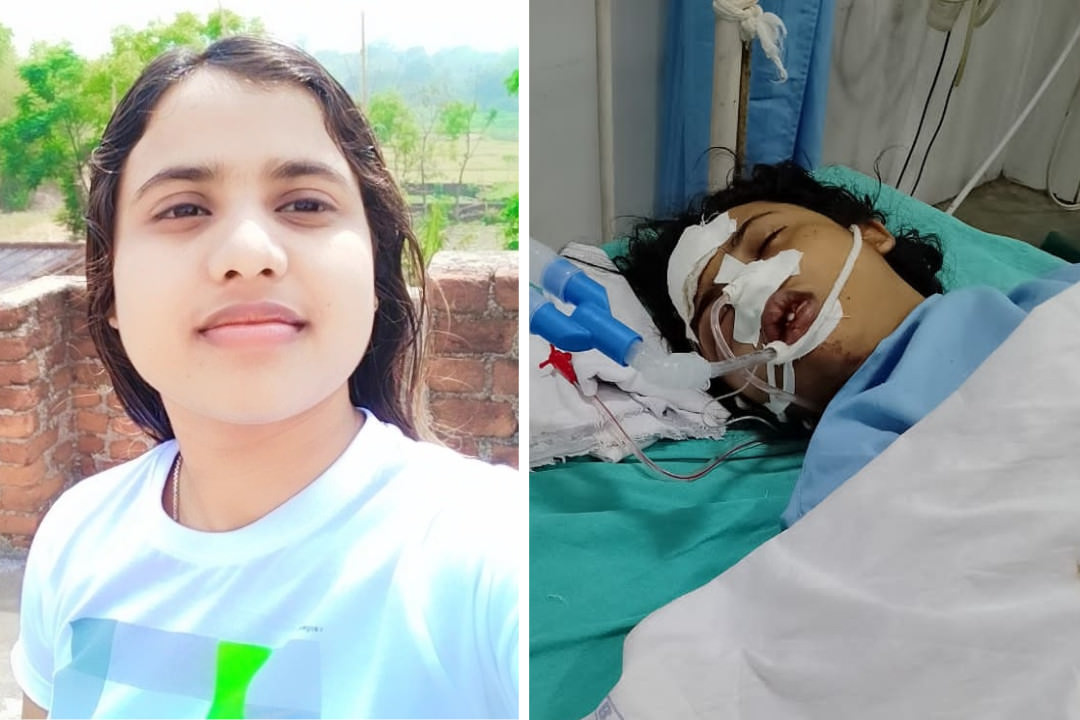 "That day, my husband told me that he's going to drop off Kajal at her tuition. He asked me to take care of the field and said he would join later... But he never came back home to us alive, and my Kajal is fighting for her life in the hospital." - Sita Devi, mother

On the evening of May 31, Kajal, and her father, Lakshman, who were riding a two-wheeler, met with a fatal accident. Lakshman lost his life on the spot, while Kajal was rushed to the hospital with life-threatening injuries. A third person involved in the collision also passed away at the scene.

Kajal (L) with her parents and younger sister.

She was born to her parents after several years of marriage

For nearly 15 years after their marriage, Lakshman and Sita Devi had been childless. It was only after numerous efforts and prayers that Kajal finally came into their lives. They cherished her dearly, and brought her up with a lot of love and care.

"I spent a lot of money and visited a lot of doctors, and only then was I able to conceive Kajal. She has always been a very good child, our miracle. It’s been 14 days since I last heard her voice, and I miss her a lot. God gave us Kajal after so many years, and now he wants to take her away..." - Sita Devi, breaking down.

Young and ambitious, she wished to look after her old parents

Kajal was a diligent student, and was pursuing her 12th Grade. The 16-year-old would often talk to her parents about her ambitions, her future and career dreams. She had vowed to never get married so she could secure a high-paying job, and remain by her parents’ side.

"Kajal wanted to study English, so her father got her admission in one of those classes. She was empathetic towards her father's labour and would often talk about taking care of us during our old age." - Sita Devi

This distraught mother she has lost everything to the accident, and is appealing for help

Lakshman was the breadwinner, he used to toil the fields and provide for his family with his meagre earnings. Now, with her husband gone forever, and her daughter hanging onto life by a thread, Sita Devi is completely devastated. She prays relentlessly for God to spare Kajal; from a cruel fate, because her two daughters are her entire lifeline. But with her family’s financial condition being so poor, Sita Devi fears a future without her precious daughter.

As news spread about the accident, several people came forward to help the 16-year-old. A total of INR 1 lakh was raised and handed over to the family. Sadly, Kajal needs a lot more than that. According to doctors, Kajal has suffered multiple facial fractures and needs to undergo plastic surgery and oral and maxillofacial surgery.

"My husband was the only earning member in the family. He would make 200 to 250 rupees, a day. What can you do with that money? It was enough to make ends meet back then. But now, with Kajal’s treatment costing 20 lakh rupees - there is no way we can afford that much! I can’t imagine losing her. I won’t be able to live without my daughter.” - Sita Devi.

Sita Devi is counting on you to help her save her oldest child. Your kind contributions will enable the grieving wife and distressed mother to provide urgent treatment for her daughter.
KK
Patient Kajal Kumari is 16 years old, living in Bokaro Steel City, Jharkhand
AC
Being treated in Aster CMI Hospital, Bengaluru, Karnataka