9-Year-Old Is Fighting For His Life For 2nd Time This Month, You Can Save Him | Milaap

9-Year-Old Is Fighting For His Life For 2nd Time This Month, You Can Save Him 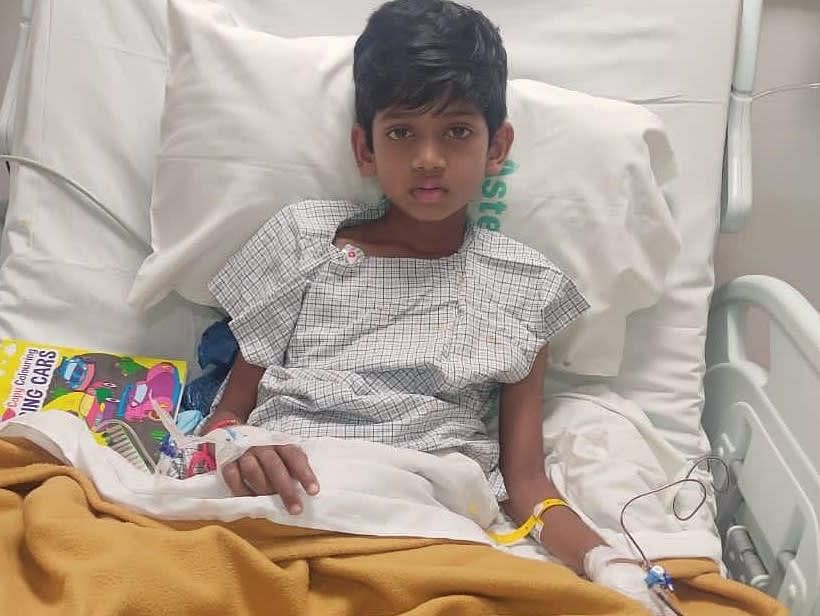 "We worked so hard, spent everything we had and more, trying to save our son from liver failure. In the end, our efforts even paid off! For 2 weeks we were walking on air, thinking we had saved our son’s life!
But then we had to take him back to the ICU, his condition more critical than ever. We never imagined it would turn out like this...” — Narayana, father

By an unfortunate stroke of bad luck, little Nithisu’s liver failure has led to a complication, despite the liver failure itself getting treated. Now, without a bone marrow transplant as soon as possible, Nithisu will not make it.
It’s hard for Nithisu’s parents, Narayana and Triveni, to believe that just 2 months ago their son had seemed perfectly healthy. All that changed when he developed a fever that appeared normal at first, only to become be far more sinister as the days went by.

“That first fever went away around 4-5 days later, after we gave him medicines prescribed by a local doctor. But less than a week later it was back, and this time his skin started turning yellow. The doctor told us not to worry, that jaundice wasn’t a big deal as long as we took appropriate care. But just a day later he became very serious, his stomach starting to swell like a balloon. He had to be admitted for 4 days at the hospital!” — Triveni, mother

Liver damage was only the least of his worries

“After those 4 days they asked us to take him to Hyderabad. We were already scared but that just terrified us, making us wonder what our poor son was going through! Soon after we got to Hyderabad, we got our answer. Nithisu started randomly screaming one day, with no control over himself, and doctors explained to us that he had such extensive liver damage that it was starting to affect his brain as well! With time apparently running out and no choice left, we borrowed as much money as we could and got him a liver transplant like the doctors suggested. For 2 weeks we even thought it had worked! But then we discovered a much larger problem, which requires him to get a bone marrow transplant!" — Triveni

Only a bone marrow transplant can save him now, and you can help

When he started falling sick yet again, 2 weeks after the transplant, doctors discovered that Nithisu’s blood count was extremely low. Further tests revealed the problem was in his bone marrow. Only a bone marrow transplant can save this little boy now.

“I weave sarees for a living. It’s been enough to put food on our table, but this? I don’t know what to do; I’m already lakhs in debt, because of the liver transplant, but now we need double that amount to save our son! Please, you’re our only hope now!” — Narayana

Little Nithisu’s life depends on your generosity. You can click here to donate, and save his life.
KN
Patient Kunuthuru Nithisu Reddy is 9 years old, living in Dharmavaram, Andhrapradesh
AC
Being treated in Aster CMI,Bangalore, Hebbal,Bangalore