This 14-year-old's Growing Pains Turned Out To Be The Most Dangerous Type Of Cancer | Milaap
loans added to your basket
Total : 0
Pay Now

Shares
Shares
Share on whatsapp
‘Baba, do you think I will be able to cycle after they have given me the artificial leg?’ - 14-year-old Jayjeet has so many questions since the doctors had to amputate his right leg. Biswajit, his father keeps assuring him that things will be fine and he will soon be on his feet. The truth is, Biswajit is uncertain that his son will recover, but determined to save him.

“Jayjeet loved cycling a lot. When he first told us about the pain we thought it was because of too much cycling. But when the biopsy results came out we were shocked to know that my son has cancer.”  - Biswajit

Only few days after Jayjeet’s 14th birthday in the 8th of June, he started complaining of a sharp pain in his right leg. The local doctors told that it was the result of his bones growing in size. They said it was normal for a teenager his age to have this kind of pain. But when his pain didn’t get better with time, they decided to take him to Bangalore for a second opinion. He was diagnosed with Ewing's Sarcoma - a cancer that occurs in and around the bones.


Jayjeet on the day before his leg was amputated

Biswajit and his wife, Shanti couldn’t afford to get their son treated in Bangalore. They brought him to Kolkata and got him admitted to Tata Medical Centre. Last November, he even had surgery on his right leg where he had the tumor.

“He had 11 cycles of chemotherapy and surgery. We were so hopeful that he would slowly get back to his normal life now. He could go back to school, his friends - things he has been missing for so long. But soon, an infection started growing in the operated area. We were scared and hoped that the doctors could fix this. But even a second surgery did no good - they had to amputate his leg finally,” - Shanti, mother.

Biswajit is out of work since last June, he doesn’t know how he can afford his son’s treatment

Since last June, Biswajit and Shanti have been running from pillar to post trying to arrange for Jayjeet’s treatment. Biswajit has been away from his hometown for the last 10 months and hasn’t been able to keep his job at the small shop where he used to sell kerosene oil.

“My salary was never enough but now that I don’t have a job, I am completely dependent on my relatives and friends. So far, I have spent more than 13 lakhs but Jayjeet’s chemo cycles are not over. He needs 3 more cycles and I need 3 lakhs for that. Please help me.”

14-year-old Jayjeet has lost his right leg to cancer. He is heartbroken but with chemotherapy he can fight back the disease. His poor parents are looking to you for help. 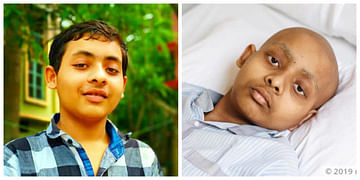 UPI: rzpy.givetomlpjayjeetp002@hdfcbank (Copy to clipboard)
Or
Click here to read the instructions before you make a bank transfer.