Fisherman Who Can’t Afford The Next Meal For His Family Needs Help To Save Son From Cancer | Milaap
loans added to your basket
Total : 0
Pay Now

Shares
Shares
Share on whatsapp
Even before the sun rises and warms the sea, Valampuri Rajan is at work. His is a tough job, he struggles every day. If there is one thing that brightened up his life and gave hope, it is his 4-year-old Jaswanth who used to wait at the shore with a bright smile and wave his hand every time he returned from the sea. But those days are gone, now Jaswanth is battling cancer, almost bedridden. Valampuri doesn't know if his son will live to see the next day.


Jaswanth and his father, before the diagnosis

A month back Jaswanth got a swelling on his neck, it looked like heat boils. The next day he got high fever and the swelling had increased. Valampuri and his wife, Surya took him to a local hospital. But the doctors discarded it as just an ordinary lump.  But the swelling soon got bigger and little Jaswanth was growing weak with every passing day.  Worried parents took him to a hospital in Chennai. There they were told that their son's tumour was cancerous.


"Doctors said that it is risky to operate the tumor and only chemo can cure it. He is unable to bear the painful chemo, just after the first cycle he got fever and infections. The swelling has reduced now but he vomits even if he drinks water. We can't bear to see him suffering so much," - Surya.

We lost everything to the cyclone last year

Cuddalore is one of the severely affected districts of Gaja cyclone that happened last November. Valampuri lives in a small village in this district. Many of the boats were washed away, water flooded their small homes. Just when they were returning to normal life and regaining all that they had lost, Jaswanth's diagnosis washed away all their dreams and hopes again. They live in constant fear of losing him to cancer.

I don't have money even for our next meal, how can I afford my son's treatment?

Jaswanth needs chemotherapy for the next 1 year. Valampuri does not have money to even buy medicines. He is borrowing money from his friends even for the next meals. Bills are piling up and he is desperately waiting for help. He needs 10 lakhs for the treatment which is beyond his means. Without your contribution, he'll be forced to stop the treatment and lose his only child.

Together, we can save 4-year-old Jaswanth, the only hope of a distraught father, a poor fisherman 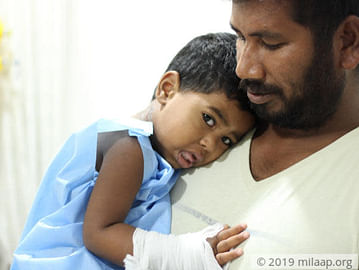 His Cancer Can Spread Rapidly And Kill Him Without Chemo Cycles

His fisherman father has lost everything to cyclone. He needs your help to save his son.

UPI: givetovalamburi1@yesbankltd (Copy to clipboard)
Or
Click here to read the instructions before you make a bank transfer.