Shares
Shares
Share on whatsapp
11-year-old Irfan likes his books and friends. He likes going out with his parents to new places in his hometown of Beed, and try new food. Talk to his parents and they’ll tell you how much he misses he little getaways with them, especially since he has been confined to his hospital bed in Mumbai. He is prone to infections, he can't leave the room - the mask is his constant companion.

Irfan was in class 4 when he was diagnosed with blood cancer. Irfan hasn't gone to school ever since his diagnosis.

His father, Shafiq Shaikh, vividly recalls the day the tragedy had befallen.

“It was Ramzan and we were celebrating. I had taken Irfan out after we broke the fast. He was so excited. I remember him having a glass of juice but then he started puking.  I panicked and rushed him to a nearby doctor’s clinic. The doctor gave Irfan medicine for puking and fever and we went home,” the father said.

Irfan’s parents thought that this was a case of bad stomach. But unfortunately this turned out to single-most tragic and painful thing of their life.

“Next morning, while my husband was at work, Irfan came running to me and started crying. He put his head on my lap  and cried saying that his hands were paining a lot. When his father came home from work, he ran to him and told him the same. We feared that something was wrong but cancer? Who thinks of that!” the mother said.

Irfan was diagnosed with blood cancer last June In Aurangabad. They took him to Mumbai for further treatment. The family kept travelling between their home town and the place their son was being treated, and this took a great strain on their already minimal resources. But even the chemotherapy couldn't cure the little boy completely - he had to undergo a bone marrow transplant. His 10-year-old sister, Naushid was the donor.

The transplant seemed a success - my children were recovering . But then Irfan developed severe pneumonia.

"The doctor says we have to be here for 6 more months, Irfan's condition is very critical. My daughter is back home alone and my wife is an emotional wreck these days. We do not have any financial support and the bad times don’t seem to end! I don’t know for what sin of ours our son paying the price...” questioned Shafiq.

Shafiq is a carpenter by profession and barely manages to make Rs 6,000 per month. That is only if he gets proper work throughout the month. If not, the family struggles to put food on the plate. So far, the family has spent Rs 3 lakh in their son’s treatment. The doctors have told them that they need to arrange for Rs 15 lakhs more.


“Where do I arrange all this money from? I keep waking up at night because I get worried some doctor will come and ask us to pay the amount now or take my son back home. I have no savings, and kids are small. I have to look after my daughter also, who is back home. We are already in debt and nobody is willing is help us now. I don’t know how to arrange for the amount that will save my son’s life,”-  Shafiq said.

You act of kindness can help this family of four celebrate their next Ramzan with all the love and hope. 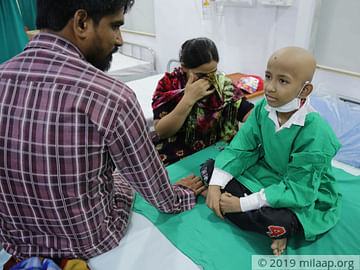 His parents are struggling very hard to save their 11-year-old, they need your support