2-Year-Old’s Leg Is At Risk Of Being Amputated Due To Rare Foot Deformity, Surgery Is His Only Hope At Walking | Milaap
Receive tax benefits by donating to this cause.

2-Year-Old’s Leg Is At Risk Of Being Amputated Due To Rare Foot Deformity, Surgery Is His Only Hope At Walking 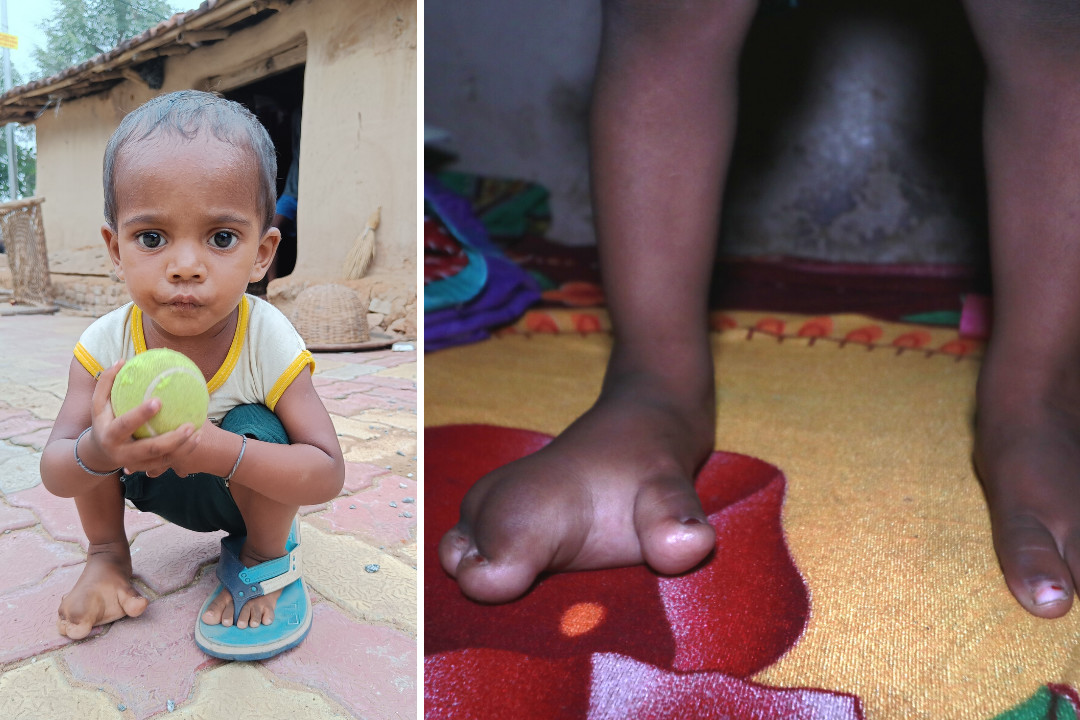 “My son, Himanshu, has had this foot deformity since birth. I didn’t have the capacity to seek well-known doctors or hospitals, so I tried my best to get him medical help with whatever money I had. But it has come to this point today, where he’s still struggling because we could never get him the treatment he needed.” - Manoj Kumar Mahato, father

2-year-old Himanshu was born with a serious limb defect. He was also diagnosed with osteomyelitis of the talus bone, a rare condition that contributes to limping in children. While the left leg looks normal, the right one has swollen, affecting the boy's balance. He can only wear his shoe on his one regular-looking foot. If his deformed leg is not treated at the earliest, it may have to be amputated.

‘They said he needed surgery, but we didn’t have the money for it’

When his parents first noticed Himanshu’s foot deformity after his birth, they sought several medical professionals for help. One of them asked to run an MRI on him, and his father, Manoj, pulled all stops to arrange for the money and get it done. But, the test reports revealed that his condition was quite serious, and the doctor’s only advice was for the child to undergo surgery - something Manoj could never imagine affording in this lifetime.

“Hearing this, I lost all confidence and courage. All I could think of was how cruel life is to my child. But now I have adjusted to it a bit, and just left it all to fate. What can people like me do? I don’t have the kind of money that can give him a better life.” - Manoj

‘I look at other kids playing and it breaks my heart’

Every time he would see other children running around and enjoying a regular childhood, it would prick at Manoj’s heart that his child had to live an entirely different reality. But now, he has slowly become accustomed to the pain of seeing his son suffer. However, Himanshu’s mother, Asha Devi, is yet to come to terms with it. What’s worse is that she has to endure insults from others due to her son’s condition.

"People would often say that it is due to my mistake. Even I think that we may have done some wrong in a  past life and God has punished our son. In that case, we should have been the one to deal with the punishment. At times, I wish he wasn’t born at all. Then, he wouldn’t have to suffer like this today… But he is still my son. No matter how he looks, I still love him the same.” - Asha Devi, mother

There is hope for Himanshu, he can gain a normal gait with surgery

Multi-stage surgeries and treatment can bring great improvement in Himanshu’s condition. According to doctors, Himanshu will need to undergo multiple procedures including bone and soft tissue reconstruction and physiotherapy, to regain control of the motor function in his right leg. The time span for his treatment would range between 6 and 12 months. He may need secondary corrective surgeries later, but he has to see through follow-up care for the next 8 to 10 years.

But for Manoj, who works as a motorcycle mechanic, his expensive treatment is a distant dream. He earns merely INR 3,000 each month, which is far too less for him to provide for his family, let alone afford his son’s treatment.

"Some months I earn Rs 4,000. But that is not enough. I have a family to feed. I borrowed some money from my friends a year ago for my son's treatment. But I am finding it very difficult now, especially with my financial constraints… I can't even repay them. There is no way that a poor man like me can ever arrange for INR 25 lakhs." - Manoj

With treatment possible, the family deems that there is light at the end of the tunnel. But they need your help, as they themselves aren't capable enough to get Himanshu the treatment. Click here to donate.
HK
Patient Himanshu Kumar is 2 years old, living in Baliapur, Jharkhand
AC
Being treated in Aster CMI Hospital, Bengaluru, Karnataka