This Mother Is So Close To Bringing Her Daughter Home Alive, But She Can't Without Your Help | Milaap
loans added to your basket
Total : 0
Pay Now

This Mother Is So Close To Bringing Her Daughter Home Alive, But She Can't Without Your Help

Shares
Shares
Share on whatsapp
16-year-old Hiba requires highly intensive care and stay under 24x7 observation, after very recent and invasive surgery. She is in urgent need of funds to pay for her treatment. This is her story.


“Two weeks ago, when the doctor came in with the report and told my family that my daughter's liver was in ‘acute failure’, I was convinced that they had made some mistake. Maybe they mixed her report with someone else’s, or maybe the lab technician didn’t do the tests correctly. She's only 16 years old. But the doctor just looked at me and… she just shook her head. There was no error. If  she didn’t get a liver transplant within the next 48 hours… she would die.” – Sajira, mother.

Hiba is the precious and only daughter of Shaji and Sajira, hailing from a town in Kerala small enough that everyone there knows and loves her. In the first week of August, Hiba started feeling increasingly weak and tired all the time, developing occasional and light fevers. Not wanting to worry anyone unnecessarily, she never mentioned it to them. But two weeks later, her condition worsened very rapidly. She started having uncontrollable vomiting and extreme weakness.

Young Hiba’s parents immediately took her to a hospital where she was admitted into the ICU on arrival. After 4 days of care, when her symptoms didn’t show enough improvement, extensive testing was done. That’s when this poor family discovered that young Hiba had Acute Liver Failure.

What followed were the most hectic and stressful two days in this family’s life.

“My husband and I moved Hiba to a bigger hospital the same day, almost 150km away, where they would be able to do such a surgery. The next morning, my husband got the tests to see if his liver was a match for donation and by God’s grace it was. Preparation started immediately, and then his surgery itself started in a few hours. It was late in the evening when Hiba’s surgery started, and it went even later into the night. By then I had been awake for 3 days but I still couldn’t sleep. I was terrified that I would wake up and Hiba wouldn’t… my Hiba wouldn’t be here.” – Sajira, mother, weeping

Young Hiba’s surgery was a success, but it may have been for nothing

In an incredible display of love and support, Hiba’s friends – with the help of the school she studies in – organized a local drive to raise money for her surgery. Everyone in the neighbourhood knew her family as well, that Shaji was an auto driver and Sajira a kindergarten teacher. They knew the cost of such a procedure would be beyond these poor parents, so they all contributed and even helped share her story. Together, they were able to raise enough money to cover her medical bills up until this point.

But it’s not over. Young Hiba’s surgery was successful, but she still needs a few more weeks of intensive care and observation. Without it, her body could start rejecting the new organ, or she could suffer an infection; any number of things could happen to this poor teenager, all of which lead to the one outcome this family is desperate to avoid.


“She used to smile all the time, dancing around the house. She never asked us to get her this or that, she never complained about anything. She’s the kind of daughter and sister that people pray for. I don’t understand why the universe is punishing her like this. We’re so close, the worst and most dangerous part is over. After going through so much, I can’t bear the thought of losing my daughter just because we couldn’t keep her in the ICU for a few weeks.” – Sajira, mother

Her mother, her father who is still recovering at home from his own surgery, her two brothers, an entire town full of well-wishers, are counting on you now to bring their precious Hiba home. After so much struggle and pain, they cannot lose her so needlessly. Donate now, and help create a happy end to this incredible story. 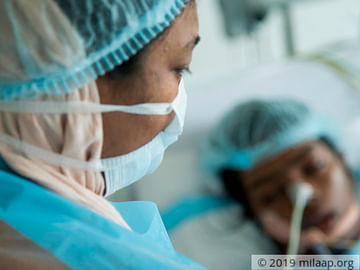 UPI: rzpy.givetomlpshaji000003@hdfcbank (Copy to clipboard)
Or
Click here to read the instructions before you make a bank transfer.