Forced To Stop Son’s Cancer Treatment, This Father Can Do Nothing But Pray To God To Save Him | Milaap
loans added to your basket
Total : 0
Pay Now

Forced To Stop Son’s Cancer Treatment, This Father Can Do Nothing But Pray To God To Save Him

Shares
Shares
Share on whatsapp
Instead of getting chemotherapy in the hospital, Hemanth is now at home in severe pain. He has missed his last 2 chemotherapy sessions, and will not be able to go for his next one too because his parents have nothing left to continue his treatment. Balraj, a teacher, hasn’t been able to work in 6 months. Now, he turns to Lord Ganesha for hope.

“I have faith that God will help me save my son. I go to the temple whenever I can, but I always begin my day with prayer. It’s the only thing I have left now.” - Balraj, father

The family during Diwali last year - praying for Hemanth's recovery

Hemanth stayed positive despite the gruelling chemo, but now he’s too weak to even move

Hemanth (14) has bone cancer. It was diagnosed in October last year. Ever since then, this class 9 student has not been able to go to school. For him, it’s the most difficult thing – to give on what he loves most, studying. Hemanth wants to be an engineer when he grows up. Earlier, when he was not in the hospital, he would be fixing a broken speaker and other equipment at home. But ever since they were forced to stop his treatment, he’s too weak to even move.


Hemanth with his parents during one of his earlier chemo sessions

“He has been a district level player for Tchoukball, a game like handball. Now he can’t even move. He used to stay positive even though the chemo was painful because he knew that he was getting better, but now it feels like all hope is lost. He barely talks anymore.”

Hemanth needs chemotherapy for the next 4 months to survive.

Balraj has had no income for the past 6 months

Balraj used to work as an English teacher at Krishnagiri Talent School in his hometown, Kothur. He hasn’t worked every since Hemanth was diagnosed with cancer due to his frequent hospitalizations. Hemanth needs help to even walk. Balraj and Navabharti now rely entirely on the kindness of their friends and relatives even for their meals.

“I’ve already borrowed over 6 lakhs for his treatment from my friends and family. They have been very supportive and did everything they can to help. But there’s only so much they can do. I have no income now, my son is not getting the treatment he needs because of our financial condition."

Hemanth’s next chemotherapy session is on Wednesday. The only way he can go to the hospital is if his parents get help to afford his treatment. Balraj and Navabharti can do nothing else but wait for a miracle – they are praying for one every day. Your support will help Hemanth fight cancer. He deserves this chance.

You are Hemanth’s only hope to get timely treatment and survive cancer.

The specifics of this case have been verified by the medical team at the concerned hospital. For any clarification on the treatment or associated costs, contact the campaign organizer or the medical team.
Click here to save Hemanth 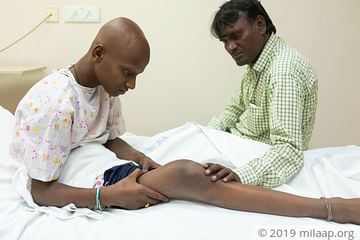 Hemanth has missed his last 2 chemotherapy sessions, he needs your help to get treatment.