They Don't Want The New House He Promised Them, They Just Want Him To Come Home | Milaap

They Don't Want The New House He Promised Them, They Just Want Him To Come Home 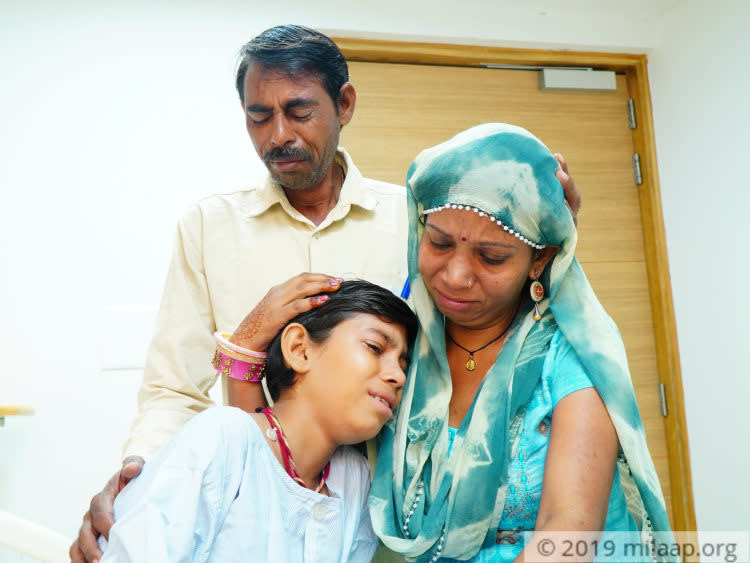 Share
My hands had been trembling as I went inside to collect the reports from the technician. He’d asked me for the name, and I told him my son’s name ‘Harsh’. I could feel my heart beat faster and faster as he went through the files on his desk. Finally he found the one we needed, went through the first few pages, then looked up at me sadly.
‘This problem is… too big for you,’ he said. ‘Just spend as much time with him as you can, then say goodbye. Your son… probably only has a few weeks left.’
– Suresh, father

Harsh (14) was at school the first time he fainted. His teachers had been alarmed, as he had been fine just five minutes prior. By the time Suresh had gotten to the school, Harsh was awake, but still dizzy. It took two weeks of running around to different hospitals and diagnostic clinics to figure what exactly was happening. During which Harsh grew increasingly weak and fainted multiple times. The diagnosis came in – he had Severe Aplastic Anemia, a rare blood disease, fatal if untreated.

“A doctor told us that unless he gets a bone marrow transplant, he will not… that he won’t make it. I just can’t believe any of this is real, that this is happening. Until two months ago, my son was fine. He was going to be an engineer. He would make these bridges and houses with matchsticks at home, saying he’ll make a real house for his mother one day. I can’t help but wonder, will he even be with us just a few weeks from now?!”

He has already tried selling a small plot of land he owned, but when that didn’t work he mortgaged it. Suresh works as a daily-wager, only able to support his family day to day. This kind of expense is completely beyond him.

“I used to go out at 6am and come home at 8pm. For what? For what?! I should’ve spent more time with my family instead. With my… my Harsh. But how was I to know something like this could happen?!”

His family is afraid for him, and they don't even know he's dying

Harsh’s whole family dotes on him. His mother Baladevi, his sister Nisha, and his younger brother Jeevan. He means the world to them, so Suresh hasn’t had the heart to tell them how bad Harsh’s condition actually is, that it’s fatal. They just know he’s suffering and needs treatment.

In this time of great distress, only you can save this family. Each donation made doesn’t just help afford the crucial surgery Harsh needs, but will prevent this family from suffering an incredible loss.
HK
Patient Harsh Kumar is 14 years old, living in Jaipur, Rajasthan
MH
Being treated by dr satendra in Manipal Hospital, Jaipur, Rajasthan