A Rare Cancer Is Feeding On This 5-Year-Old's Bones | Milaap
loans added to your basket
Total : 0
Pay Now

A Rare Cancer Is Feeding On This 5-Year-Old's Bones 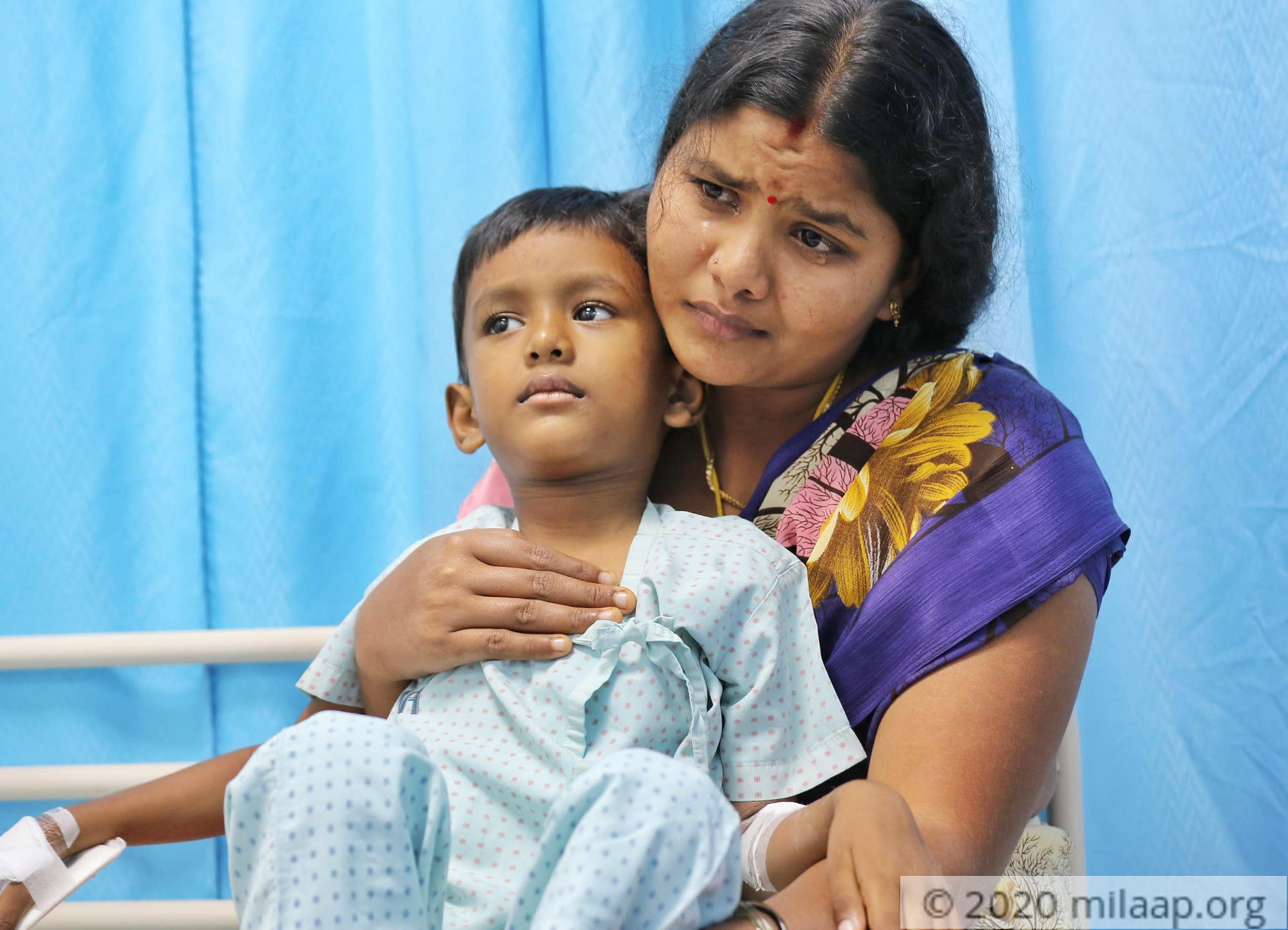 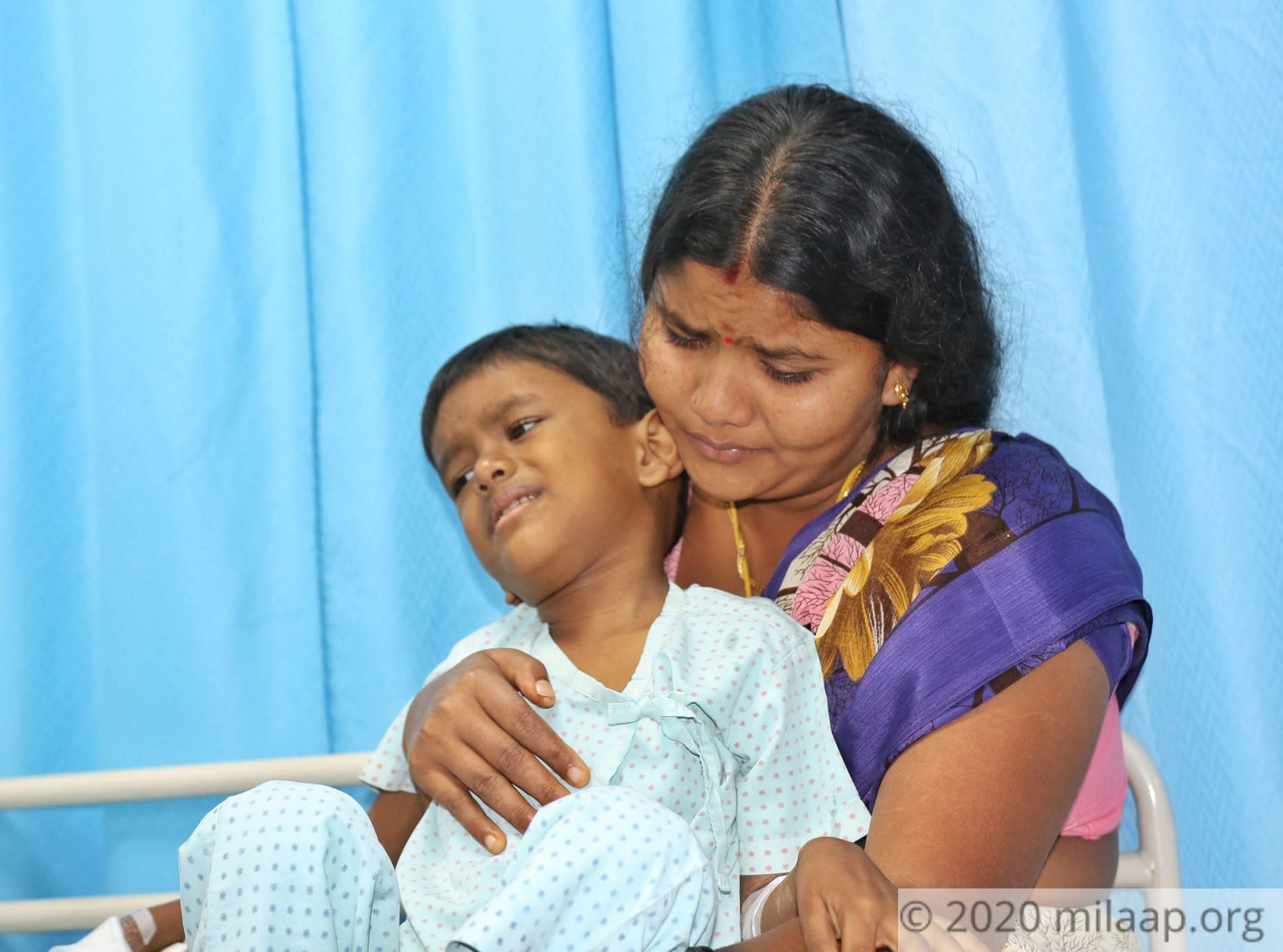 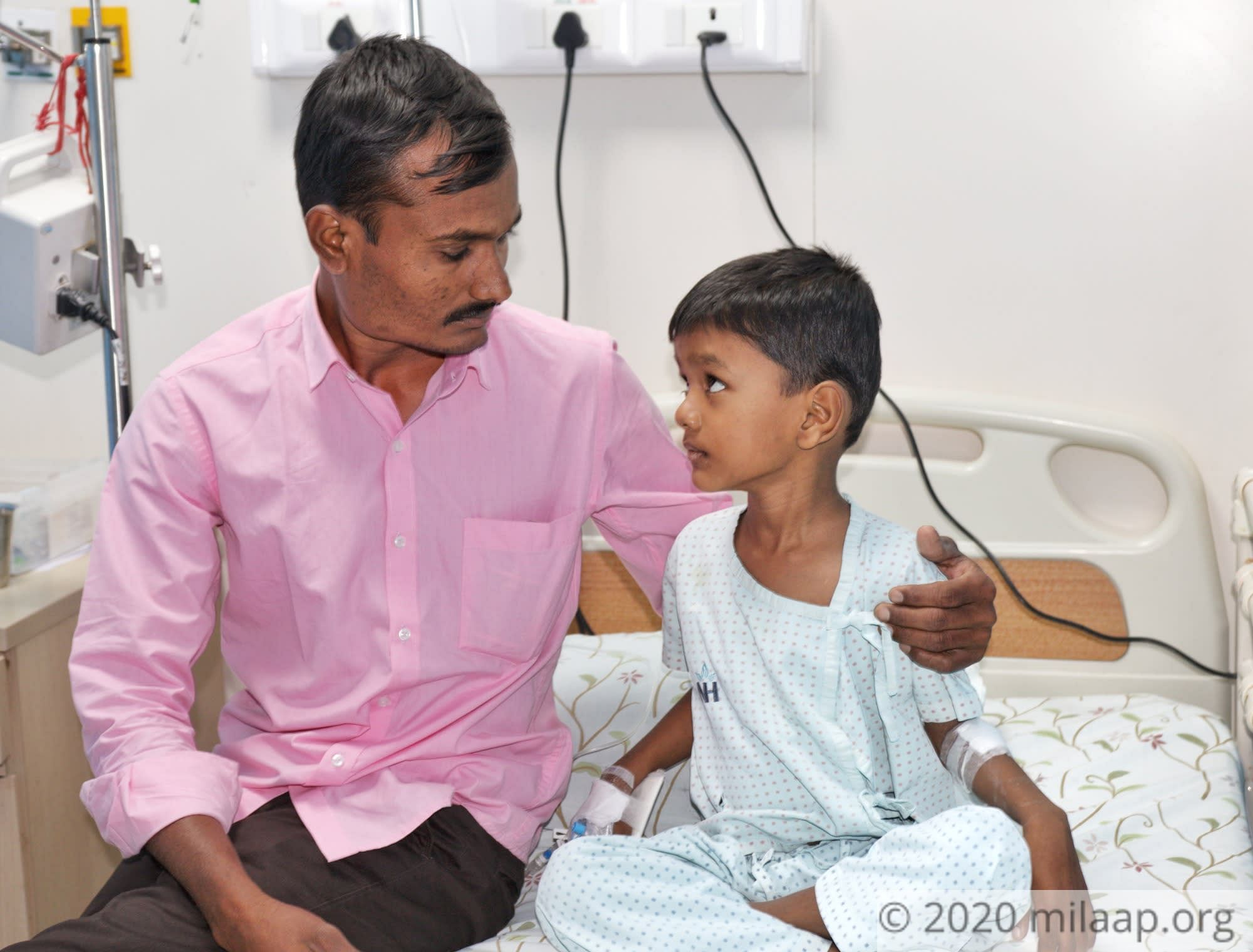 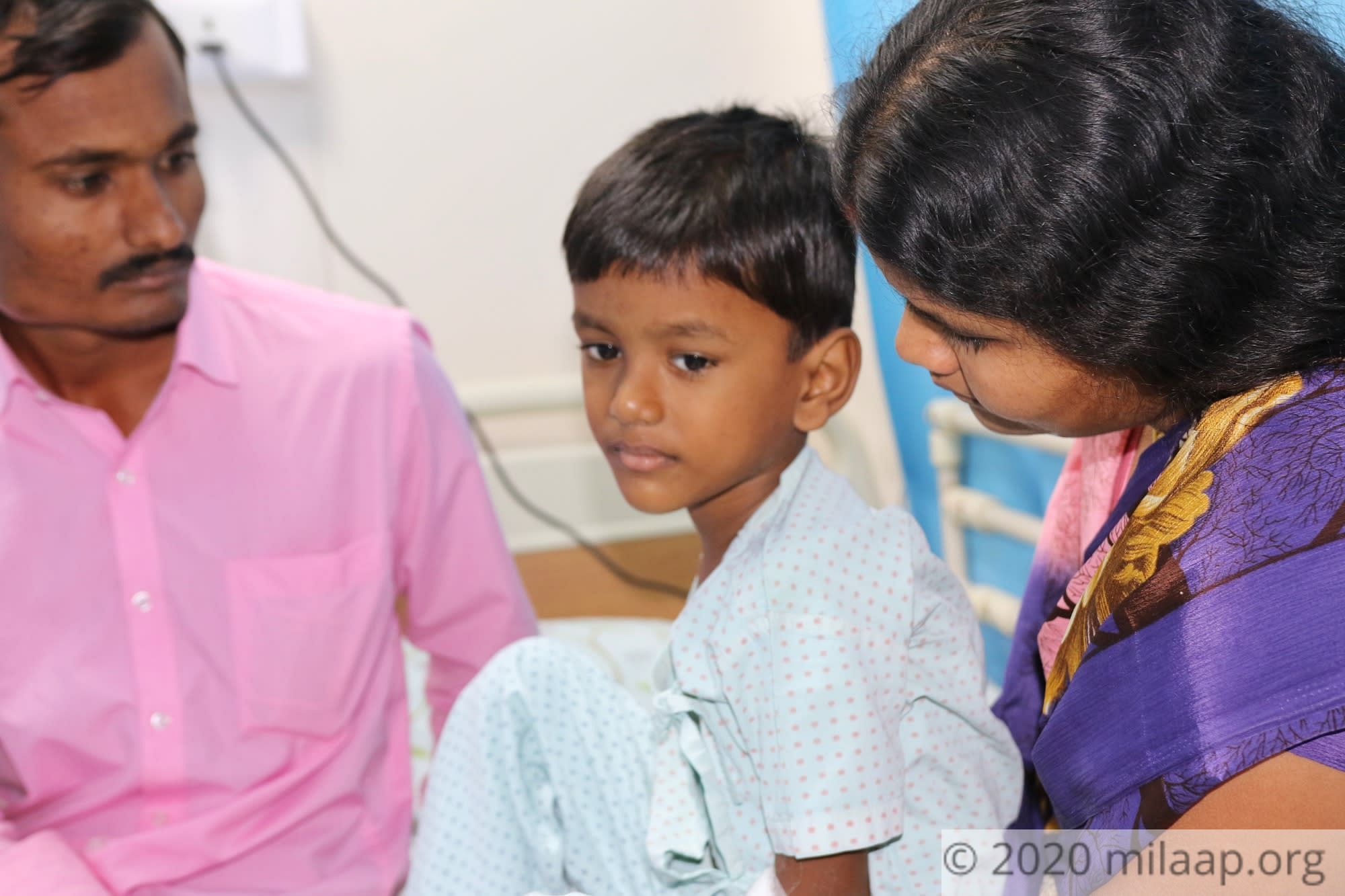 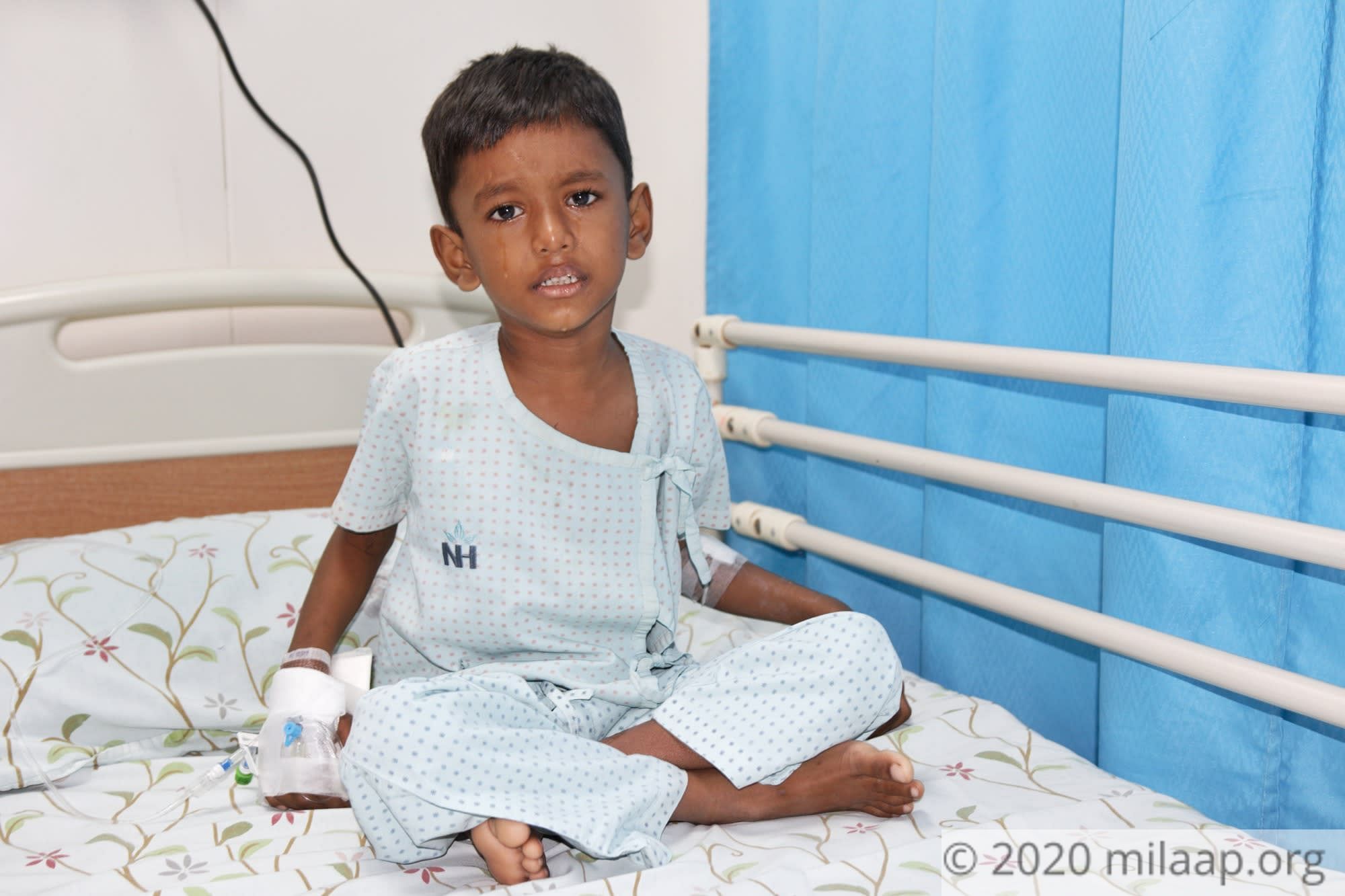 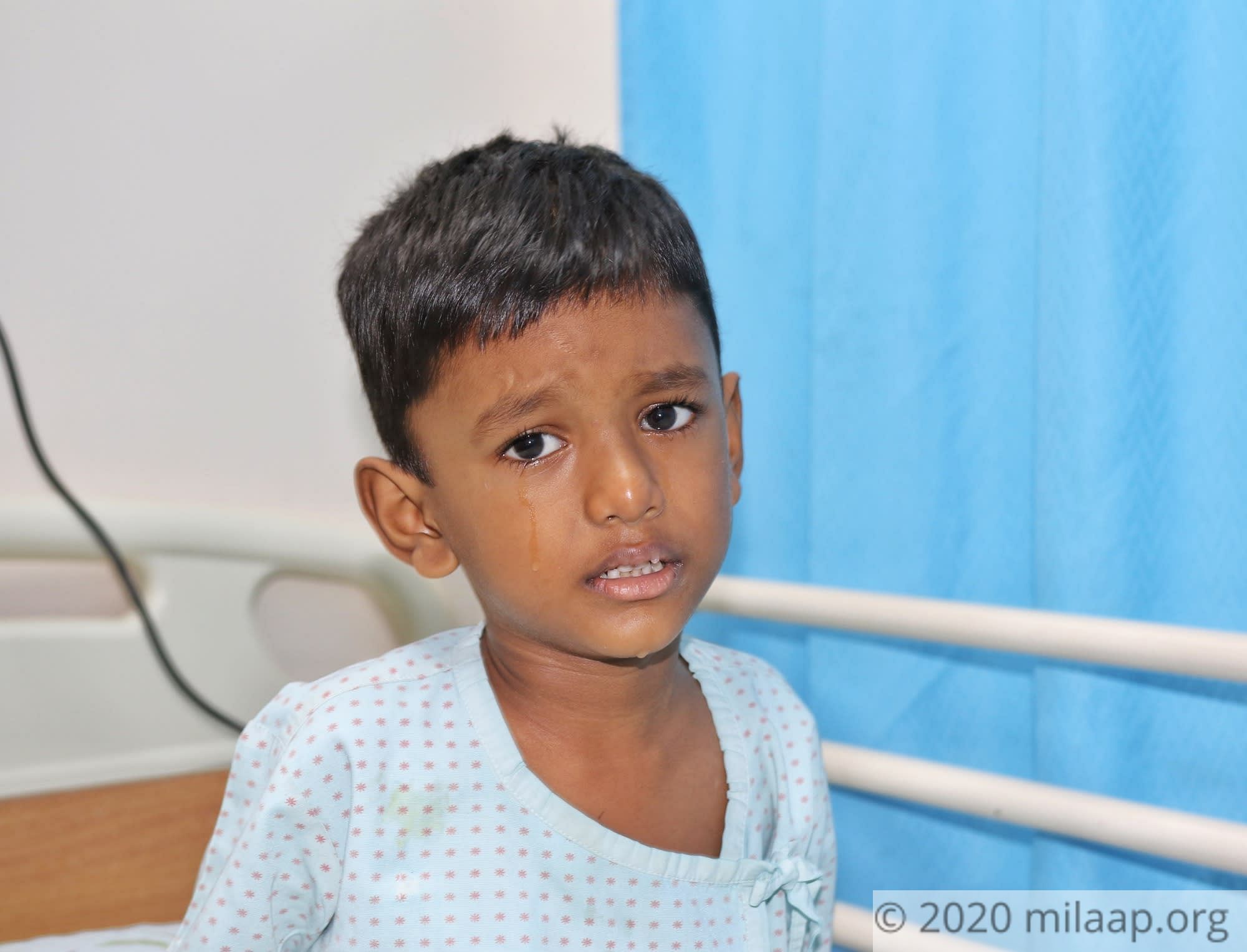 I still remember the day when Harish got sick. I had picked him after school and we were heading home on my cycle. Usually, he would talk a lot but that day... he was quiet. I noticed he had a fever, and took him to a local hospital. The fever went down that day, but the next morning when he woke up... he was bleeding from his nose and mouth. I was so terrified... – Murugan, father

5-year-old Harish was rushed to the hospital again and given more injections. But two days later, he started having the same symptoms. No doctors could diagnose his problem and his fever and bleeding kept coming back again and again. Soon he started complaining of severe back pain as well.

My son’s back and shoulders began hurting so much he couldn’t lie on the bed and refused even to sit. I had to carry him all the time. He was suffering but we didn’t know what was causing him his unbearable pain. Soon he refused to eat and his weight started reducing. We knew that we had to act fast… Or else our child would die in front of our eyes. – Meena, mother

Little Harish was soon shifted to a multi-specialty hospital in Bangalore where he was diagnosed to have Glanzmann’s Thrombasthenia, a type of cancer. In Harish's case, it has affected his vertebrae. His body has also lost its ability to clot blood, making it difficult for any bleeding to stop. This cancer is aggressive, and if not treated adequately he may lose his life.

They told us it is cancer, that there are five tumours near his spinal cord... It was those tumours that gave my child intolerable pain... They said the cancer had already spread to his bones and that my son will not survive if he doesn’t get speedy treatment. I remember wishing that I was having a nightmare, so I could wake up from it. - Father

Harish has already undergone two cycles of chemotherapy. But the cancer is so strong that only an urgent bone marrow transplant can save his life now. The whole treatment would cost around Rs. 19,30,000 and his father cannot afford it within this short span of time.

We moved to Bangalore two months ago and rented a house here as we cannot travel often from our village. As I'm a farmer, this means I haven't worked in these two months. To start his chemo, I had to sell a part of my agricultural land, and borrow money from lenders. But now it looks like chemotherapy won’t work and only a bone marrow transplant will save my child. How will I arrange this huge amount? The transplant is his only chance to beat cancer and I don’t have enough money save my little son’s life" - Father

Harish’s cancer is spreading fast and you are his only chance at beating it. Your kind contributions can bring a big change in this little boy’s life and even keep him alive. 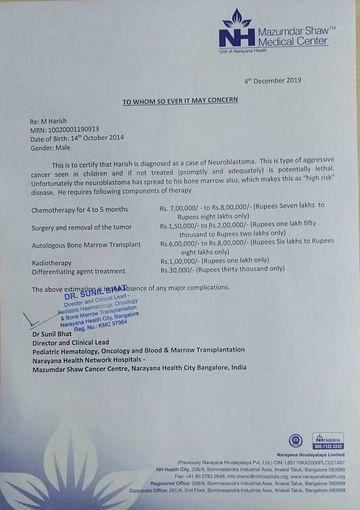 Click here to know more about Harish
Donate now
OR
Click here to read the instructions before you make a bank transfer.

I will pray for Harish and I strongly believe that he will recover and come back to you strong and healthy.May God bless him