This 12-year-old Tuition Teacher Is Too Sick To Eat Or Move And Needs Your Help To Survive | Milaap
loans added to your basket
Total : 0
Pay Now

DP
You are sending a message to
David Palepogu
Go back

Shares
Shares
Share on whatsapp
Esther wants to be a teacher when she grows up. More than going to school, she loves teaching the children in the neighborhood who flock to her house to clear their doubts. Once every 21 days, Esther starts having shooting pains in her body and she is too sick to even eat or move and needs a blood transfusion. The only cure is an expensive procedure her parents can't afford.


Esther at the hospital with her father

Esther's father David is a pastor of the church in Jammulapalem – a small village near Guntur, Andhra Pradesh. Esther is his first child and they found out she had Thalassemia Major when she was just 6-months-old. The nature of the disease at first left them shattered.


Esther at the hospital

“For at least a year after she was diagnosed – we were very upset. But with the doctor's support and counselling, we were able to accept it. Now, she needs blood once in three days and it is damaging her body. The doctor says we need to get a transplant for her to be fine,” David explains.

Esther has a severe form of Thalassemia – she is completely dependent on blood transfusions to live. Without transfusions, she will die. But the frequency of transfusions has created a new problem – deposition of iron in her soft organs like liver, kidney etc.

Already, 12 years of repeated blood transfusions are having an effect on Esther's health. Last month, she needed a liver surgery to remove a damaged part of her liver. Her kidneys are also at high risk. Her height and weight are low and she will slowly only grow weaker with time.

By a great stroke of luck, Esther has found a 100% donor match

Esther is the light of this small family and to see her suffer every month is very painful for these parents. They have to travel to the next town to get her blood transfusions. Even that is not enough anymore to completely manage her condition.

David makes Rs 4,000 a month as the pastor of a church. The family has never wanted for money, but Esther's last surgery put them in a debt of Rs 4 lakhs. They are struggling to repay the debt. But luckily, the family has found a donor whose stem cells is a 100% match for Esther.


“None of us in the family were a match for Esther and the next option was to find a match in an international registry. But we were lucky, because we found someone who is a 10 on 10 match. He lives in Chennai and has even agreed to donate stem cells to save Esther,” says David.

The only obstacle that now stands in the way is the staggering amount of money needed for the procedure. For a bone-marrow transplant that will save his child – David needs Rs 25 lakhs. It is impossible for him to arrange that amount – especially when he has not yet repaid previous loans.

Every time things have looked really bleak for this family, help has come in, saving them from a tragedy. This time, however, the family has no hope and no options let. Esther needs help getting better from a terrible condition.

Your contribution can save Esther and help her achieve her dream of becoming a teacher.

Supporting DocumentsThe specifics of this case have been verified by the medical team at the concerned hospital. For any clarification on the treatment or associated costs, contact the campaign organizer or the medical team. 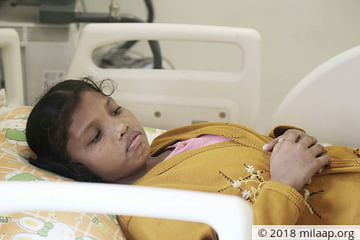 Esther's organs are getting affected by regular blood transfusions. A bone-marrow transplant is...