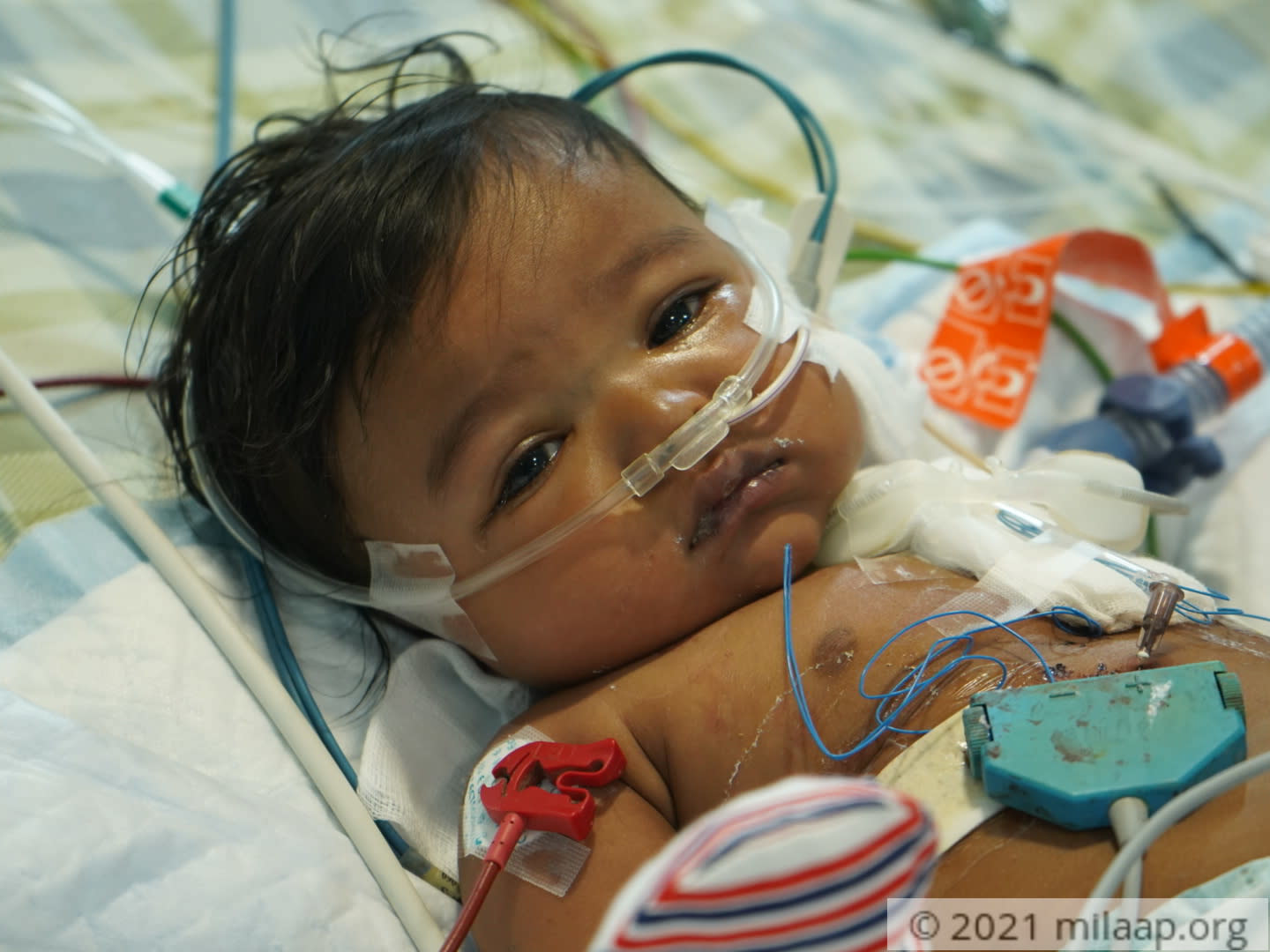 Share
Veeraselvi’s fear of separation from her child began just moments after delivery. She’d hoped to pamper him once she took him home, but she woke up to find out he was in the ICU, on the verge of dying. Separated from her child for 4 days, she was grief-stricken. Even worse was her state when the first time she could carry her baby was to travel by ambulance to a larger hospital.
Today, Esakki is 7 months old, and Selvi still fears losing him because of his deadly heart disease. With prolonged treatment, he can be cured. But they can’t afford it.

Turning blue just moments after his birth, the baby fought for life

All through her pregnancy, Veeraselvi had faced no complications. But soon after the baby was born, he turned blue and was rushed to the ICU. There, he was examined for three days…till the doctors gave up.

“The first thing I heard when I woke up was that my son wouldn’t survive! The first time I’d carried my baby in my arms, was to say goodbye…in case he didn’t make it. I wish no mother has to ever deal with that! We rushed him to another hospital. Thankfully, our baby made it through treatment; and was prescribed medicines that would keep him going! I honestly thought that was all. But…” – Veeraselvi, mother.

Just weeks after he turned 5 months, his health deteriorated. His nails and lips turned blue, and he was struggling to breathe. When rushed to the hospital, they were told he had holes in his heart. He underwent open-heart surgery immediately.

“He was so fragile; I wonder how he survived such a major surgery. It was done just in time, they told us. Had there been a delay, he’d not have made it. It killed us, to think of a life without our son. Just when we were beginning to relax, another storm came our way…” – Veeraselvi.

Baby Esakki is still not out of the woods. He currently has breathing issues. With the flow of blood redirected, his lungs have shrunk, and are collapsing. Without immediate treatment, baby Esakki will not survive. The treatment, along with prolonged stay in the PICU will cost another 1 lakh rupees, and the parents can’t afford it.

Chidambaram, a mason, is struggling to afford his son’s treatment

A daily-wage labourer, Chidambaram earns no more than 7,000 rupees a month. He has already spent over two lakh rupees in the past 6 months, and is struggling to repay borrowed loans. He’s in no position to afford the treatment. Your contribution, big or small, can help him.

“All I need is 1 lakh, to save my son. If I’m not able to save him, I can never forgive myself. The cost of his life, although one lakh, is so much more than that. In our dull lives he’s the only source of happiness. I've been roaming around for funds...unable to even stay by his side, when he needs me. We're struggling! Please help us save him!” – Chidambaram.

This baby hasn't seen life yet. It's too early for him to battle death. You can save him! Click here to contribute,
E
Patient Esakki is 5 months old, living in Thoothukkudi, Tamil Nadu
AC
Being treated in Apollo Childrens Hospital, Chennai, Tamil Nadu