Shares
Shares
Share on whatsapp
Diganth watched his older brother, Deekshit (7), get ready for school and copied his every move. He followed him to the mirror and picked up a small comb of his own, but when he stood in front of the mirror, he saw something terrifying.

Srinivasamurthy and Shobha were busy making plans for Diganth’s third birthday celebrations in 2017 in their tiny home in a village near Kolar, Karnataka. But Diganth started having a fever and he was given medicines to recover. But when his fever didn’t subside, his parents took him to Bangalore, Karnataka for better consultation. After some tests, Diganth was diagnosed with Acute lymphoblastic leukemia, a severe form of cancer that affects the white blood cells and is progresses rapidly if not treated on time.

After six grueling months of chemotherapy, Diganth started going to school and loved to spend time with his elder brother Dixit (7). But 5 months later, Diganth’s health started worsening and his worried parents took him to the hospital. Poor parents were utterly devastated when they were told that Diganth’s cancer is back and it is even more aggressive than before.


He ran to his mother, crying “ amma why is there blood in my eyes? Am I going to die?

Now, as he lies on the hospital bed, weak and sad, he begs his mother to take him home. All he wants is to be with his brother, go to school and play like he used to. “He even asks me to give him homework, he just wants to feel normal again,” says Shobha. But Shobha and Srinivasamurthy can’t take him home just yet.

"Cancer has taken away Diganth's smile. His eyes have turned extremely red and he has black patches under his eyes. Each day, he’s just growing weaker and every day cries he in pain. Only a bone marrow transplant can help Diganth fight cancer for good." - Shobha.

Srinivasamurthy earns Rs 9000 per month as a gardener in a factory and he can’t afford the bone marrow transplant that costs 40 lakhs.

“Every time someone asks me about Diganth I can’t help but feel fearful that I might lose my son. I will do anything to save him, but nothing I do seems enough – I can’t do it without your help,” says Srinivasamurthy, with his voice breaking.

Even your small contribution will make a difference to Diganth’s life – he can fight cancer for good with a bone marrow transplant. 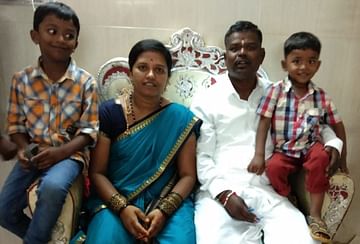