Farmer Who Already Spent 10 Lakhs Has Just 4 Days Left To Fund Double The Amount To Save His Baby | Milaap
loans added to your basket
Total : 0
Pay Now

"If I even breathe in his room or open my mouth to talk, he starts sneezing and coughing. Immediately he gets an infection. Antibiotics will not work anymore. He will die if he catches another cold." - Gopal, Father

Dheeraj is 9 months old. His father is afraid to touch him as an infection could kill him. The only time Gopal risks infecting Dheeraj is when they travel to the hospital. These visits have gotten more dangerous because Dheeraj's immune system is extremely weak. He needs a bone marrow transplant on 10th April. There is no more time to waste.

'I don't know what is worse, the risk of infection at home or at the hospital'

Dheeraj had just turned 6 months old when he had his first fever. Gopal and Vanaja went to the local hospital where he was due for vaccinations anyway. He was on paracetamol for the fever. 10 days later, when he still had a high temperature, it became apparent that the medicines were not helping.


"We noticed he had rashes all over the body. I took him to a hospital in the city, where they found out that his white blood cells are damaged. They said he could die if he gets a cold. Staying at the hospital amongst all the sick people was dangerous. Staying at home was even more dangerous because there is no filter for the air here."

'We are convinced that this treatment will save his life'

Gopal and Vanaja wanted to gather as much information as possible about Dheeraj's condition. They spoke to friends and family, and finally travelled to Tumkur to meet an acquaintance whose child also suffered from the same disease.

"They told us that bone marrow transplant was the only cure and referred us to Aster. Their son is fine now and it gave us hope. By the time we got here, Dheeraj was very sick. Everytime I held him, he only got worse. He had wounds all over his skin and the pain had him crying nonstop."

Dheeraj is on heavy medication but none of that will cure him. Gopal is a farmer. When blessed with good rainfall, he makes Rs. 30,000 a year. Otherwise, the family depends on loans for a living. Despite his situation, Gopal spent Rs. 7 lakhs on Dheeraj's treatment at the hospital from the money he got after selling a piece of his land. He did not hesitate when he discovered the cost of a bone marrow transplant. Instead, he asked for 15 days to do what it takes.


"I cannot ask for another loan while I am stuck paying a huge interest on the 3 lakhs I just borrowed. It takes 25 lakhs to save my son, right now we need 16 lakhs. He would have to be in the hospital for 35 days after transplant. For one year after that, he still needs medicines and treatment. I could no longer afford the hospital bills. So I brought him home. I sold another portion of our land. I still have not received money. I had to take a loan to buy AC and air purifier for his room. I have made sure it is as hygienic and safe as the hospital."

Only Vanaja is allowed into Dheeraj’s room. Their 3-year-old son Litin is now living with his grandmother. Gopal gets to see his son through the windows which are sealed to keep out germs in the air. If he gives in to his emotions and rushes in to comfort his crying son, Dheeraj’s condition worsens and he has to be rushed to the hospital in an ambulance. With 4 days to go for the transplant, Gopal remains determined to come up with the funds.

“I am going to everyone I know to collect money. With that I can admit him, but paying for the transplant? I don’t know how I will accomplish it. I need all the help I can get.”

Dheeraj has hardly seen life. No doubt, Gopal will do anything it takes to fund this transplant but he also risks Dheeraj's future. Gopal has already spent 10 lakhs and can't afford any more. Your contribution can save Dheeraj's life and save this family from a lifetime of misery.

You can save Dheeraj
Donate 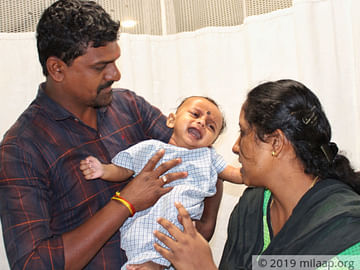 Gopal is selling his land to pay hospital bills. Now he has nothing left to sell to save his son.