His Brain Cancer Has Already Taken His Legs, Without Urgent Help It May Take His Life Too | Milaap
loans added to your basket
Total : 0
Pay Now

His Brain Cancer Has Already Taken His Legs, Without Urgent Help It May Take His Life Too

Shares
Shares
Share on whatsapp
When a child starts vomiting up to three times a day, all parents fear the worst but it usually ends up being food poisoning or a stomach infection. In little Debojit’s case, however, it was brain cancer.


“A few days after he first vomited, we noticed he was starting to sway whenever he walked. Soon it got so bad that he couldn’t walk even two feet without collapsing. For ten months we took him to more than 15 doctors, but nobody was able to figure out what it was. Then finally we discovered it was a form of brain cancer, and that too one of the rarest in the world.” – Putul, mother

Despite being a single mother working as a helper in a small clothing store, Putul tried her best to save her son’s life. The doctors had said Debojit would need a surgery and radiation therapy to completely get rid of the tumor in his brain. In April, she had been able to put together enough money to afford the surgery, after selling whatever jewellery she still had left, and by taking loans. But his radiation therapy is scheduled for this month, and she is nowhere near having the necessary Rs 1,10,000.


"I am trying my best...I am doing everything I can. But it's not enough. I am living my life for my two sons. All my hard work will go in vain if I can't save Debojit."

With his condition getting worse and worse again already, if Debojit doesn’t get the radiation therapy now, he may not have long to live. His loss would create an irreparable hole in his mother and brother’s life. So please donate whatever you can, and help this small family. 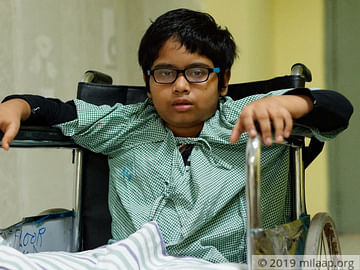