This Widowed Mother Is Begging On The Street To Help Her Son Get Chemotherapy For Cancer | Milaap
loans added to your basket
Total : 0
Pay Now

Shares
Shares
Share on whatsapp
26-year-old Debabrata Bhattacharya has been diagnosed with Germ cell tumors in his body. His 53-year-old mother Nirupama is helplessly begging on the street hoping to collect enough money for her son’s treatment. 5 years ago Debabrata also lost his father to a blood cancer due to a lack of funds for treatment. Nirupama cannot lose her only reason to live but has no way to provide him with the specialized medical care that can save his life.

All panic struck when Debebrata noticed the blood stains.

Debabrata used to work at a small provisions store as a helper, earning a meager income to support his mother and himself. When he noticed that he had vomited, with stains of blood, he knew it was something serious.

"When we went to the doctor, the scans showed there was a lump inside his chest. A biopsy brought our worst nightmare. Debabrata has cancerous tumors that need immediate treatment otherwise I will lose him just like I lost my husband."

He lost his father, unable to afford treatment

Debabrata’s father had also been diagnosed with Blood Cancer. The family begged and borrowed but could not pool enough to treat him. Unfortunately, they had to helplessly watch him die a slow, painful death.

"I have seen my husband go through the same thing. I know what it takes to fight the disease until the last dying breath. If I need to protect my son from the same fate, he needs 4 cycles of chemotherapy."

She is now begging to collect alms for his treatment

Debabrata’s mother Nirupama is completely broken now. With no means to save her only son, the widowed mother is now forced begging for alms on the streets to continue his treatment. With some support from her neighbours and distant relatives, she has obtained the diagnosis and provided him with medical care so far. However, she has no way to arrange for the funds needed for chemotherapy.

With some support from us, she can save her son’s life

Starving herself, and begging on the streets, Nirupama is feeling the same helpless feeling again. If this continues, she will fall sick as well. This mother and son do not have anybody else, and are now completely depending on your mercy.
Contributions collected through this fundraiser will go towards Debabrata’s chemotherapy. This is the last hope for the poor mother to save her son’s life.

Click here to contribute to Debabrata or for more details on this campaign. 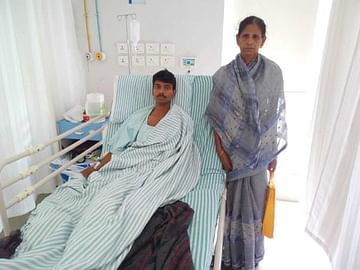 Help Nirupama's Save Her Son From Cancer

Starving herself, and begging on the streets, Nirupama needs help to save her son from cancer.