Even After 3 Years Of Surgeries, Chemotherapy, And Pain, This Teen Fights To Survive | Milaap
loans added to your basket
Total : 0
Pay Now

Even After 3 Years Of Surgeries, Chemotherapy, And Pain, This Teen Fights To Survive

Shares
Shares
Share on whatsapp
14-year-old Chandrabhan, has gone through it all, thanks to his 3-year-old friend, Cancer! Hospitals are now his home, and he has accepted the fact. But that does not mean he has given up. He has been fighting sticks and stones to get through this and get back to the routine life of any teenager! He longs to just go out of the hospital or his house and enjoy the world as is, but he does not even have the freedom to do that at this point.

He kept saying it feels like he should get it amputated as the pain was unbearable!

Chandrabhan has Myelodysplastic syndromes (MDS) which is a group of cancers in which immature blood cells in the bone marrow do not mature. There are no early symptoms. And by the time it is diagnosed, it is in an advanced stage. Children with this disease cannot survive for more than 5 years. They need a bone marrow transplant if all other treatment fails.

“It started with a drastic loss of his diet! It had been almost a month since he started saying he is not hungry. We thought it was odd but we brushed it off thinking he is just being a teenager! One day all of a sudden his leg started hurting. He kept saying it feels like he should get it amputated as the pain was unbearable! We took him to the doctor and then they ran some tests. It has been a downhill slope ever since.” - Sangeeta, Mother of Chandrabhan

His face was swollen to twice its size and his skin & nails were turning black, in addition to all the hair fall

“A few weeks back his whole face was swollen like a balloon! It was almost impossible to recognize him. Then his skin and nails started turning black. Before that he needed to get surgery on his head since from nowhere he developed a blood clot and had to be surgically removed. All this, in addition to chemotherapy, had made him so weak that he was prone to even more infections."

Against all our prayers, he then got Jaundice. You can still see the yellow tinge on his skin. He has hardly recovered from one disease when another one takes over. How can a young boy take so many attacks? He has done it but I am scared to think for how long can he go down this path?”

Suryam and Sangeeta live with their two sons, Chandrabhan and Nikhil in the village of Parvani. As farmers, during better times they can earn around Rs. 7500 a month! 3 years of treatment has already scratched out any of their savings, earnings, and borrowings! He probably has less than two years left without treatment. Losing any more time means losing hope.

At this point, they are beyond helpless. Only you can save this boy before it is too late. 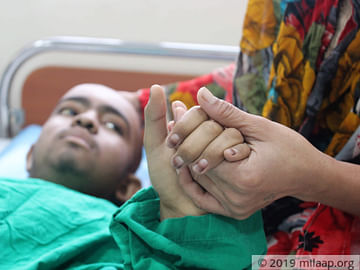 You can help Chandrabhan beat this disease once and for all.