‘I Can Barely Stand Due To Unbearable Pain. Please Help Me Walk Again, So I Can Work.’ | Milaap
Receive tax benefits by donating to this cause.

‘I Can Barely Stand Due To Unbearable Pain. Please Help Me Walk Again, So I Can Work.’ 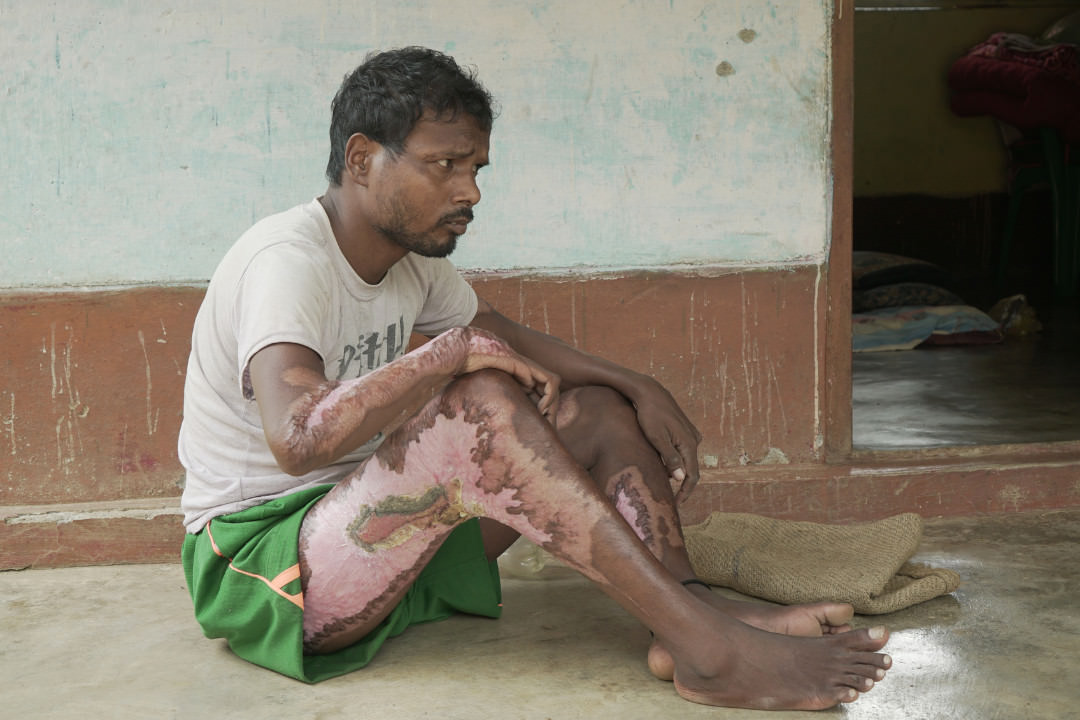 “I don’t know how I fell down. One moment, I was standing in front of the choolha (floor of furnace), and the next, I was feeling a burning sensation on my skin. I had no control of my body, and I didn’t know what happened. There was no one at home, and I couldn’t even cry out for help. Everything went blank after that…” - Birsha Oraon

35-year-old Birsha had been home alone one morning, cooking before he had to head into the farm where he did labour work, when a seizure gripped him. His wife, and his parents had already left for work, while his child was out playing. He hadn’t even seen it coming, and as his trembling body collapsed to the ground, and the contents of the pan he had been cooking on also fell on him.

Recalling the horror, Sujata, Birsha's wife, says, "I was on my way to work when someone informed me about my husband. I rushed home, there was no one. I took him to the clinic all by myself." Birsha’s seizure, however, didn’t come as a huge surprise to his family. “He has been suffering from epilepsy for a long time. But none of his episodes had been as severe as the one he had that day, that caused him to fall unconscious like that and hurt himself so gravely.”

‘I took me 4 days to regain consciousness, I couldn’t believe what had happened’

The family had to shuffle between several hospitals with an unconscious Birsha, and had no knowledge of the medical procedures he would need to undergo. His body sustained third-degree burns from the scorching hot oil and the pain had knocked him out of his senses for nearly 4 days.

“They kept referring us to several different hospitals for specialised care, but we didn’t even have enough money to get him a doctor’s consultation,” Sujata explains. The lack of money stood in the way of Birsha availing proper treatment. She also adds that Birsha now finds it difficult to carry out daily chores due to the double whammy of seizure and burns. “At times, I have to help him go to the washroom and clean."

He has a family to feed, but he is unable to work and earn a livelihood

Both of Birsha’s legs have significant injuries and are weak since the incident, due to which he has difficulty standing up for long hours. He has to drag himself everywhere, and even needs assistance to use the toilet. But his family is his first priority, and he cannot remain indisposed at home or they would have to starve.

“These past few months, we have been dependent on my wife’s income of 2,000 rupees. I saw how much they struggled, while she tended to my injuries with medicines bought from that money,” Birsha’s words are laced with despair and guilt for having left his family to fend for themselves. “I go to the fields now, but I have to sit down and do my work. Spending all day under the scorching sun irritates my burns tremendously, but I have to do what I have to in order to support my family.”


Birsha’s employers have cut down his wages because he cannot work the way he used to. Looking for another job is not an option, as he is unable to complete tasks in a timely manner due to his injuries, and no one is willing to hire him either. “What I seek for is your help in getting proper treatment. I want to get treated, so I can work like I used to and earn enough money for my family’s sake.” Birsha humbly appeals.

The family had already been struggling financially in the aftermath of the pandemic. But now the lack of funds have not only crippled the breadwinner, but also stalled their dreams. While Birsha is currently struggling to stand, your generous help can prompt him towards a better life. Click here to donate.
BO
Patient Birsha Oraon is 35 years old, living in Jalpaiguri, West Bengal
AC
Being treated in Aster CMI Hospital, Bengaluru, Karnataka