All Her Life Bhuvaneshwari Has Struggled To Raise Her Children, Now Battling Her Life In The ICU | Milaap
loans added to your basket
Total : 0
Pay Now

You are sending a message to
jegatheesan Rathakrishnan
Go back

All Her Life Bhuvaneshwari Has Struggled To Raise Her Children, Now Battling Her Life In The ICU

Shares
Shares
Share on whatsapp
I told my mother that she was going for a brain scan, while she was actually going for a surgery. The fear of being operated would kill her.
Bhuvaneshwari, my mother, is 43-years-old. My father, mother and my younger brother stay at Trichy while I stay in Chennai. We were leading a happy life. Although we couldn’t afford the luxury, we had a lot of peace and happiness until my mother developed frequent headaches.

A slight headache turned to be symptom of something fatal

Last month, while doing some household activities, my mother developed a pain in her head. We neglected it for some time thinking it would be due to fatigue. But soon we had to rush her to the local hospital. We were relieved to hear from the doctors that it was just like a normal headache and there was nothing much to worry about.

But soon her condition deteriorated within a span of two days, which alarmed us. She had a terrible headache throughout and no crocin, no painkillers worked. We again took her to another hospital. I understood that this was not a simple headache but I did not imagine it would be fatal. My mother was diagnosed with a blood clot. We were devastated to hear this.
She was suffering from Endovascular Aneurysm Coiling - a situation where there is not enough blood circulation in the brain.

The reward for all her sacrifices in life is really unfortunate
All her life, she has been struggling to bring smiles on our face. I still remember my childhood days when my father would remain outside throughout the day for his work. But there was always someone to cater to our needs. We always knew that whatever happens, mom would be there to take care of us. But now, for all the sacrifices she has made, it is really unfortunate to see her struggle like this. This is what she gets in return?

Surgery was the only ray of hope
The local doctors at Trichy advised us to get her treated at Rama Chandra Medical Centre. We immediately came to Chennai on 9th August 2017. “Mrs. Bhuvaneshwari needs to be operated at the earliest. Her condition is really critical. An urgent surgery is the ray of hope now”, said the doctor.
This news took a very heavy toll on us - both financially and emotionally. The very thought that we might lose her broke me. But I knew I had to do something to save her.
The cost of the surgery was almost around 8 lakhs. My father and I tried every possible means to arrange the funds. We took loans from relatives, friends. The only picture of me and my mother going back to Trichy was stuck to my head.

The 5 days in the hospital was petrifying

She was admitted to the hospital on 10th August. To see her in the ICU was extremely heavy on us. We had a glimpse of her when she was with wires and tubes all around. For those 5 days, she went to coma and she wasn't even responding well. But we did not give up hope.

Although Bhuvaneshwari was operated, the family is under heavy debt. She is now at home but bedridden. The post surgery expenses are also extremely high.
Bhuvaneshwari's husband, Rajendran is an electrician while her elder son, Pandian works in a private company in Chennai. They both earn just enough to keep the family going. While the younger son is still a student. They have exhausted all their savings, exhausted all means to arrange funds and now is left with nothing. Our support will give back a loving mother to the family. 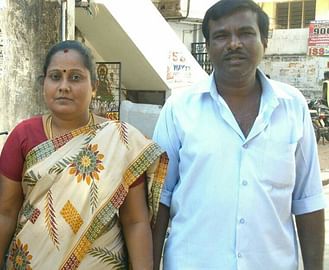 A slight headache later turned to be blood clot. She needs a brain surgery at the earliest.