Our Son Cannot Even Recognise Us Because Of His Failing Liver, Help Him Get A Transplant | Milaap
Receive tax benefits by donating to this cause.

Our Son Cannot Even Recognise Us Because Of His Failing Liver, Help Him Get A Transplant 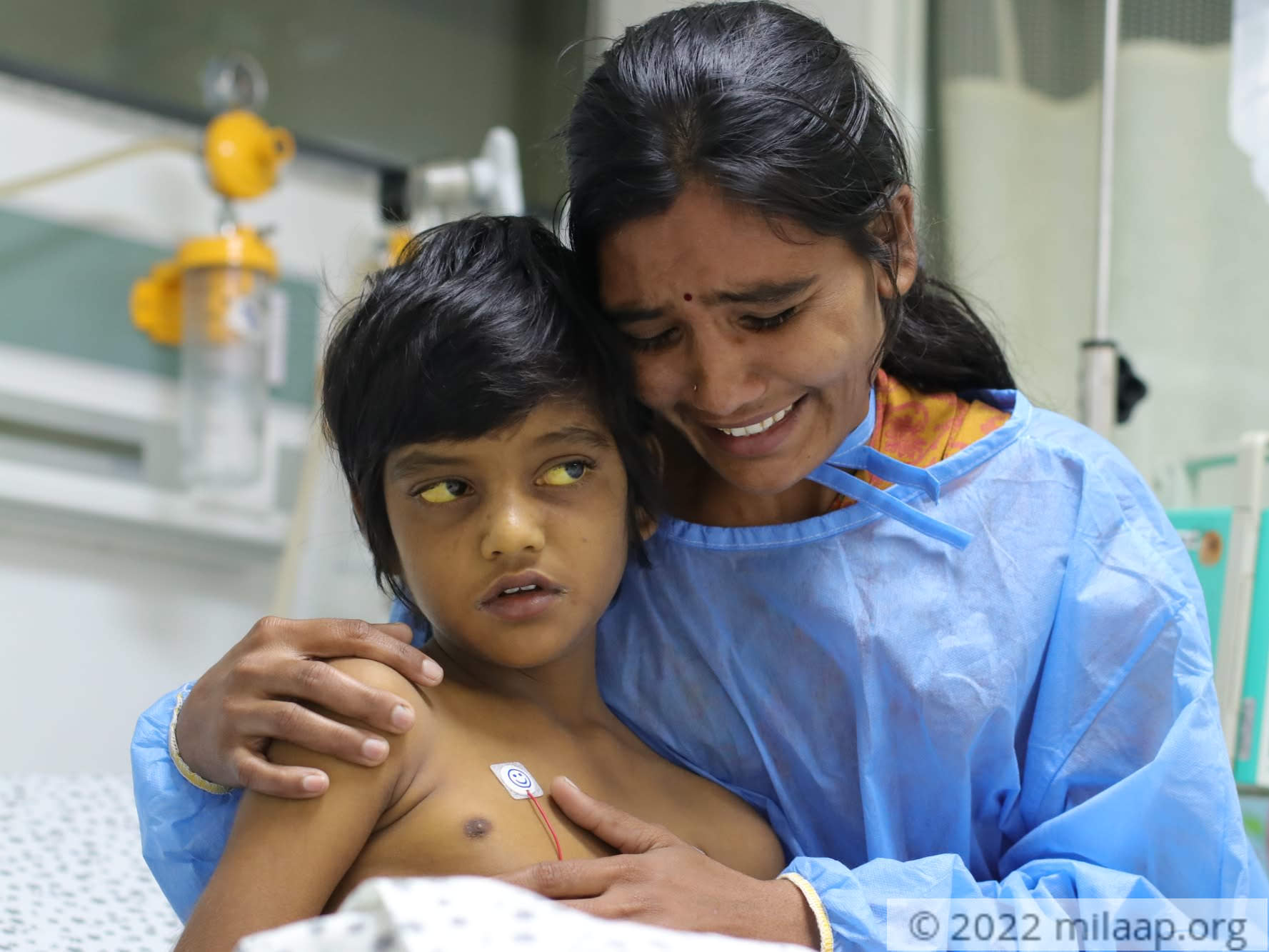 "Months turned into weeks, and weeks into days, but we are still struggling to get his transplant done. Just a day ago, he was trying to utter something but instead of words, foam gushed out of his mouth. Within a minute, he became totally unresponsive and had to be put in the ICU. This liver disease has wrecked my son's life, ravaging not only his liver but also his brain and now he is failing to recognize us even. I'm terrified that if we don't hurry soon, my son will not even have a few hours to live. "- Rajesh, father

His persistent jaundice has scarred his liver completely

For Rajesh and Poly, time has been ticking away to save their son's life. For the past 10 months, they have been frantically hopping from one hospital to the other with their 9-year old son, praying somebody would get their son's jaundice in control. They were scared seeing his eyes yellowing and web-like blood vessels on his skin's surface. After several tests, his parents found out that jaundice was just one of the symptoms of another terrible disease lurking in his body, called Wilson's disease.

Pavan's liver is unable to filter out excess copper from his body, leading to a toxic build-up in all his vital organs, including the brain. All this delay in diagnosis, unfortunately, has now made Pavan surpass the stage where only medicines could help his scarred liver. He needs an urgent liver transplant, but the cost of this surgery is beyond his parents' financial capacity.

"No matter how many times they drain the excess fluids out of his stomach, it still keeps bulging out. His bilirubin levels keep shooting up, leaving him in a debilitated condition all throughout. It was only when they tested his eyes, they spotted rings of copper deposits around his cornea…confirming his liver failure. Just when we were trying to wrap our heads around this devastating news, the doctors informed us that this toxicity has also started damaging his brain and it will only be a matter of time when his other organs will start shutting down too."- Poly, mother

Heading towards a permanent brain damage, he needs this transplant urgently

Pavan's decompensated liver disease has also reached his brain now causing severe neurological repercussions. Currently, critical in the ICU, his body is giving up without a functioning liver. Despite his father being eligible to be his donor, the only thing that's stopping them from getting this transplant is the lack of funds. A constant fear of losing their child is looming over these tensed parents, who have nowhere to go now for help.

"All 3 of us are surviving on that one meal given to our kid in the hospital. I earn Rs.250-300 daily from the labour work and now to even think of single-handedly gathering 18 lakhs, is sending chills down my spine. Last week, we had to just stop his blood tests because we feared if those bills kept mounting, we would not be able to keep him in the ICU even."- Poly, mother

With this transplant, there is not only a major chance of reversing Pavan's brain damage but also can help him survive. Please come forward to help Pavan get a life-saving transplant by clicking here.
BP
Patient Bhukya Pavan Kumar is 9 years old, living in Hyderabad, Telangana
RC
Being treated in RAINBOW CHILDREN HOSPITAL, Hyderabad, Telangana